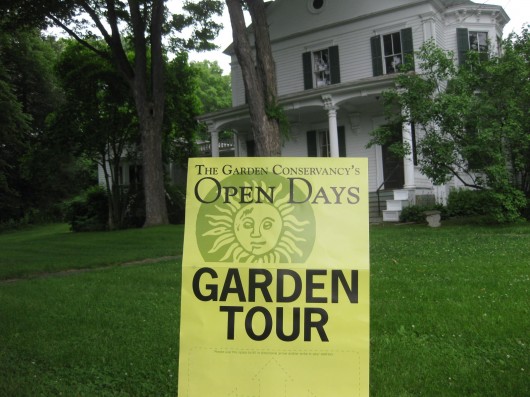 LAST SUNDAY, nearly 200 friendly faces passed through my garden gate. The occasion? The first “Open Day” of the season. Open Days benefit The Garden Conservancy, whose mission is (among other things)  the preservation of historically significant gardens. If you are unable to visit the grounds here in person, perhaps I can offer you a brief “virtual” tour: 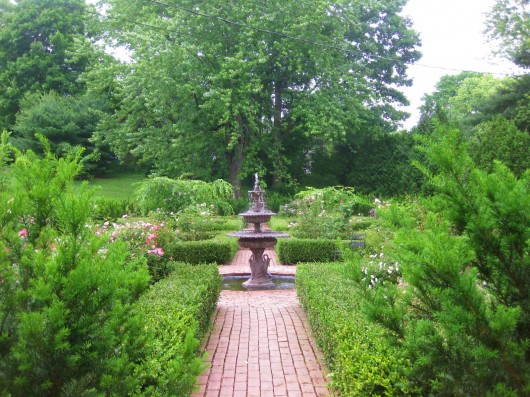 Open the garden gate, and you will find yourself in a rather formal rose garden. The roses are framed with 320 boxwood plants, most of which I grew from cuttings. Although the garden might look as old as the house (the house was built in 1826), it is in fact only 8 years old.  In a previous life, the garden was a parking lot, completely paved with asphalt. 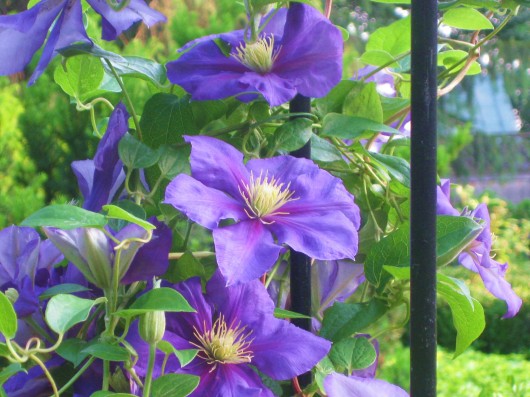 Roses aren’t the only flowering subjects in the garden. Lately I’ve started to add clematis. Pictured up top is  ‘Anna Louise,’ a large-flowered hybrid with striking, violet-purple flowers and a deep red bar. 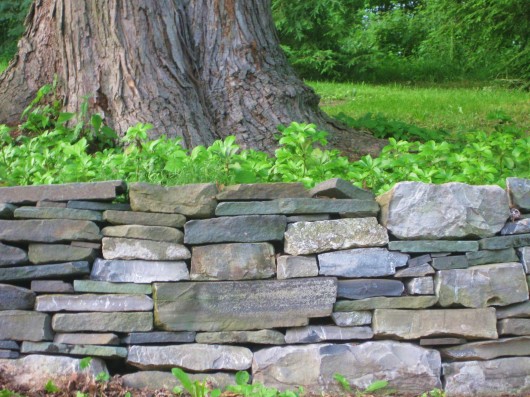 If you continue north to end of the brick path, you’ll find an ancient silver maple, just where the property begins to slope upward. I built a stone retaining wall around the tree, in order to plant a bed of pachysandra there. The stone came from an old foundation I found buried on the property. 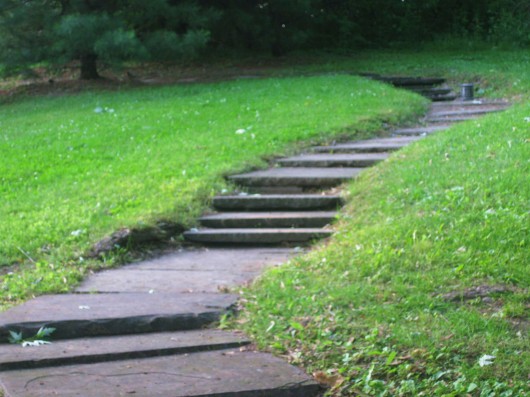 To the right of the tree, and still continuing north, is a curving flight of steps. The steps are composed of blue-stone. Let’s climb it.

The steps terminate at a grove of white pines. Why? Because, 7 years ago when I built the path, I ran out of blue-stone. Furthermore, because I’d pinched out the candles of the pines each spring, they had grown so densely that you could not pass through them.

But recently, when I found throw-away stone for free, I decided it was time to continue that path through the pines.  Consequently I cut several branches, and formed an arch-way.  This provided an opening with the following view: 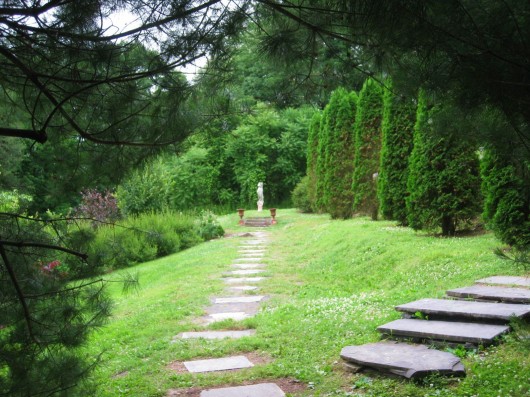 For me,  standing under the archway, with a view of a beckoning (and headless) Venus de Milo,  is a mystical experience.  Because I had only so many pieces of stone, I spaced them far enough apart just to reach the brick steps (between two urns) which climb to the statue.

The tall arborvitaes on the right help to screen out the in-ground swimming pool. The little staircase leads to the pool’s eastern gate. 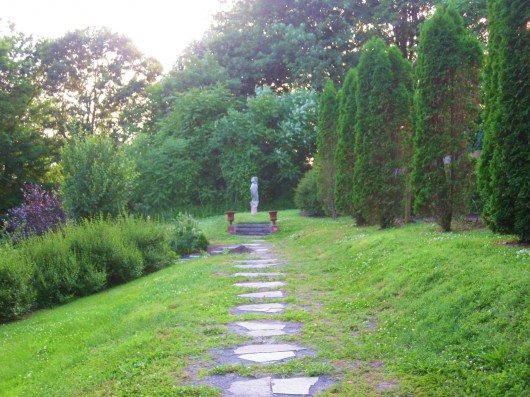 The odd-shaped stones are set in stone-dust, and buried just deeply enough to be level with my so-called lawn. This way the mower can run right over them. I’ll plant actual grass seed around the stones when autumn arrives. Well, that is the plan, anyway.

If you hang a right just past the statue, you’ll come face-to-face with… 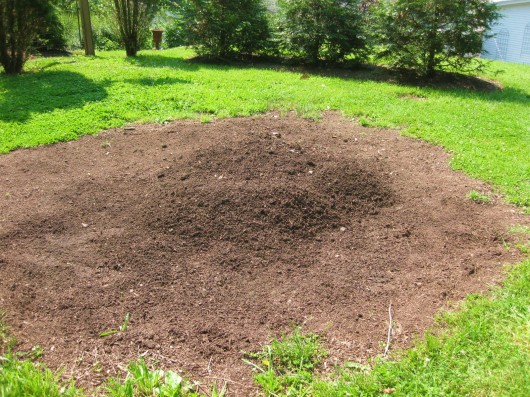 …the remains of a mulch-pile. Whoops. I tried to remove this eyesore before the Open Days tour. In fact, my partner and I awoke at 5:00 that morning with the sole mission of relocating the mulch to a holding place elsewhere on the property. But no sooner had I begun to shovel it into a wheelbarrow than I pulled my back out. So the mulch pile remained. Trust me, it will be gone in time for the next tour. 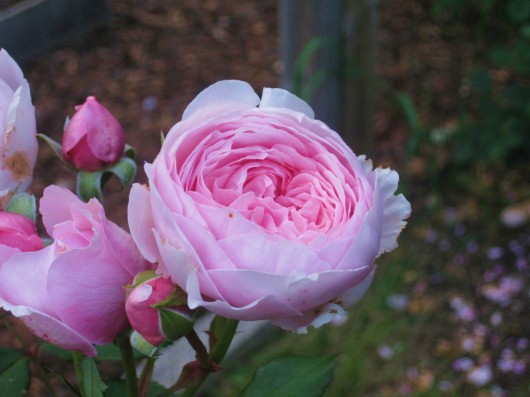 Anyway, to the left of the mulch is the Kitchen Garden, the gate flanked by a pair of Rosa ‘Gertrude Jekyll.’ I hope you have this David Austin-bred “English” rose on your property. Its honeyed breath is both intoxicating and far-reaching.

If you’re wondering, Ms. Jekyll was a late-19th-century gardener and landscape designer. I’ll wager that Gertrude saw (and smelled) far worse things in her day than my  innocent pile of not-yet-used mulch. 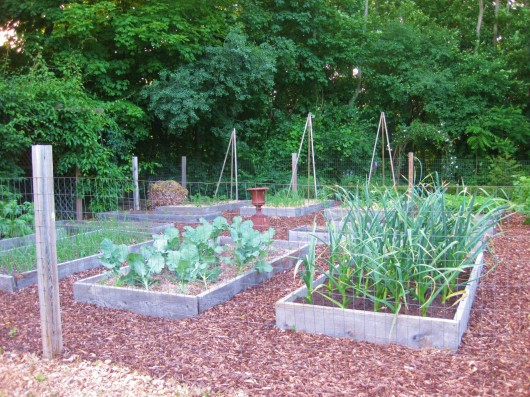 Here is the northern half of the  Kitchen Garden, in its early June stage. As you can see, I did not erect my usual  “Joan Crawford-Approved” tomato trellis this year. You see,  I don’t need a colossal amount of tomatoes, now that my partner has been informed by his doctor that he can no longer eat them. I recycled Ms. Crawford into three tripod-type structures, each of them approximately 7 feet tall. Two are for tomatoes; one is for cucumbers. 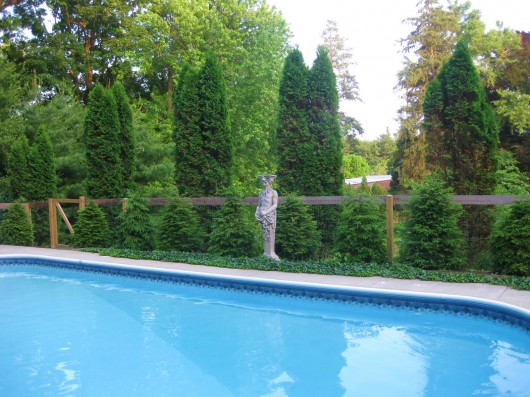 Opposite the vegetable patch is the Pool Garden, the outside framed with the tall arborvitae I showed you earlier, and the inside is edged with young Canadian hemlocks. The statue of a lecherous Satyr  watches over the pool. He seems to encourage skinny-dipping.  I’ll never tell. 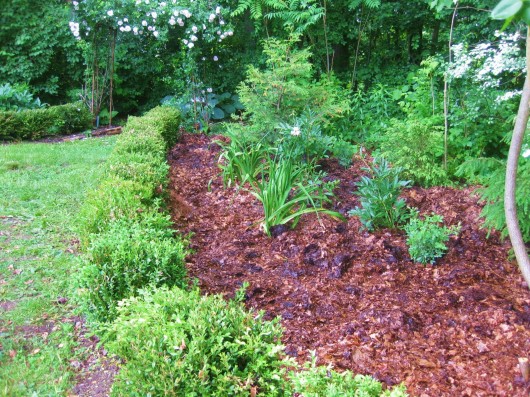 Just north of the Pool- and Kitchen Gardens, and forming an approach to the Woodland Garden,  are two curved, boxwood-framed perennial borders. I should probably have my head examined for making these, as I certainly don’t need more room for plants. Or maybe I do. In any event, the one above is the newest of the two. I recently mulched it with newspaper and shredded leaves. It is planted, for the time being, with  Baptisia, peonies, and day-lilies. 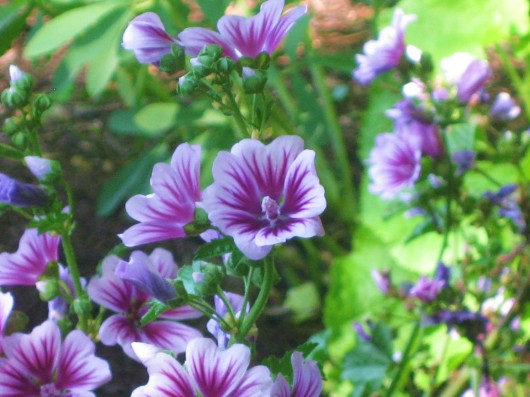 Its mate is planted with the same three perennials, as well as foxglove and hollyhock. Blooming now is the French hollyhock ‘Zebrina,’ its light pink flowers brushed with purple. It is a magnet for butterflies. 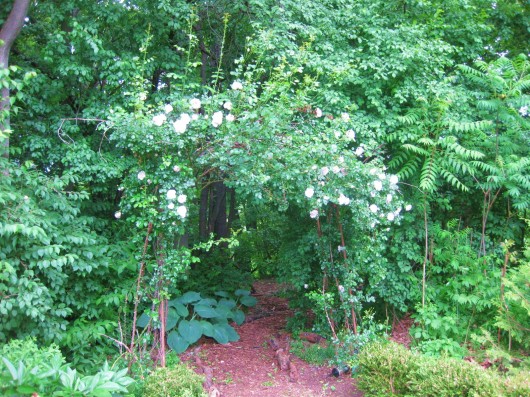 Between the two perennial borders, and beneath an arbor covered with Rosa ‘New Dawn,’ is the entrance to the Woodland Garden. Shall we step inside? 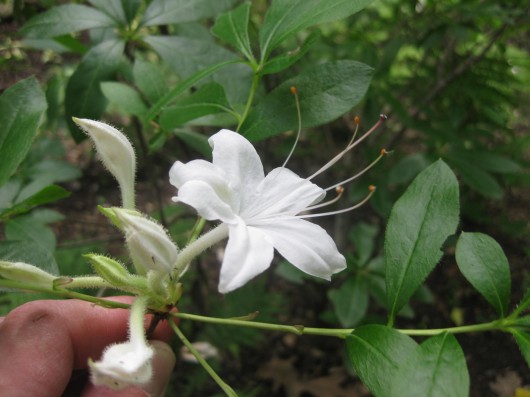 Here, a white azalea, whose name has been lost, is in full bloom. The flowers are intensely fragrant.  I gave a slip of this  plant to a lovely lady who attended the tour. I hope it roots for her.

If you’d like to see the curving paths, the fish pond, the ferns, hostas and sweet woodruff in the Woodland Garden, then by all means visit my post “From Wild Patch to Woodland.”

Meanwhile, let’s work our way back to the house, via the Serpentine Garden. 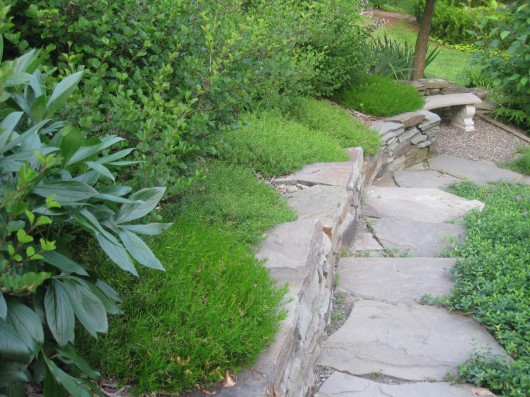 I designed the Serpentine Garden 5 years ago. In April and May it is washed in colorful bulbs and flowering shrubs. But now, in early June, it has retreated into a mostly-green thing, shaded by a Yoshino Cherry tree and various crabapples. How I built this enchanting garden on the steepest hill on the property. 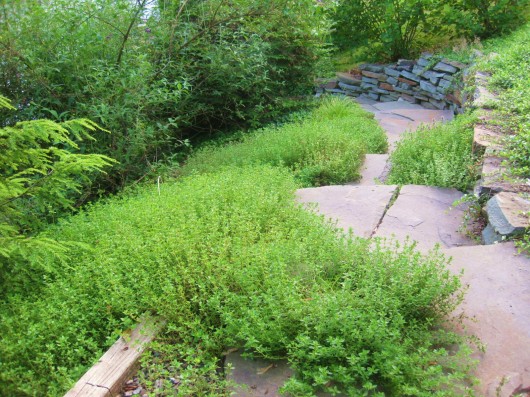 If you ever want a step-able groundcover that will keep weeds from growing in the cracks of your stone walkway, go with creeping thyme. I winter-sowed this herb one year, and it has flourished for me without any supplemental watering. It releases its legendary scent with every foot-fall. 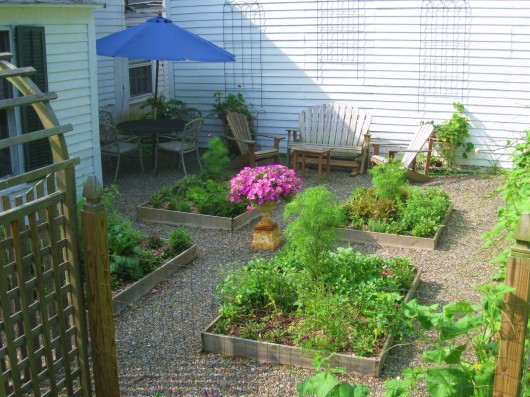 At the base of the Serpentine Garden is the Herb Garden. A detailed account of this small but productive place can be found in this post. Meanwhile, let me show you a certain herb which is currently growing there, and drawing great attention to itself. 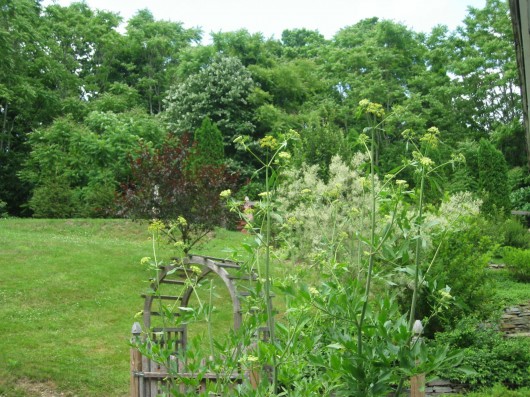 Say hello to my lovage plant, which, after 3 years, has become a towering skyscraper of not less than 7 feet. Dennis Rosenfeld, a reader who attended the tour here last Sunday, left with lots of lovage leaves — enough to make my Lettuce & Lovage Soup. (Dennis, did you make that soup — or did you use the leaves in some other delicious way?) 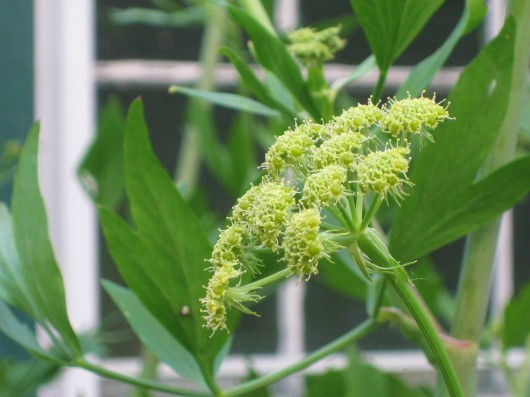 Lovage leaves taste like celery on steroids. They offer a hint of anise, too. I hope you’ll obtain this great plant! 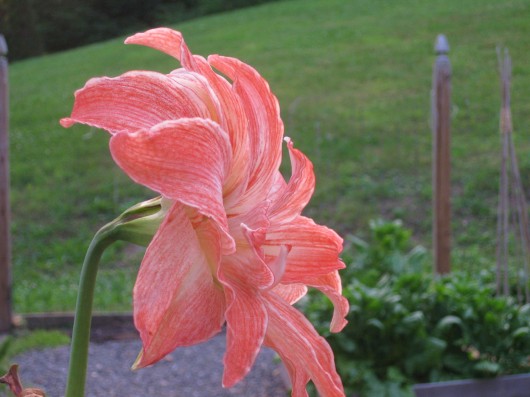 A number of my houseplants enjoy summer vacation in the Herb Garden. Above is a gloriously-colored amaryllis whose name has been lost. If you have amaryllis outdoors, be sure to feed it generously over summer. This way the bulb will produce embryo flowers for next year’s show.

Well, I hope you enjoyed this brief tour. And I hope you’ll come visit during one of my future “Open Days.” The dates are listed here.