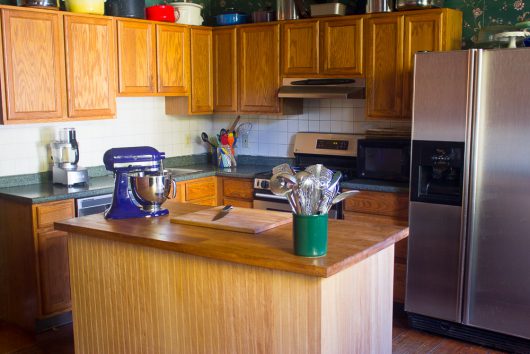 What would you do if you could re-do your kitchen? I only ask because my own kitchen is in need of help. For instance, I’d like to remove the dark green wallpaper, change-out the cabinetry, add a pair of wall ovens, and …well, I’d like to make the kitchen more attractive (and more functional, too) for my culinary videos. Here’s how I decided to start this Cinderella journey:

The journey began with a trip to Lowe’s Home Improvement Store.

For the sum of $91.00, Lowe’s agreed to send both a kitchen designer and a contractor to my home. Fortunately these two individuals were already familiar with the kitchen here, as they’d visited both this website and my YouTube channel. Here’s what we discussed:

Cabinetry. My kitchen’s oak-y cabinets look muddy on video. Furthermore, the upper bank of cabinets is proportionally “off.” The cabinets are too squat for the room’s 11 foot ceiling.

The solution. Lowe’s has lots of kitchen cabinet color options. I decided a sage-green finish might look well in this Victorian house. As for the too-squat-cabinet dilemma, the designer from Lowe’s suggested I use not one, but two banks of upper cabinets. The uppermost bank would require a step ladder to access, but it could hold the batterie de cuisine that I don’t use every day. 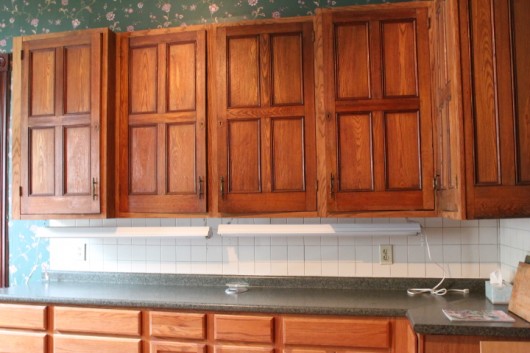 Fortunately the upper bank of cabinets on the kitchen’s east wall are suitably tall. I won’t replace them, as they are original to the house. 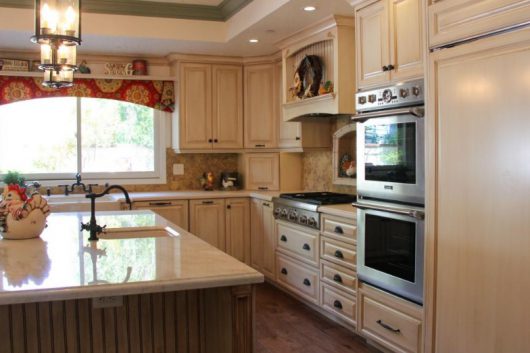 Double Wall Ovens. Oh, baby. I’ve wanted these since forever, but where to place them in my existing kitchen? Ah, that is the question!

The solution. Put the wall ovens where the refrigerator now stands! And the refrigerator? Move it to the east wall.  True, I’d have to relocate one of the 19th-century upper cabinets, and lose one section of the lower cabinet bank. On the other hand, I’d gain both counter and cabinet space between the new wall ovens and the existing range. The wall ovens require considerably less space than the fridge. 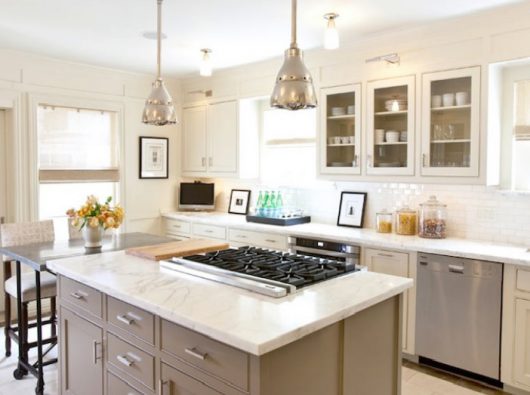 Built-In Burners for Work Station. For both live and filmed cooking demos, my free-standing work station could use a built-in cook-top. Unfortunately, such a device would render the station immobile.  For food photography, I like to move the station near the windows. For videos, I position the station between sink and range.

The solution. The Lowe’s designer suggested a 2-burner (either electric coil or induction) insert for my work station. The contractor had a great idea, too. He can run an electric cable from basement to kitchen floor, and provide extra slack for “wiggle room.” This way, I can have my built-in cook-top and maneuverability, too!

Next steps. Now that my kitchen has been assessed and measured, the designer will create a computer mock-up of the room. Then she and I will play around with different cabinets, counter tops, and wall ovens. Heck, with digital graphics, even the kitchen sink can be moved! Finally, we will look at the cost of all this work, and decide that what Kevin wants and what Kevin can afford afford are two entirely different things!

Now back to my original question: What would you do if you could re-do your kitchen? I’m all ears!