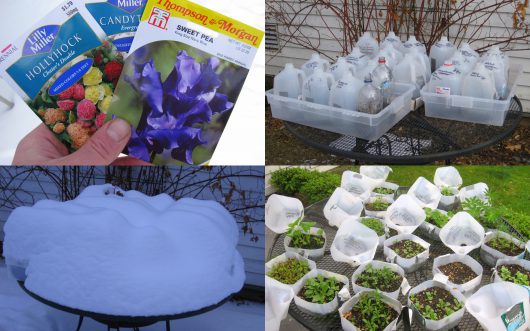 Happy anniversary to me! Today marks the ninth year that I’m winter-sowing my summer garden. When you winter-sow, you plant seeds in miniature “greenhouses” made from recycled milk or water jugs. Then you bravely place the jugs outside (yes, outside!), where they are exposed to snow, sleet, and freezing temperatures. When spring arrives, the seeds germinate and grow into strong, healthy, naturally-hardened-off seedlings that are ready for planting in the open garden. Here’s a winter-sowing refresher course for you:

New to this nifty method of seed-starting? You’ll find the basics in Winter-Sowing 101

Not sure how to turn a common milk or water jug into a miniature greenhouse? Read Making a Greenhouse and Sowing Seeds

Have questions about what to winter-sow, and when to plant the seeds? Read the aptly-titled What to Winter Sow — And When

Are you a long-time winter-sower, too? Then by all means weigh in on the method in the comments field below. New gardeners will appreciate your thoughts!