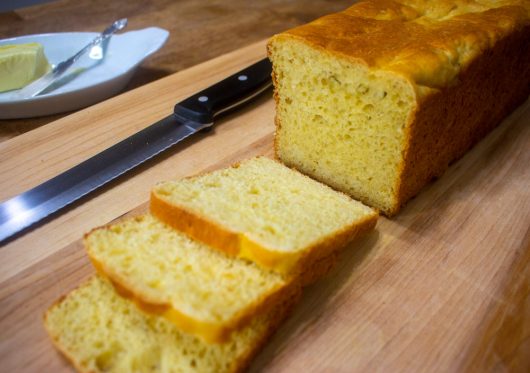 Sally Lunn is an 18th century bread made from flour, yeast, milk, and eggs. I love it for toast, French toast, and for simply topping with good butter and homemade strawberry jam. It’s certainly an easy bread to make. The only special equipment you’ll need is a stout spoon! My video and printable recipe for this luxurious loaf:

Click the “play” arrow to watch the video. And please forgive the occasional critiquing from Tiger the Cat. She’s the most judgmental feline you will ever encounter. 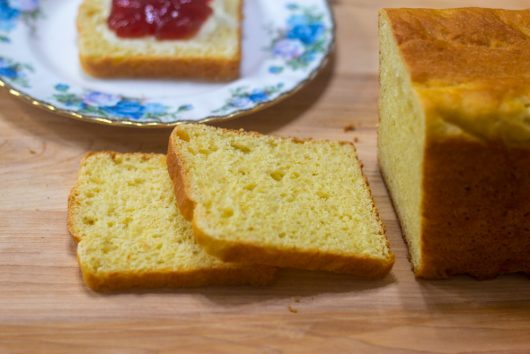 There is little historical evidence for Sally Lunn as a person. The Gentleman’s Magazine of 1798 uses Sally Lunn as an example during a discussion of foods named after people—”a certain sort of hot rolls, now, or not long ago, in vogue at Bath, were gratefully and emphatically styled ‘Sally Lunns'”.[8] But it is not until 1827 that a historical person is described by a correspondent of William Hone using the pseudonym “Jehoiada“, who says she had sold the buns on the street “about thirty years ago”.[9] A baker called Dalmer had bought out her business and made it highly successful after he composed a special song for the vendors,[9] who sold the buns from mobile ovens. The earliest evidence of commercial production is an 1819 advertisement for the Sally Lunn “cakes” sold by W. Needes of Bath, bread and biscuit maker to the Prince Regent.

And there you have it. Nobody seems to know why the bread is called “Sally Lunn!”

History Update: I found this comment from reader Lucinda Russell to be most informative:

Hi Kevin,
Thanks for the lovely recipe and the not-inaccurate story of Sally Lunn. As you say, “she” was not a real person. My degrees are in history, and I put them to good use working in various museums and historic sites, including those of the US National Park Service. I conducted classes in historic cookery, and researched the origins of Sally Lunn.
Before it reached the city of Bath, England, it was a French bun, known as “Soleil et Lune,” the sun and the moon”. The sun was the golden outside, and the moon was the pale inside. When the lovely bread crossed the Channel, arriving in Bath first, girls were hired to hawk it in the streets, calling out, “Soleil et Lune”. Neither they, nor their clientele knew the French, and thought they were saying “Sally Lunn”. Undoubtedly, this is what the girls were actually saying. And so the legends of a girl named Sally Lunn grew. Nowadays, even respectable cookbooks with excellent recipes for the treat tell “her story”. I have made it many times, and folks are impressed. 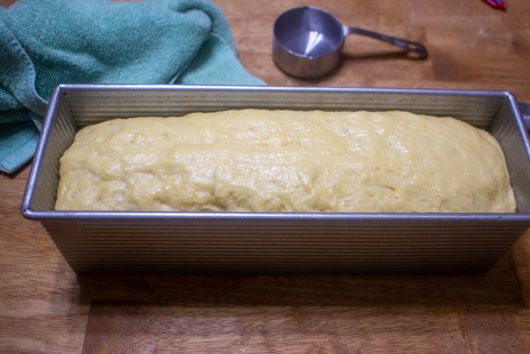 You can bake this Sally Lunn in a common 9×5-inch bread pan. I used a 13-inch pain de mie (i.e., “Pullman”) pan, simply because I wanted to create a perfectly rectangular loaf. Another option is to divide the batter between two 8×4-inch pans. 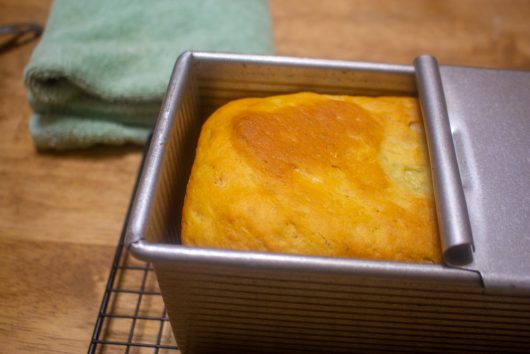 The pain de mie pan is an old-fashioned French bread pan that comes with a lid. The lid stops the bread dough from forming a crown as it rises in the oven. If you own such a pan, you might like to try my recipe for French Sandwich Bread. Click here to view it.

Whatever bread pan you use, I hope you’ll bake yourself a loaf of Sally Lunn. And if you do, I hope you’ll let me know how the bread worked out for you! xKevin

And here’s the printable recipe: 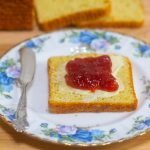 Szechuan Chicken Sheet Pan Dinner
A Leak and a Chimney