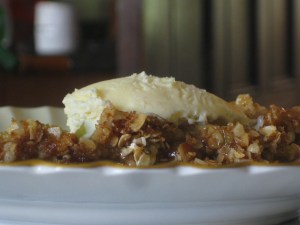 YESTERDAY WAS MY FRIEND EWARD’S BIRTHDAY. Because Ed is a foodie, I figured the best gift I could him would be a dinner party featuring some of my favorite recent recipes from A Garden for the House. So last night, guests at the party dove into homemade hummus and ricotta, served with this terrific bread. Next, I brought out a platter of lip-smacking good Duck Breasts Mirepoix. And for the finale, I took advantage of the rhubarb in my garden and made this ridiculously simple, perfectly delicious Rhubarb Crisp:

If you have rhubarb in your garden, or if you can obtain it from the farmers market, you’ll have to try this exquisite crisp. After one bite, my guests and I began to chant “Not too tart! Not too sweet!” Well, we’d been drinking. 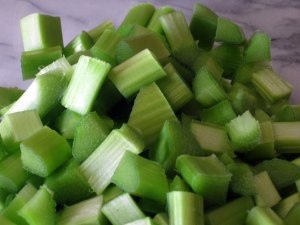 Rhubarb Crisp
Ingredients for about 6 servings

The filling — In a medium bowl, whisk together sugar, cornstach and cinnamon. Add the diced rhubarb, and quickly toss to coat each piece. Pour into an 8×8″ square or round non-stick pan.

The topping — In another bowl, use a fork to blend to oats, cinnamon and brown sugar with the butter; pour over the rhubarb mixture.