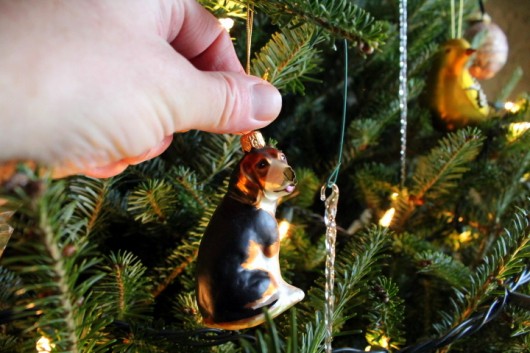 Would you like to see some of the baubles — and yes, beagles — that ornament the boughs of my Christmas tree each year? Here they are, along with a few thoughts on treating, lighting, and decorating this evergreen symbol of the holidays: 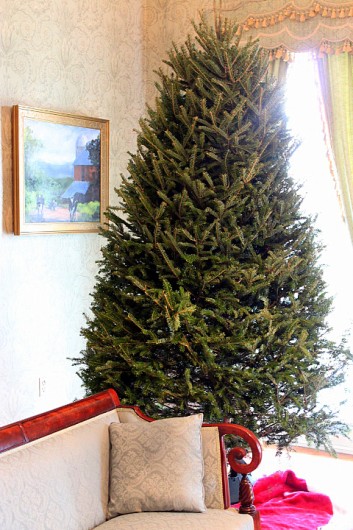 I’m partial to Frasier firs. Why? Because most have a full, Christmas tree-ish shape. Furthermore,  their boughs are strong enough to hold even heavy ornaments. Pictured above is the 9-foot Frasier in my parlor.

Treating a tree. To keep a tree fresh through the holidays, be sure to saw off at least one inch of the tree’s base (usually the seller will do this for you). Then set the tree in a stand with a good-sized basin, and fill the basin with water. As evaporation occurs — and this will be daily — add more water. Turn off nearby radiators, too. A pine tree can’t be expected to hold onto its needles in a room that is hot and dry. 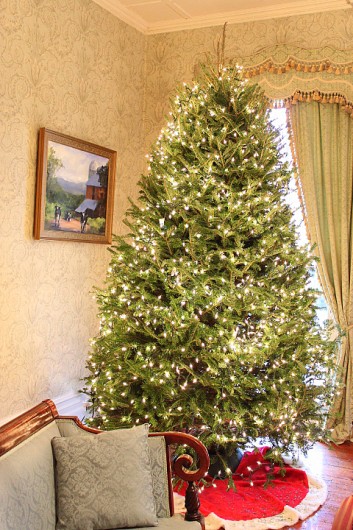 Lighting. Never skimp on lights. If possible, arrange strands of mini-lights both both vertically and horizontally on the tree.  This strategy produces magnificent illumination. 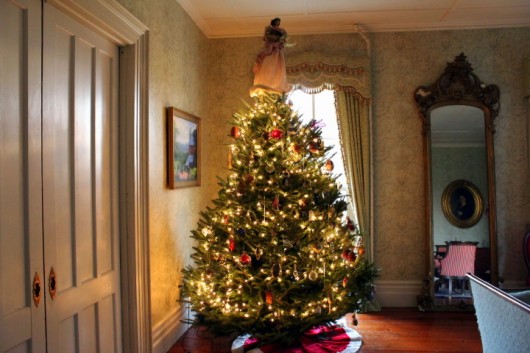 Decorating: I’ll admit that a tree dressed in all-blue, all-gold, or all-silver balls can look elegant. But only if that tree is located in a department store. At home, decoration should be a personal statement that follows no set of rules.  Use whatever ornaments you’ve collected over the years, including those you or your children were forced to make in elementary school.

I made such a bauble as a first-grader in the 1960s. It was a little snowman. He was crafted from marshmallows, with green sequins for eyes and a cone-shaped hat made from red construction paper. My mother kept this relic until 2006, and then foolishly sent it to me. I say “foolishly” because the little snowman crashed to the floor last December, where it was quickly discovered — and eaten — by Lily the Beagle.

Ah, 40 years of history. Gone in a single gulp.

And here are just some of the trinkets on this year’s tree: 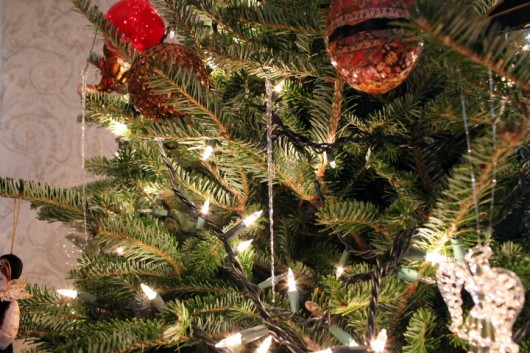 Do you love glass ornaments, too? I think they provide terrific sparkle. I picked up the thin, delicate icicles pictured above from a shop in New York’s East Village back in 1998. 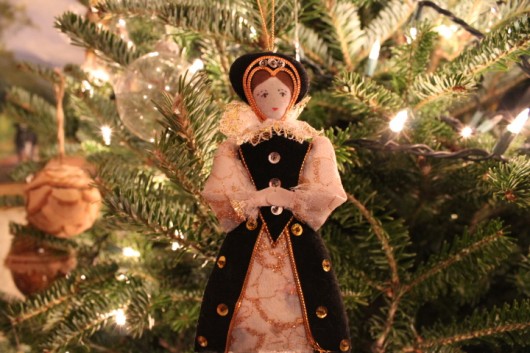 My partner and I picked up Catherine of Aragon, above, while visiting London. Catherine was the first wife of Henry VIII. Lucky for Catherine, her marriage merely ended in divorce. 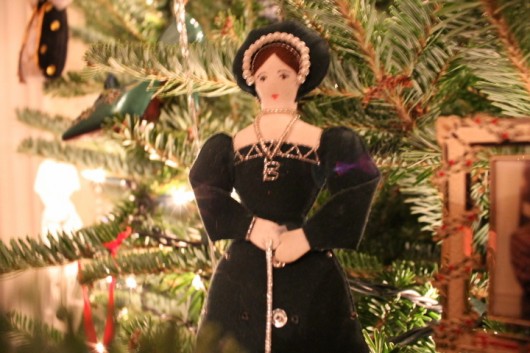 Anne Boleyn, Henry’s second wife, wasn’t so lucky. Henry’s only escape from this marriage was to  have Anne beheaded.

Are you feeling the holiday spirit yet? 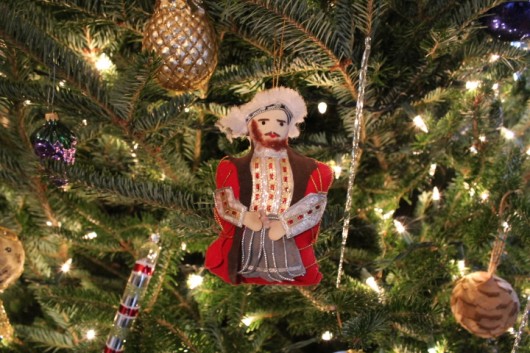 And here’s loveable Henry himself. I hope you’re not attracted to his type.

And now I feel a song by Herman’s Hermits coming on. 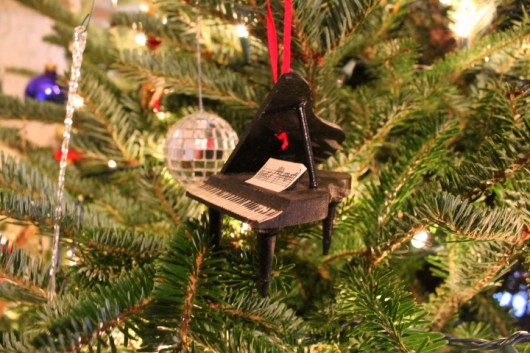 There are lots of grand pianos on the tree, like this one… 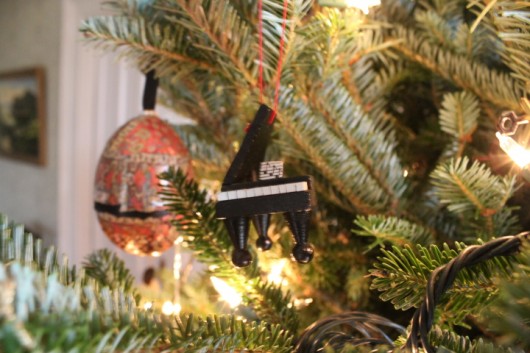 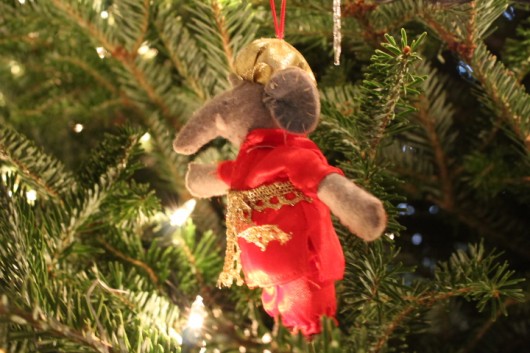 And here’s Babar the Elephant. We found him at a little shop in Paris.

It’s worth traveling to Paris just to obtain Christmas souvenirs. 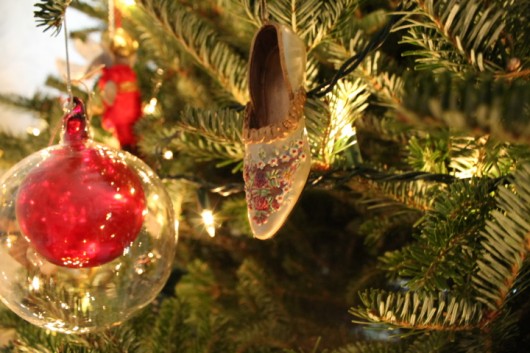 I don’t remember where this shoe came from. It is too big for Anne Boleyn, and too small for Babar. 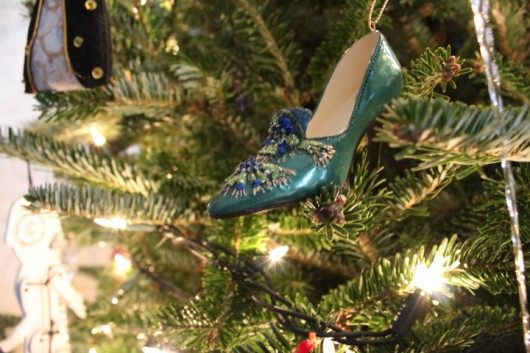 Ditto for this shoe.

Obviously, someone around here has a foot-fetish. 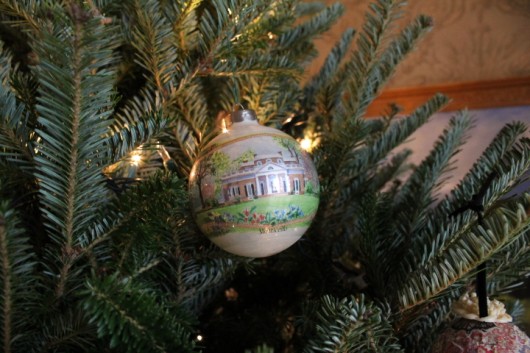 We brought this ornament back from Monticello, Thomas Jefferson’s home. 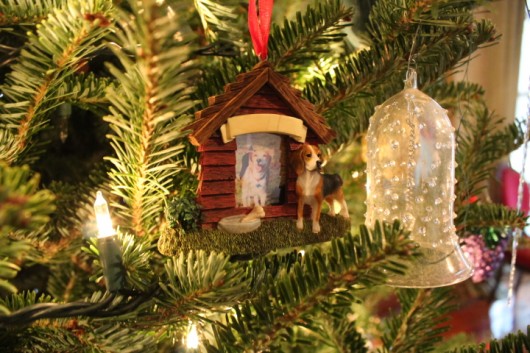 After we adopted Lily (you can read her story here), friends sent us Beagle ornaments. The one above features an actual photo of Lily in a doghouse frame. 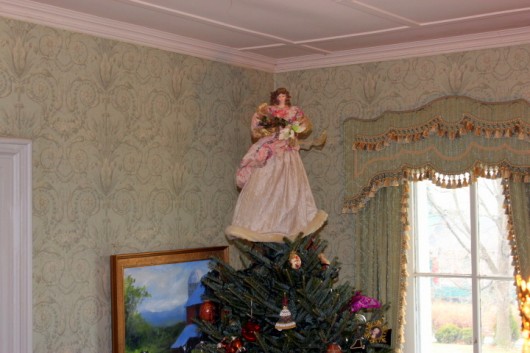 It may seem odd to you that you that we placed an 18-inch tall doll atop the tree. But she wasn’t always a doll. Originally she was an angel. An angel with magnificent, feathered wings. Then Lily the Beagle discovered the angel in a box in the laundry room.  As you can imagine, the angel’s wings went the same way as my marshmallow snowman. 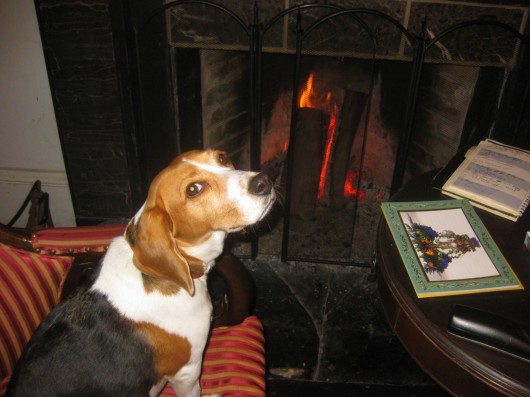 Yes, Lily, I’m talking about you. 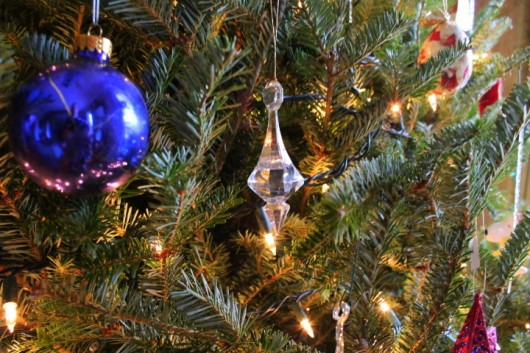 I’ll show you more holiday decorations as I set them up. Meanwhile, how are  your own decorations coming along?