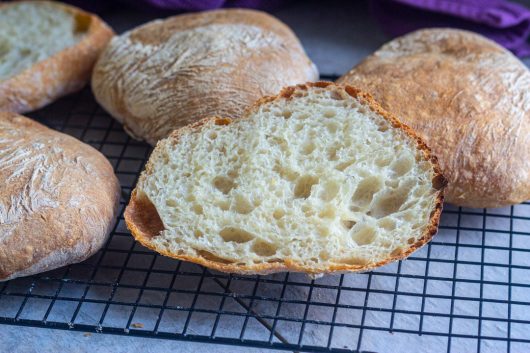 If you only know the sad, commercially-produced Ciabatta that supermarkets sell, then I have wonderful news for you. Homemade Ciabatta is the real deal, as evidenced by its crackling-crisp crust, its yeasty perfume, and its soft, “open” crumb. You can make this bit of heaven entirely by hand, just as I do. Here’s how:

Before you proceed to the printable recipe, please watch the video above. I want you to get a “feel” for making Ciabatta, from mixing the “Biga” to kneading, forming, and baking the dough. A video is worth a million words, my friends.

Ciabatta is a white bread made from wheat flour, water, yeast, and salt. The bread is known for the myriad air holes (properly called “alveoli”)  in its interior. The dough from which the bread is made is much wetter than traditional Italian bread or French baguettes. It is a high-hydration dough.

According to Wikipedia, “Ciabatta bread was first produced in 1982 by Arnaldo Cavallari, who called the bread ciabatta polesana after Polesine, the area he lived in. The recipe was subsequently licensed by Cavallari’s company, Molini Adriesi, to bakers in 11 countries by 1999.” Cavallari and other bakers in Italy were concerned about the popularity of sandwiches made from baguettes imported from France, which were endangering their businesses, and so set about trying to create an Italian alternative with which to make sandwiches. 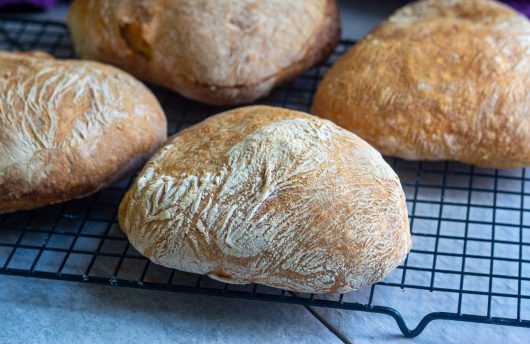 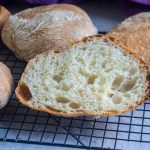 For the final dough:

The third and final fold: