WHEN I RECENTLY DISCOVERED the vintage menus for sale at Cool Culinaria, I realized I’d have to purchase one, frame it appropriately, and then display it in my dining room. I settled on the menu above —  Thanksgiving Dinner  at the Windsor Hotel in St. Paul, Minnesota,  1883.  Of course, I purchased a menu for one of you, too. And there are nearly 50 menus for you to choose from. Who’d like a chance to win one of these unique historical documents in a random drawing? 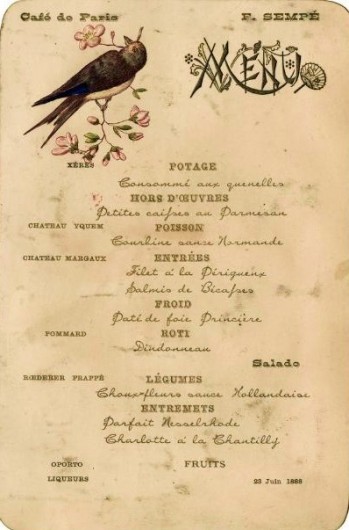 Cool Culinaria is the brain-child of Charles Baum and Barbara McMahon. Charles is an artist, a photographer, and a former restaurateur. He is passionate about all things beverage- and culinary-related, just as I am. Barbara is a “menu maniac” who has been unearthing historical menus that date back to the 19th century.

Here are just some of the menus that Charles and Barbara have collected and digitally reproduced as fine,  13- x 19-inch prints on 130lb paper. Each print is accompanied by an equally-fine, 11- x 17-inch copy of the interior menu. Descriptions below are quoted  from Cool Culinaria’s website: 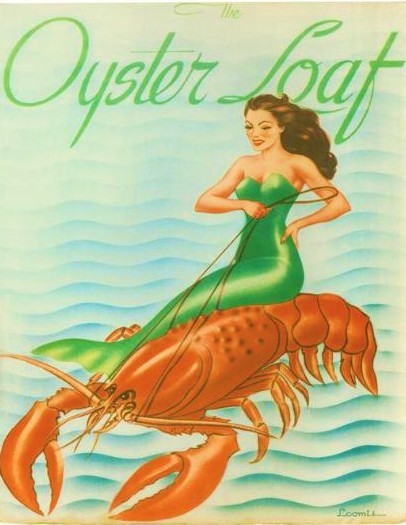 The Oyster Loaf – San Francisco, 1940s. The oyster loaf — a thick chunk of crusty bread hollowed out and stuffed with fried oysters — is an important part of San Francisco’s dining history. The story goes that in the early years of the city’s history, judges, senators and aristocrats would drink cocktails and then buy an oyster loaf as a peace offering before heading to Nob Hill and home. This menu cover was created by the celebrated illustrator, author and art instructor Andrew Loomis, and shows a voluptious, brunette mermaid riding a lobster side-saddle.

Pullman Buffet Menu & Wine List – 1900s. This beautiful menu cover harks back to the days of luxury train travel across the United States. After spending an uncomfortable night sleeping upright during a train journey, George Pullman was convinced passengers would pay for better amenities and he established his company in Chicago in 1867. Passengers could rest in sleeping cars and eat in dining cars decorated with chandeliers and leather seating as trains sped from city to city. Freshly prepared meals were served by uniformed waiters. (Kevin’s note:  Are you listening, Amtrak?) 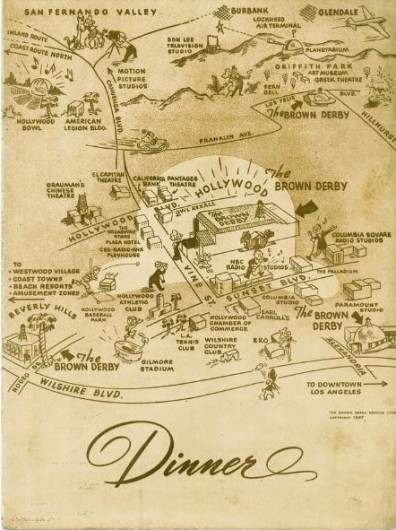 The Brown Derby, Hollywood 1948.  The Brown Derby, located at 1648 North Vine Street, was the second Brown Derby to open but quickly became the most famous and THE place to see and be seen due to its proximity to the major film studios. It opened on Valentine’s Day in 1929. The restaurant was the preferred hang-out for gossip columnists (they and the movie executives loved the innovation of table-side phones).  (Kevin’s note: Anyone remember the famous scene from “I Love Lucy” where star-struck Lucy Ricardo encountered William Holden at The Brown Derby?) 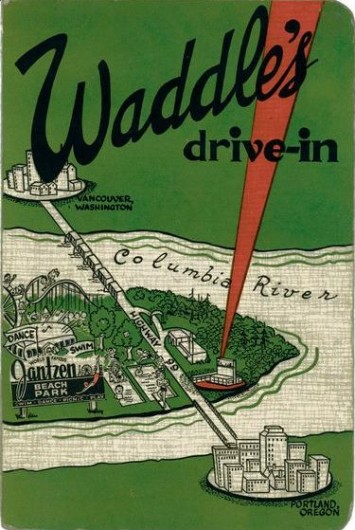 Now, you don’t have to choose one of the menus pictured above. Stop by Cool Culinaria’s website, and select a menu from their fine prints category. I can tell you that each menu is a work of art, as well as a glimpse into the eating habits of people during the late 19th and first half of the 20th centuries. (Above, Waddle’s Drive-In, Portland, Oregon 1949.)

For a chance to win one of Cool Culinaria’s extremely cool menus (un-framed),  do these 2 simple things:

1. Subscribe (if you haven’t already) to my weekly email newsletter.

Enter soon! This random drawing expires on Wednesday, September 12, 2012, at 11:59PM EST.  As always, I’ll use the nifty number gadget at Random (dot) org to select a winner. The winner will be notified by email.

Oh – just to be clear, the winner will be able to choose ANY menu from Cool Culinaria’s fine prints. You can see all of the menus here.