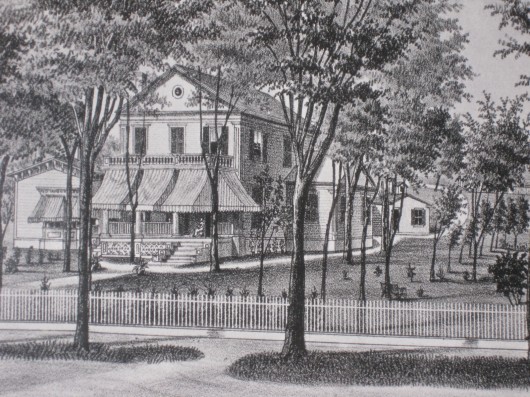 DID I MENTION that we are only the fifth owners of this old house? It stayed in the same family from 1826 until 1975. And in 1975, new owners gutted the original kitchen wing — which included a dairy pantry and a butler’s pantry — I still cry about this — and turned it into rental apartments. Then they assaulted  the  formal, Greek-Revival dining room by turning it into an eat-in kitchen. I’ll show you what we did with the rental apartments in a future tour. Meanwhile, here’s a glimpse of the dining room, restored to its intended purpose:

Restoration involved the removal of kitchen cabinetry, appliances (none, unfortunately, worth keeping), and a big wood-burning stove, which you’ll hear more about later. Then the holes in the floor, drilled there to accommodate plumbing, were filled. Did you know that the round pieces of wood used to fill such holes are called — according our contractor — “Dutch Boys?” Me neither. 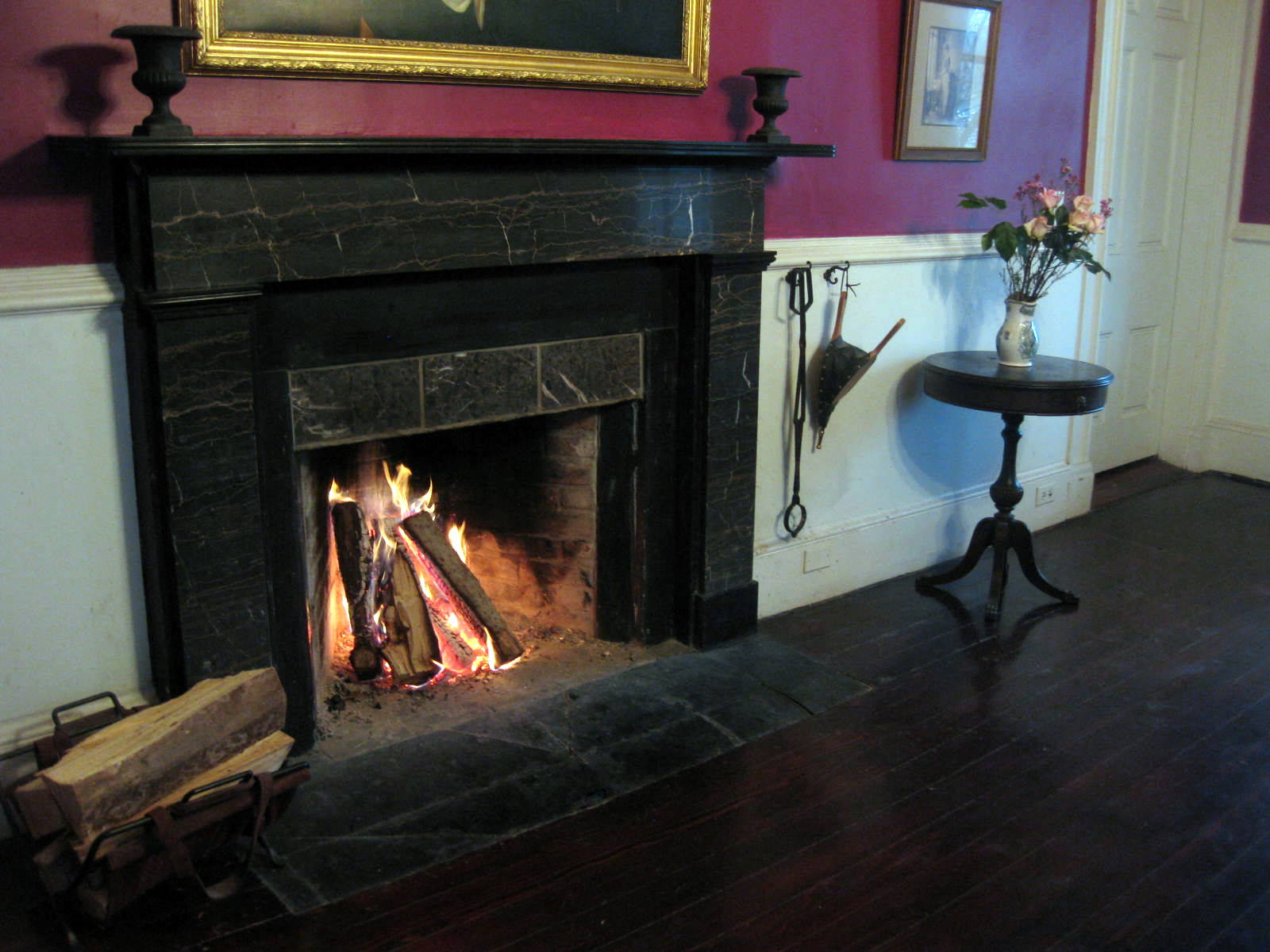 Added to the house in 1835, the dining room featured the black-marble fireplace you see pictured above. Unfortunately this had been bricked up for 27 years. Why? Because the same “Let’s remodel!”  family had placed a wood stove in front of it.  And two subsequent owners left it there. The stove featured  a huge exhaust pipe, or flue, which grew up above the mantel, and then exited through the wall where a painting now hangs. I have nothing against wood stoves, but in this location it was an eye-sore.

Restoring the fireplace to working condition was not easy.  The contractor said “No how. No Way.”  I ignored him. A  fireplace functioned there in 1835, and, hell and damnation, it was going to function there once again. I asked him to remove the offending bricks. And he did. With a sledgehammer.

Can you guess what happened next?

A blinding black avalanche completely engulfed the room, as out poured 167 years-worth of soot, dust, and assorted bird nests. What a mess.

But I got my fireplace. 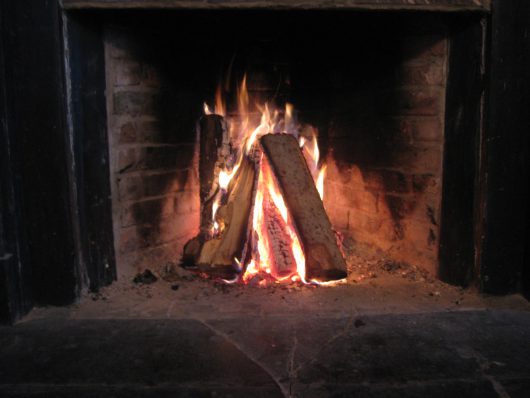 And what a fireplace it is! The angled sides and shallow depth of the firebox (it is a Rumford design) produce all the radiant heat needed to warm the room quickly and efficiently. 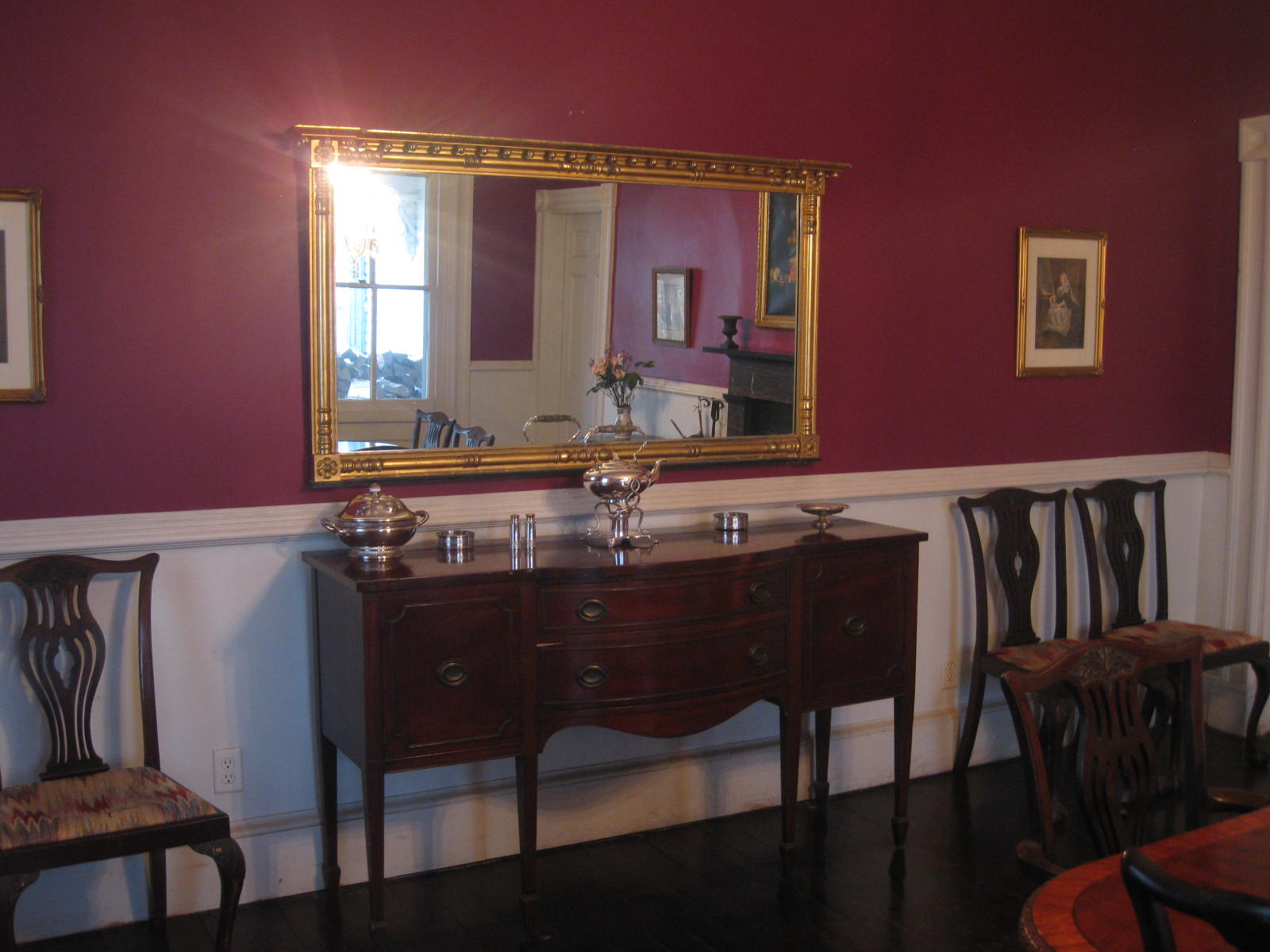 I used a plum-colored paint for the walls above the chair-rail. Because the color seemed to demand some “bling,”  I suspended, above the sideboard,  a gilded  mirror. The mirror is a Federal-era piece. 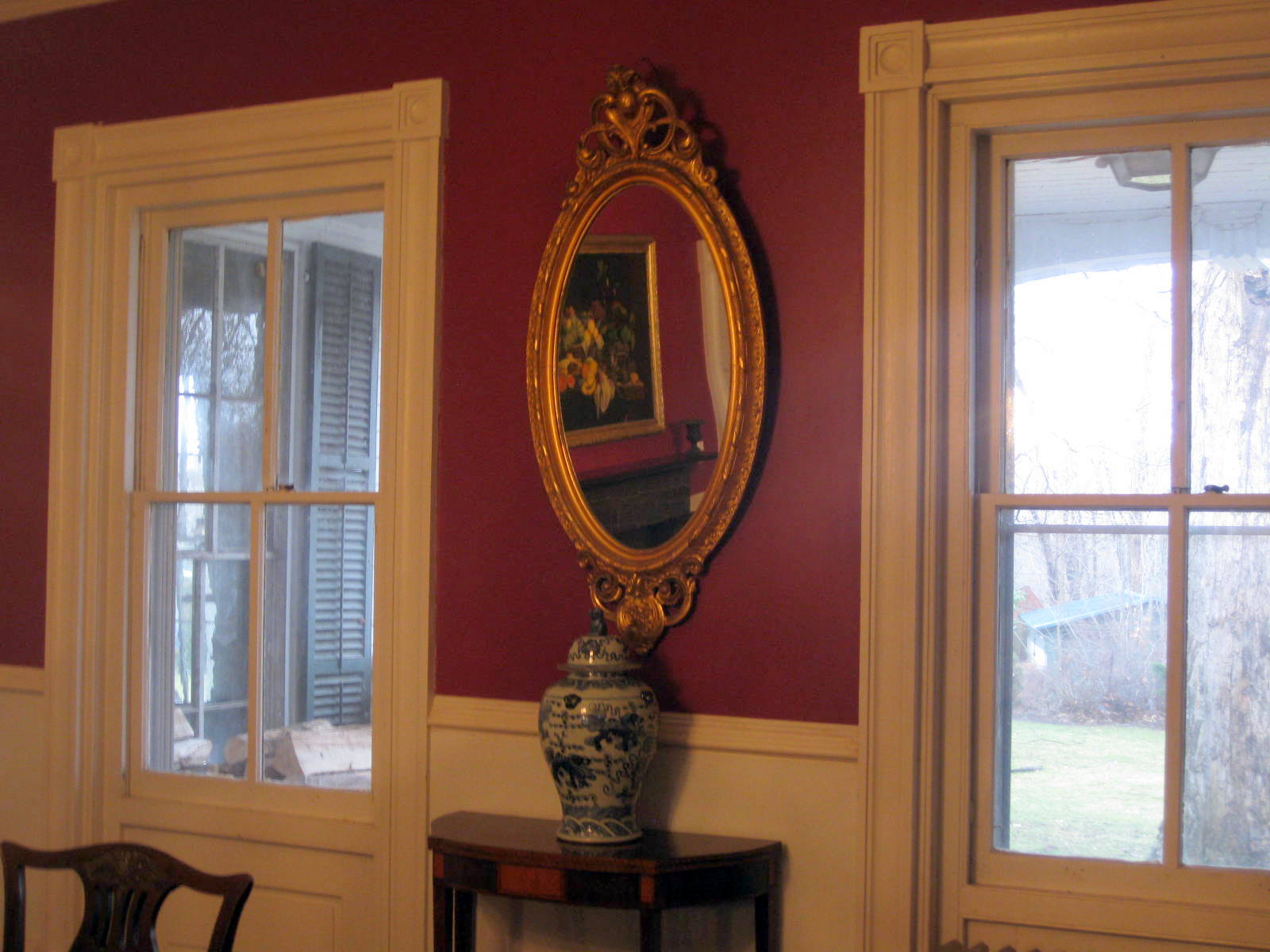 At the other end of the room, between two windows, is another gilded 19th century mirror. On the games table (one of two we purchased from Dominic Dunne’s estate), is a Victorian-era ginger jar. 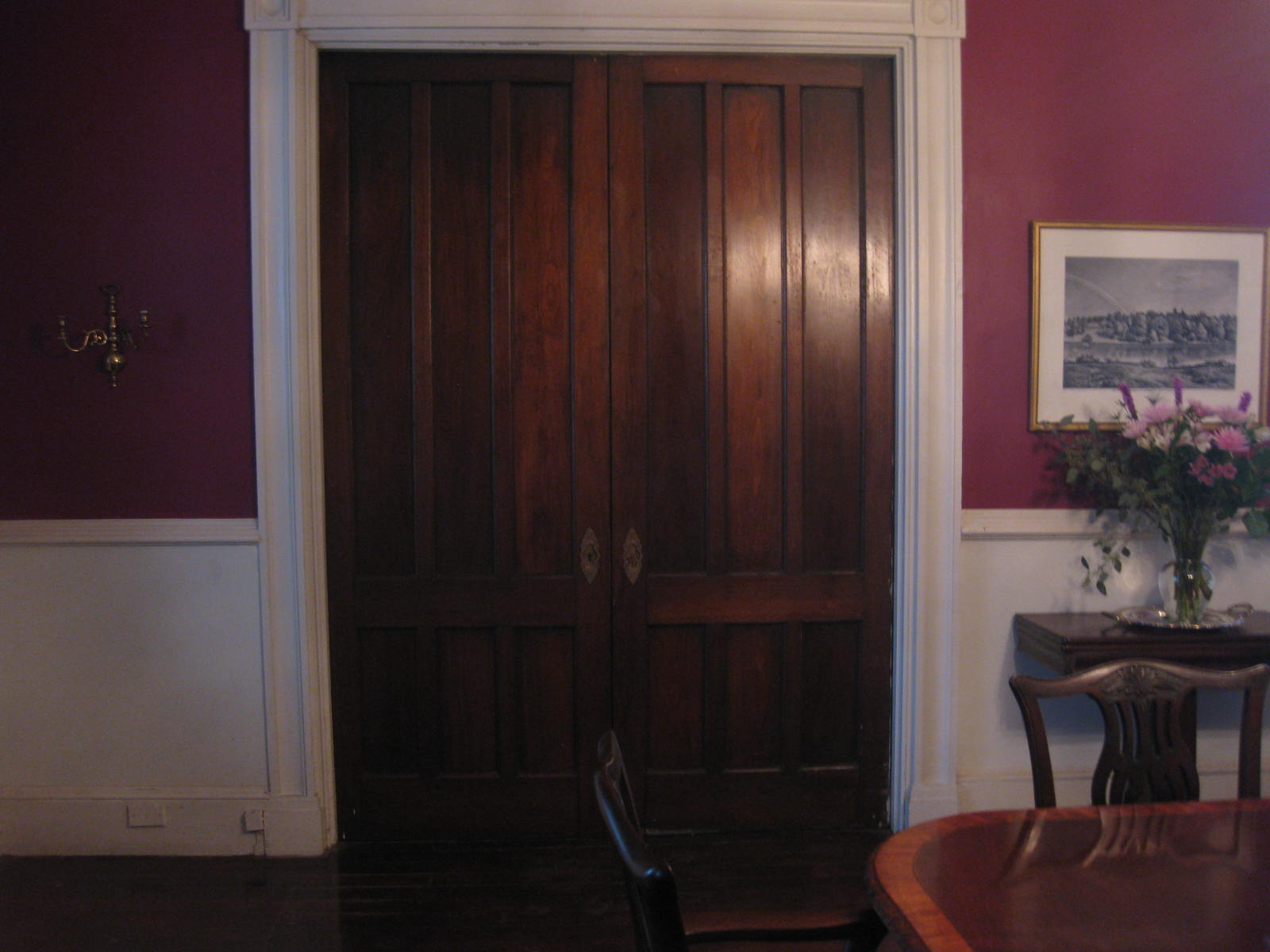 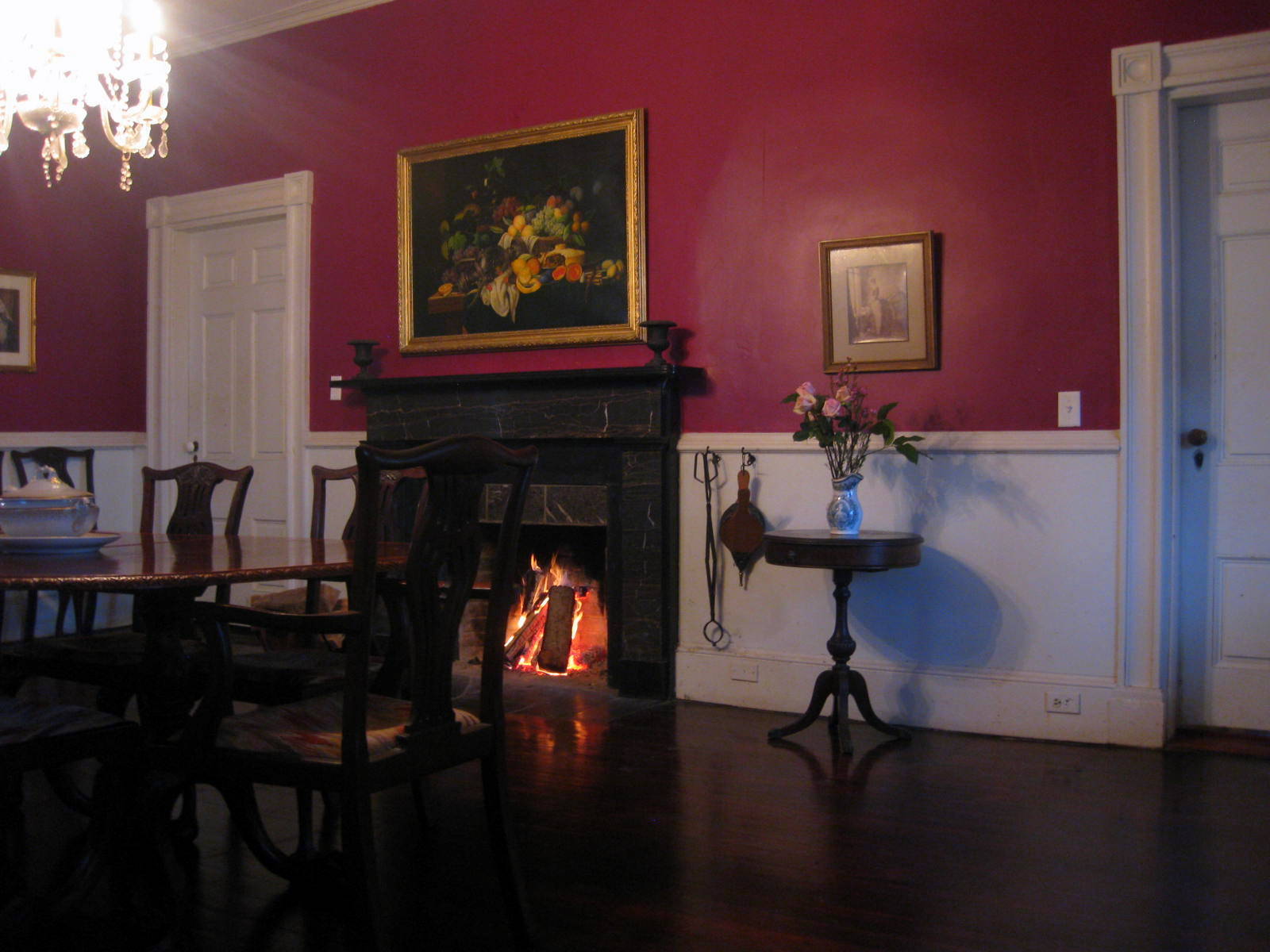 while on the east wall, the door on the right leads to the entrance hall, and the one on the left heads into a pantry.  The dining room, like every room in this house, is completely private. Privacy was essential in the days when people relied on fireplaces  for warmth. 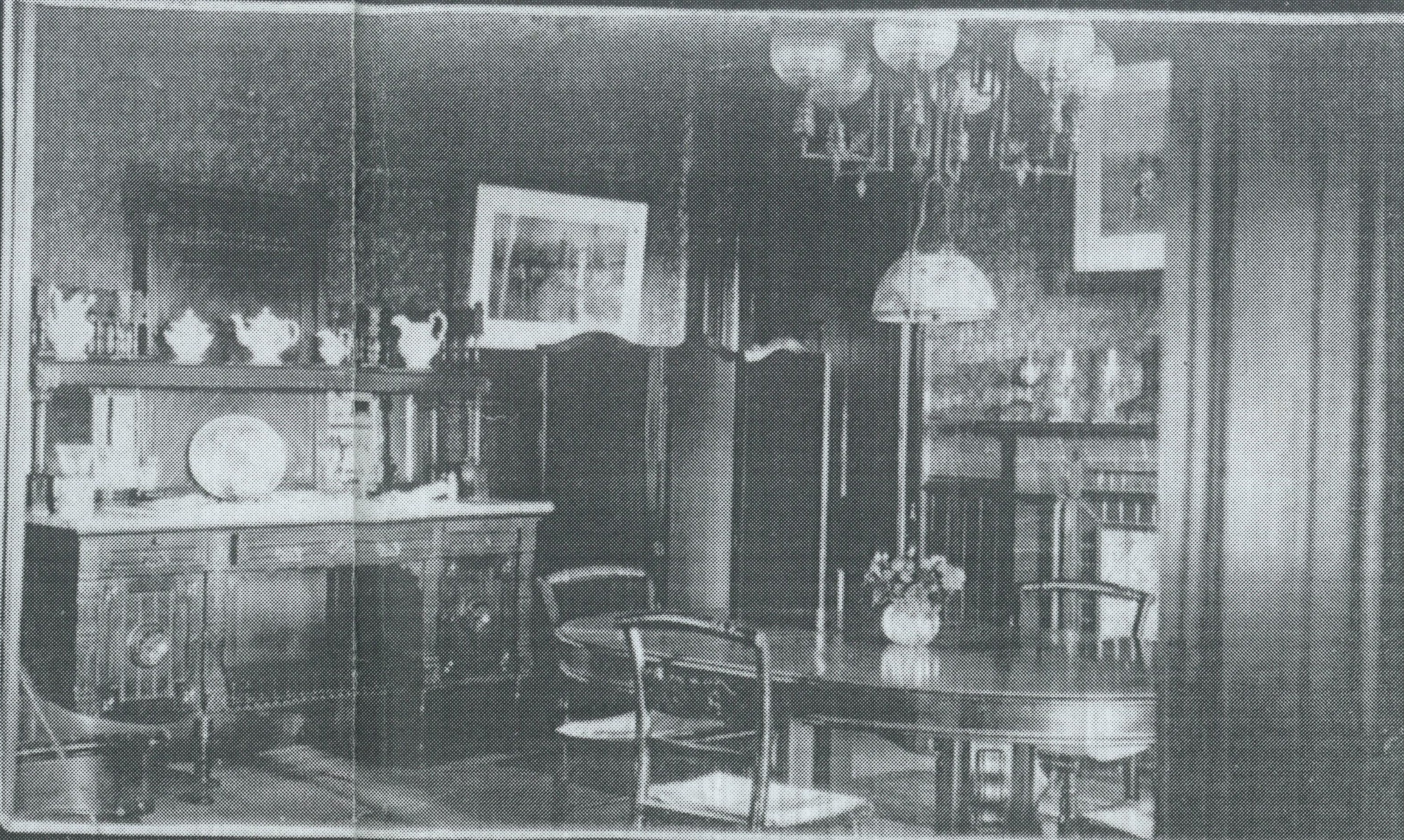 Here is the room as it appeared around 1890. A descendant of the original owner sent me this picture, or rather a xerox-copy of the picture, and hence the poor quality of the shot. As you can see, the room was furnished at that time with a late-Victorian sideboard.  I chose to give the room an even earlier, more “Federal”  look.

In closing, I’d like to say that when we first saw this dining room — as a run-down kitchen — it seemed to cry out “Look what they’ve done to me!”  I hope it is happy with our restoration. We certainly love the room.