DO YOU HAVE A SEVERE SLOPE ON YOUR PROPERTY? That is, a hill so steep that it can’t be mowed, let alone gardened? I had to address this problem, too, in my own yard. And that’s how “The Serpentine Garden” was born. Here’s the back-story:

One summer, our former lawn-person – let’s call him “Kamikazi Keith” – toppled his tractor on my property’s steepest slope not once, not twice, but three times. Although Keith was never injured, I realized that such an incline would have to be corrected. A winding path, it seemed, would be the best cure; this would also provide easy access to the kitchen-, woodland-, and pool-gardens, which are located at the top of the hill. 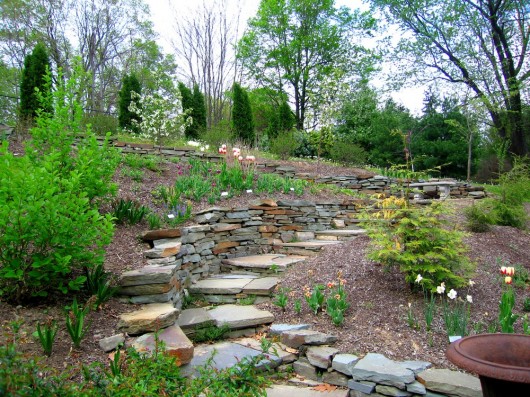 The Serpentine Garden was carved into the hill the old-fashioned way: entirely by hand. The only tools used were a pick-axe, a shovel, a leveling device, and one very strong man, who completed the job in about six weekends. The picture above is from May, 2009, when the garden was still very young.

As you can see, the path has an extremely gentle contour, each rise no higher than five inches, so that garden-lovers of all ages can climb it with ease. I designed a seating area at its midway point, beneath a Yoshino cherry tree, where one can stop, rest, and enjoy the view before continuing the winding ascent. 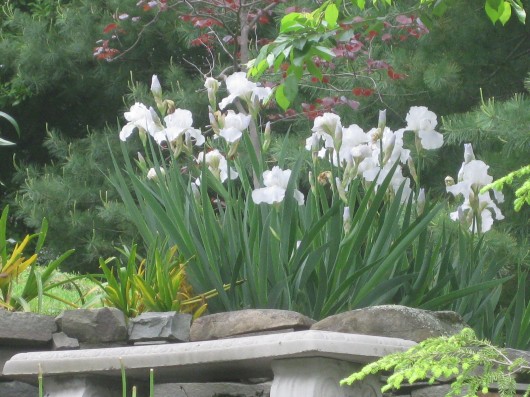 Planted in the bed behind the bench, and beneath the cherry tree, is a group of white Iris ‘Immortality.’ Its intoxicating scent is enjoyed not only in April, but in October, too, for it is a twice-blooming iris. 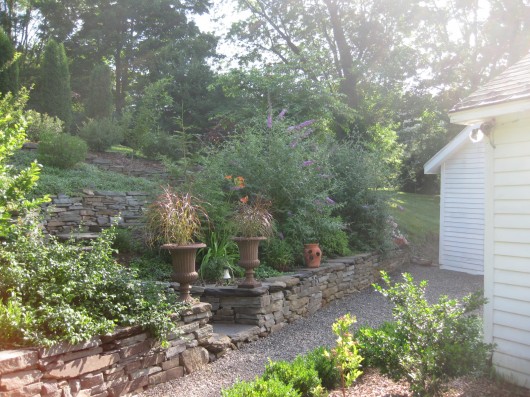 The garden is composed of three terraces. I planted the first terrace with tall shrubs, including Buddleja, Hamamelis (“Witch Hazel”) and hemlocks, in order to obscure the view, and also to make the garden seem more mysterious. The shrubs are underplanted with ivy and vinca minor. 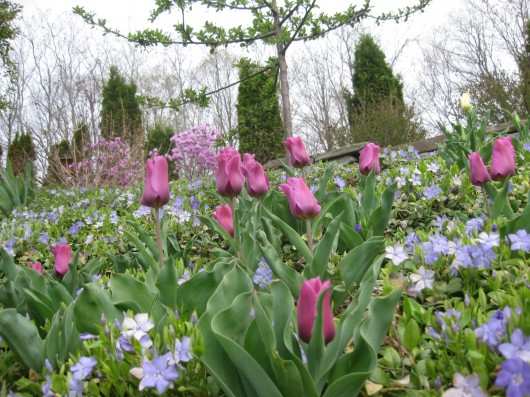 But it is the second terrace that steals the show in early spring. This is when a group of Tulipa ‘Van der Neer,’  underplanted with vinca minor, makes a stunning portrait in purple and blue. 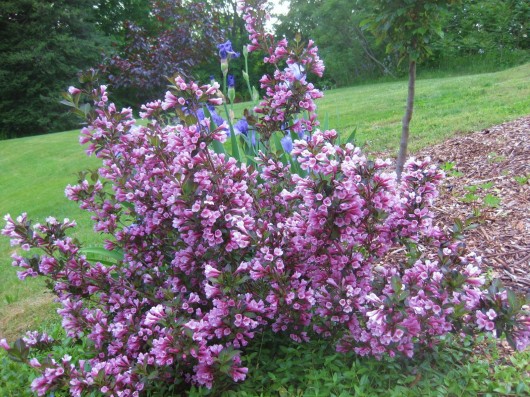 After the tulips retreat, Weigela ‘Wine & Roses’ opens its purple trumpets, with blue iris in the background.  If you look carefully, you’ll notice some little specks of green behind the iris. 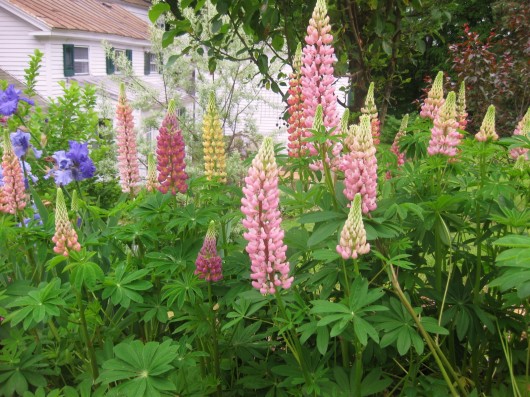 Those little specks, in late May, become an eye-popping patch of Russell Hybrid lupines. How I winter-sow and grow these stately spires. 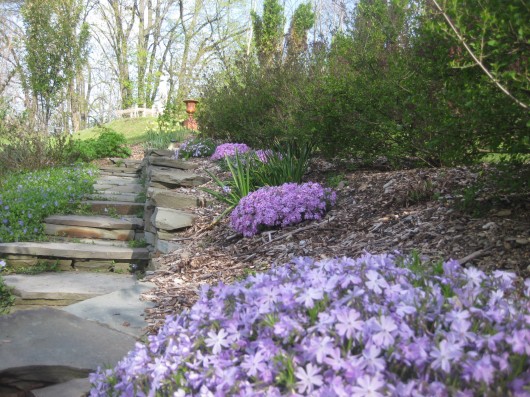 In the third and final terrace, the season begins with blue and pink Phlox subulata. These are planted in front of a hedge of dwarf lilacs. The phlox, I hope, will eventually cascade over the retaining wall. Puddling plants offer the same luxury as puddling window hangings. 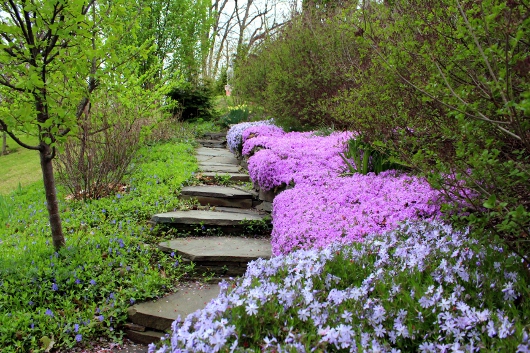 Another Update: Same phlox, in May, 2014: This is what voluptuousness looks like! 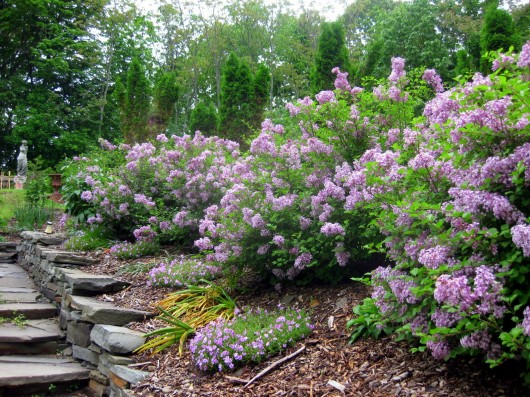 I wish you could visit me when the hedge of dwarf Syringa ‘Miss Kim’ comes into bloom, which is several weeks after the more common syringas on the property have finished their scented show. In June I like to spend the early evening hours sitting on the bench I mentioned earlier, sipping wine and breathing in the perfume which is mercifully strong. The yellowing foliage in the bed is that of ripening hyacinths.  In the background is my replica of the Venus de Milo before she up and lost her head.

This garden is remarkably easy to maintain. Ground covers planted in the first and second terraces have practically eliminated the need for weeding. In the top terrace, weeds are kept down by a heavy layer of mulch that I apply annually each spring.

Yet another update: By June, 2014, mulch was no longer required on the top terrace. Why? Because the lilacs and phlox had grown with utter exuberance.  There’s no place to put mulch! 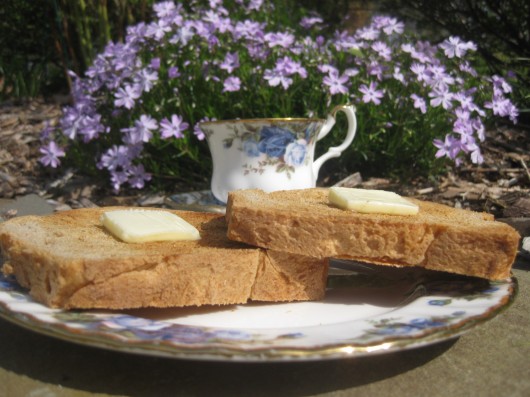 If you have a hellish hill on your own property, why not  carve it into your own piece of heaven?  Make your retaining walls no higher than three feet, as mine are, and you won’t need a structural engineer to approve your design. Such walls are multi-purpose, too. During the warm-weather months I often have breakfast in the Serpentine Garden, sitting on one of its walls with a cup of tea and a plate of toast at my side. 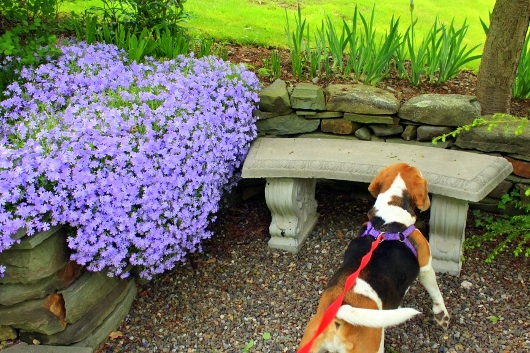 Lily loves the Serpentine Garden as much as I do. For a beagle, she has impeccable taste.

For more gardening, cooking, and household how-to, get my email updates!