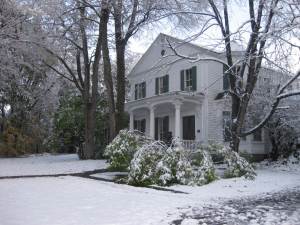 SEEMS THE INCH OF SNOW that fell here last Thursday was only a tease. For last night the heavens delivered five inches of utter madness. Pummeled was the normally-stout Syringa ‘Avalanche’ (above), which resides next the front porch. And the storm punished several other deciduous trees and shrubs here, too. First aid for these still-in-leaf subjects, and a few scenes from my white-washed autumn garden: 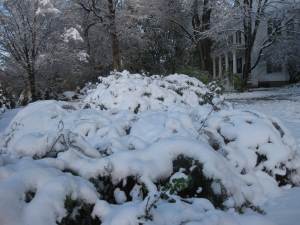 Autumn snow can be disastrous for small trees and shrubs which have not yet shed their leaves. Why? Because the snow adheres to the leaves, forcing branches to bend to the ground. This condition — especially if followed by a freeze — almost always leads to broken or permanently misshapen growth. Consequently it pays to remove the snow either as it falls, or immediately afterward. Above, last night’s snow pounded my fountainous, 8-foot tall forsythia into a pathetic, 4-foot mass. 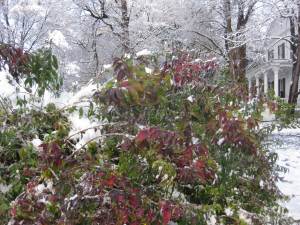 I use a broom to brush off or knock the snow from plants which would otherwise be potentially ruined. Luckily my forsythia bounced right back once the unwelcome weight was removed. 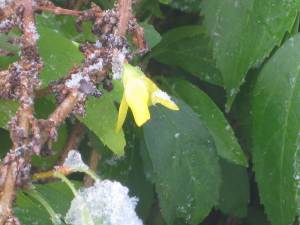 As I stood shivering in the cold, a pleasant sight warmed my soul: one of the previously buried branches revealed a flower! Forsythia requires only 30 cumulative hours of below 40-degree weather in order to bloom. Consequently after a cold September a few buds can appear in October. 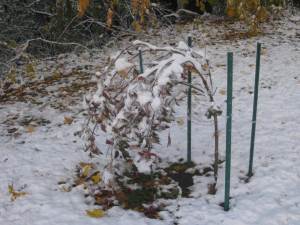 My Kousa dogwood is not having a good year. After surviving Hurricane Irene back in August, he was crushed by last night’s snow. I brushed him off this morning, and can only hope he’ll regain his upright shape. The poor guy looks sooooo depressed. 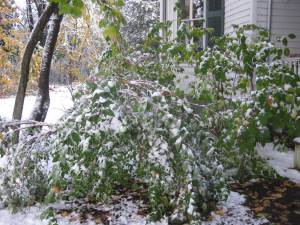 A giant mock-orange near the music room wing of the house was a sorry sight, too. Mercifully it bounced back after its burden of cold was shaken off. 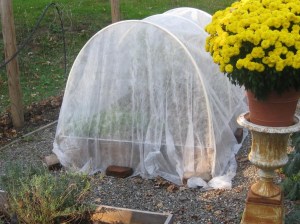 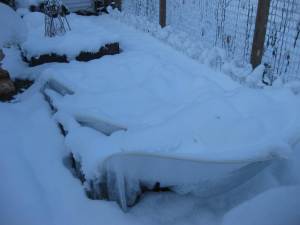 It completely collapsed under the weight of snow. But then it was not constructed to withstand January weather in October. I’ll reset the structure later today — there’s no severe weather predicted for the near future. 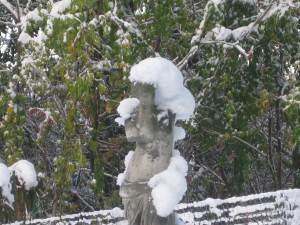 On a less-depressing note, my statues decided to show off their winter wardrobes. Above, Venus de Milo looks stylish in her pure white, wrap-around stole… 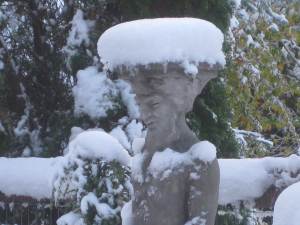 While in the Pool Garden, the Roman Satyr dons a Russian “Ushanka” hat.

How’s the weather in your neck of the woods? Is your garden dressed in vermillion and gold — or is it wearing, like mine, a shocking cloak of white?

It's Beginning to Look A Lot Like Christmas
November, 2011 Chores