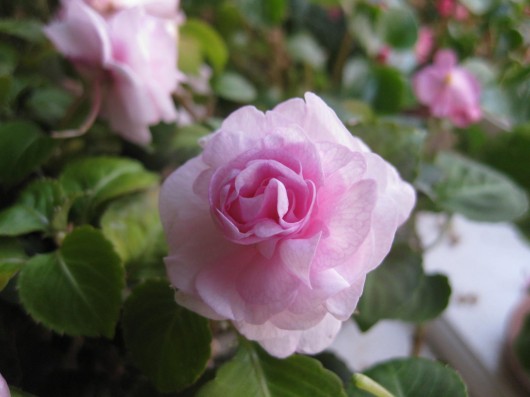 I’M GRATEFUL for the plants which are willing to bloom with summer exuberance in winter windows. Take, for instance, the ‘Fiesta Pink Ruffle’ pictured above.   I bought this Impatiens wallerana last spring, nurtured it in a pot all summer, and then brought it to the window in my upstairs bath in autumn.  Although the plant receives only weak eastern sun there, its fully-double, rosebud-like blossoms have formed in constant profusion. The only pampering the plant requires is daily water with a little high-phosphorous food mixed in.  And here’s more eye-candy for the winter-weary: 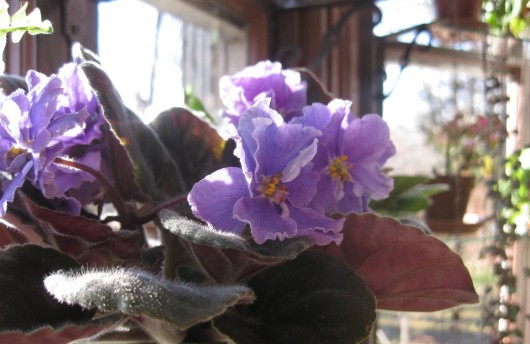 Always delightful are African violets. I bring them to the budding stage under cheap, cool-white fluorescents in my study, then move them to windows to watch them bloom.   The one above, on a shelf in my music room window, is the light purple, semi-double, ruffled ‘Allison’s Laughter.’ 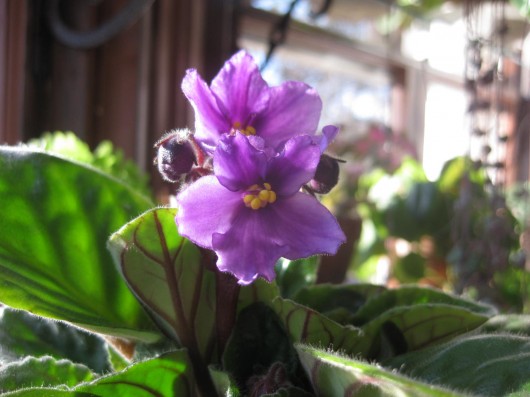 On the same shelf as ‘Allison’ is S. ‘Lunar Eclipse.’ This is another great beauty, with raspberry-purple, semi-double flowers.  The underside of its leaves are handsomely veined with red. 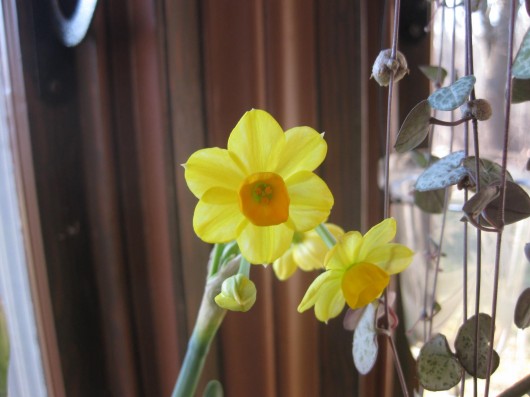 Scenting the music room just now is Narcissus  ‘Grand Soleil D’or.’ For such an easy plant, this tropical tourist is too seldom grown.  Just plant the bulbs in soil (or in pebbles and water), and 4-8 weeks later the yellow-ringed, gold-cupped flowers emerge. 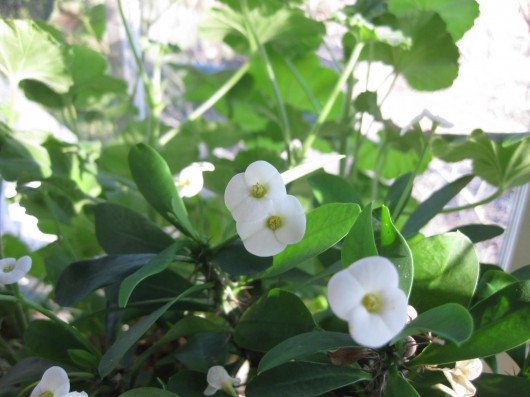 If you have no time to coddle flowering houseplants, but you still want living decoration in your home, by all means obtain  Euphorbia milii. This “Crown of Thorns” blooms  the year ’round. The white flowers look like tiny spotlights which dot the medium green foliage.  The plant requires only minimal attention. I have it in full sun in the south-east library window, where it grows almost too well with once-a-week watering (as always, with a little food mixed in).  Euphorbia is tolerant of  both heat and dry air. New York City apartment dwellers should cling to this plant. 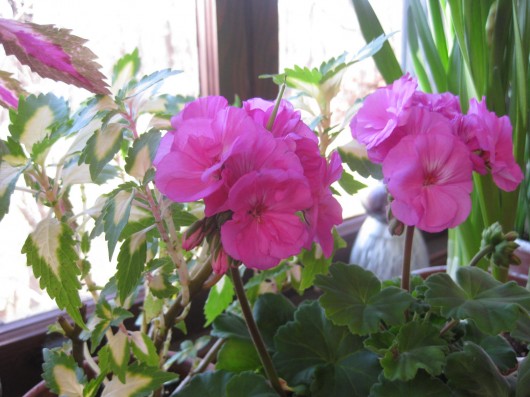 Now, back to the Music Room window, for I forgot to show you the pink Pelargonium ‘Americana.’ What’s the secret to getting great winter bloom from this common zonal “geranium” ? Well, don’t let it bloom in summer! That’s right — pinch off every flower bud the moment it forms. Denied the ability to reproduce itself, the plant, out of sheer frustration, will unleash a torrent of blossoms when it you bring it indoors in September. My own plant received this treatment, and even now, at the end of December, it has shown no signs of letting up. 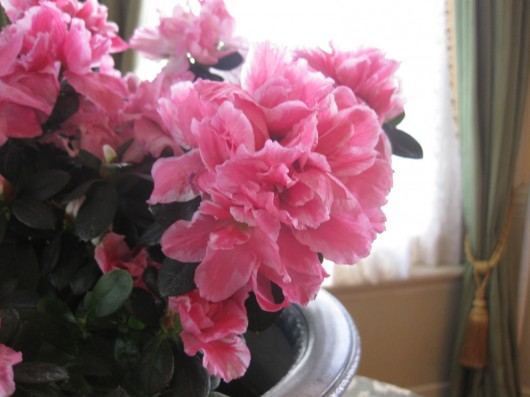 On a table in my entrance hall is a white-splashed-pink florist’s azalea. This is a gift plant with a definite future.  The trick is to give the plant a summer holiday outdoors in some shady spot. There,  if you pamper it with regular moisture and acidic plant food, it will form dozens of flower buds. Bring the plant indoors before frost, give it full sun and cool temperatures,  and every bud will open  in a spectacular show that runs from late December through the end of February, and sometimes beyond. What a plant!

Do flowering houseplants alleviate the cold, gray winter months for you, too? Let me know by posting a comment.