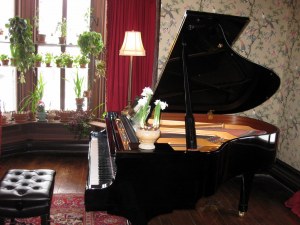 Do plants respond to music? Dorothy Retallack sought to answer that question some 40 years ago, when, as a 48-year-old student at Colorado Women’s College in Denver, she conducted a series of experiments in the school’s three bionic control chambers. Her findings were published in a small book called The Sound of Music and Plants (1973). Here are a few of the tests she performed, along with her fascinating conclusions:

Retallack’s first experiment involved a single tone. In the first chamber, plants were played a continuous tone for 8 hours a day. In the second chamber, the same tone was played off-and-on again, for three hours at a time. In the third chamber, no tone was played at all. Plants in the first chamber, where the continuous tone played, all died within 14 days. But those in the second chamber thrived, more so than the plants in the third, silent chamber.

In her next experiment, fresh plants were placed in two chambers, each equipped with a radio. In the first chamber, the radio was tuned to a rock station; in the other, a soft-rock, or “middle-of-the-road” (M.O.R.) station played. Only three hours of music was played daily. After five days, Retallack noticed a striking change. In the M.O.R. chamber, plants were not only thriving, but bending towards the radio! In the rock-station room, plants displayed poor, spindly growth. After two weeks, the M.O.R. plants were lush and healthy, uniform in size, and bending 15-20 degrees toward the radio. The rock-station plants, however, were bending away from the radio, and in the final stage of death.

In another test, plants “listened” to recordings of ancient North Indian music performed on sitar and tabla in the first room, and Bach organ music in the second. The third chamber was kept silent. Plants grew best in the rooms where the Bach and Indian music were played. In both chambers, they leaned towards the speakers, but even more so for the sitar music than Bach.

Plants, she found, hated Jimi Hendrix, Led Zeppelin, and Vanilla Fudge. And as for country music, the plants subjected to it showed no response whatsoever.

Don Robertson, a contemporary composer, is convinced that plants can prosper in an atmosphere of harmonious, rather than discordant sounds. “I spoke with Mrs. Retallack about her experiments a few years after her book was published,” says Robertson on his website, “and at that time I began performing my own experiments with plants using a wood-frame and clear-plastic-covered structure that I had built in my back yard. For one month, I played three-hours-a-day of music from Arnold Schönberg’s negative [dissonant] opera Moses and Aaron, and for another month I played three-hours-a-day of the positive [harmonious] music of Palestrina. The effects were clear. The plants subjected to Schönberg died. The plants that listened to Palestrina flourished.”

Do you play music for your plants? Which composers or artists do they prefer? Chopin? Laura Nyro? Aerosmith?

Don’t miss a beat at A Garden for the House…sign up for Kevin’s weekly newsletter!

What to Do in January
Hummingbird Alert!