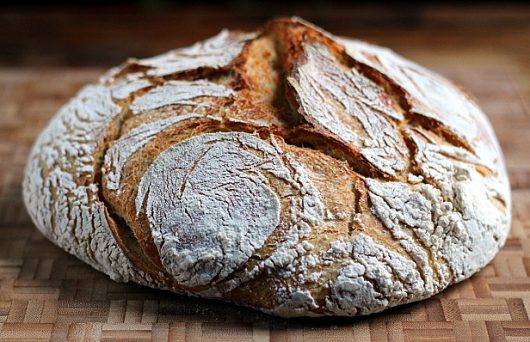 I can’t play the violin. I can’t dance like Justin Bieber. But I can produce a fantastic sourdough boule! By “fantastic,” I mean a boule that boasts a crackling-crisp crust, a soft, chewy interior, and a tart, tangy flavor. Watch me make this blissful bliss: 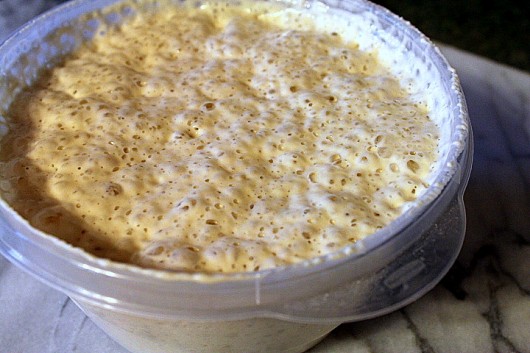 Note: Sourdough bread gets its yeasty rise (and its tangy taste) from wild yeast, or “sourdough starter.” You can make your own starter, just as I do. Here’s the simple, 2-ingredient recipe.

Another note: The day before you plan to bake, be sure to feed your starter every 8-12 hours, or until you have at least 2 1/2 cups. You’ll need 2 cups of starter for the following loaf. (The extra 1/2 cup will insure that you don’t run out of starter!)

Yet another note: Because I’m a lazy baker, I used a standing mixer (outfitted with a dough hook) to mix and knead this bread. But you can roll up your sleeves, and prepare the dough entirely by hand. 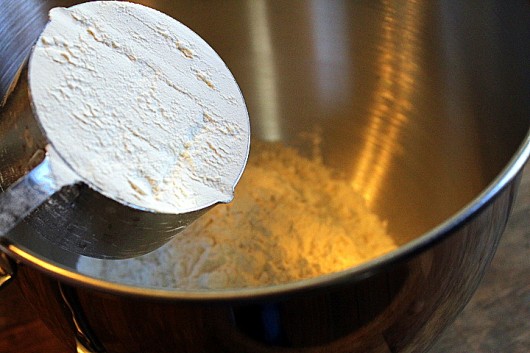 To start, tip 3 cups all-purpose or “plain” flour into the bowl of a standing mixer. 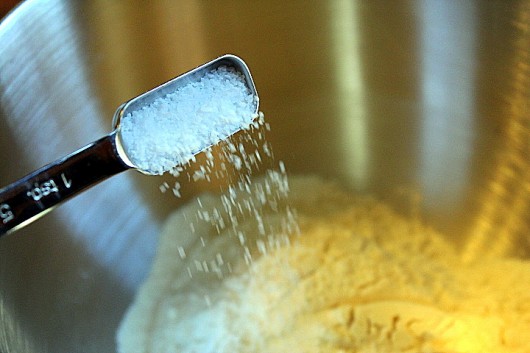 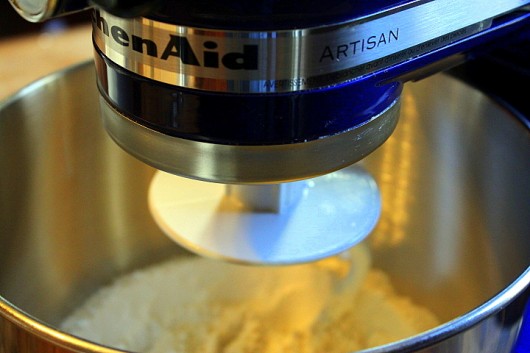 Blend the flour and salt at “low” speed until combined — about 15 seconds. 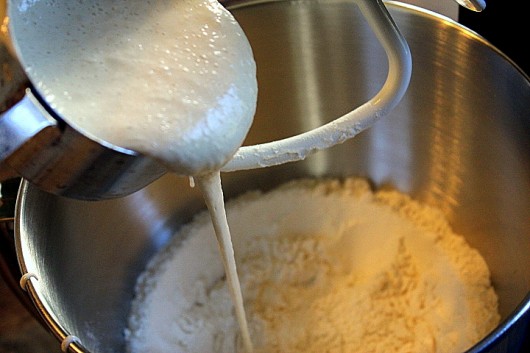 Now add two cups sourdough starter. My starter was created on March 5, 2015, so it is now 45 days old, which, as sourdough starters go, isn’t old at all. But during this time it has developed a tantalizingly tangy, and somewhat alcoholic aroma.

I have a slightly alcoholic aroma too. But only on Friday evenings. 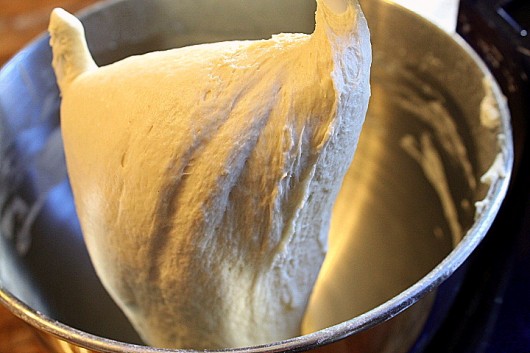 And knead the dough at “low” speed until the flour disappears. Then boost the speed to “medium” (number 4 on my KitchenAid model), and knead until the dough becomes smooth and elastic, but still tacky to the touch — 5-7 minutes. 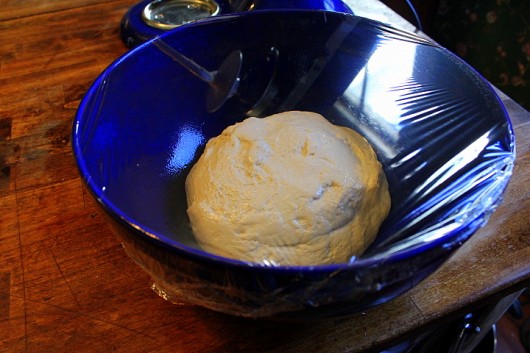 Scrape the dough into a large, lightly greased bowl. Then flip the dough to grease its other side. Cover the bowl with plastic wrap, and place it in a warm location until doubled in volume — 2-3 hours.

Tip:  The dough will rise no matter where you place it. But in a cool location, it might take 7-8 hours double in volume. 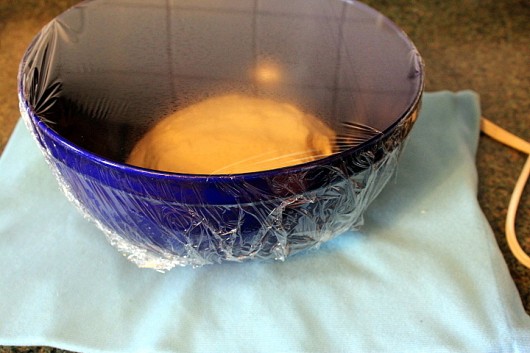 Another Tip: If you are an anxious baker, just do what I do, and place the bowl on a common heating pad. Set the pad to its lowest heat-setting. 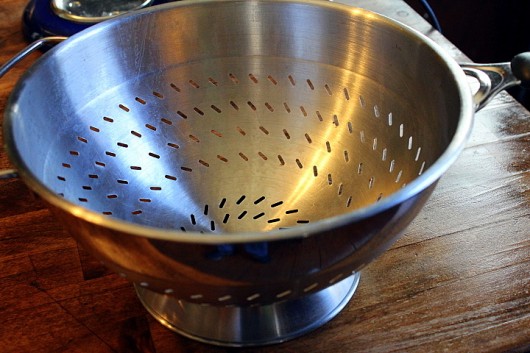 While the dough is rising, fetch a common colander, and place it on your work surface. 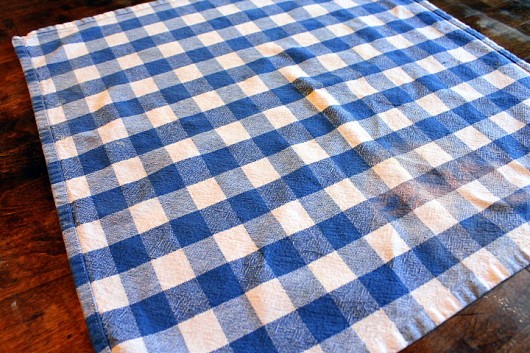 Then grab a blue and white tea towel… 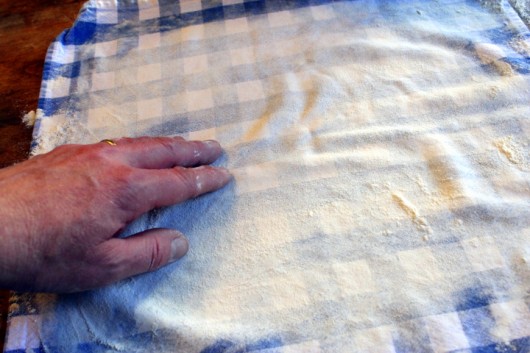 And rub it with flour. 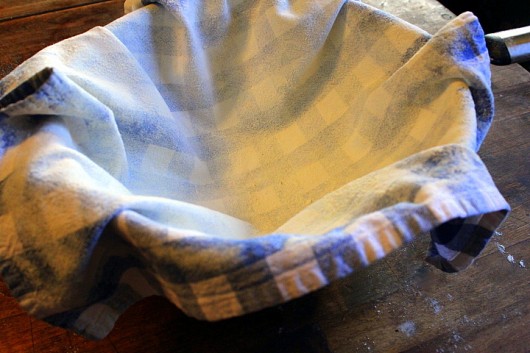 Line the colander with the floured towel. 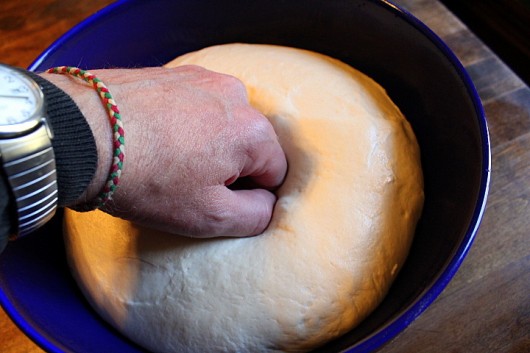 When the dough has doubled in volume, punch it down. 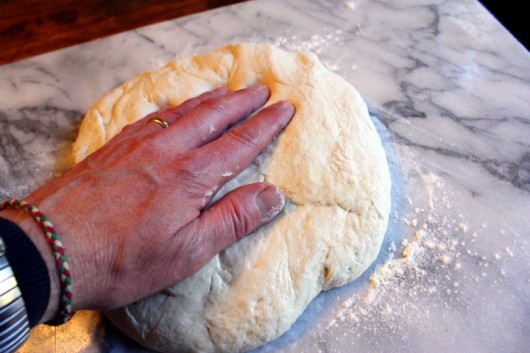 Now pat the dough out on a lightly floured surface… 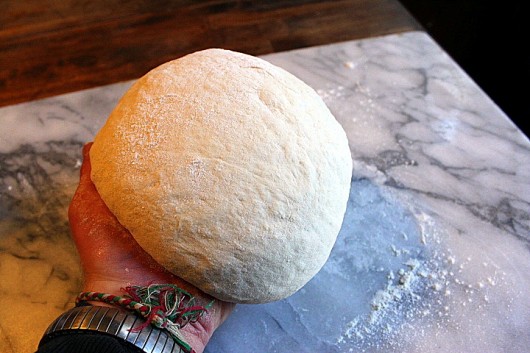 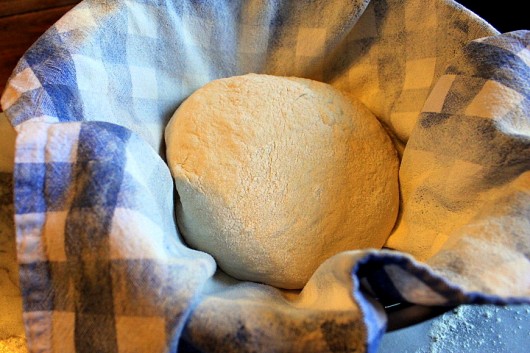 Then set the boule seam-side-down in the prepared colander. 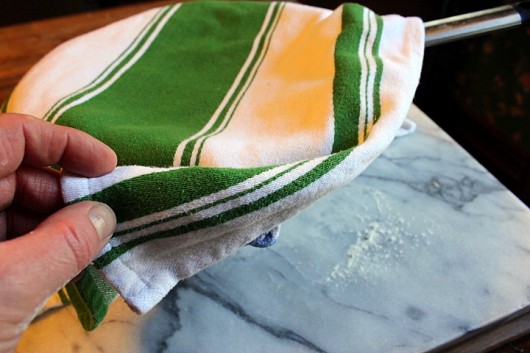 Cover the colander with a green and white tea towel, and set the works in a warm place until the dough doubles in volume — 45-60 minutes. 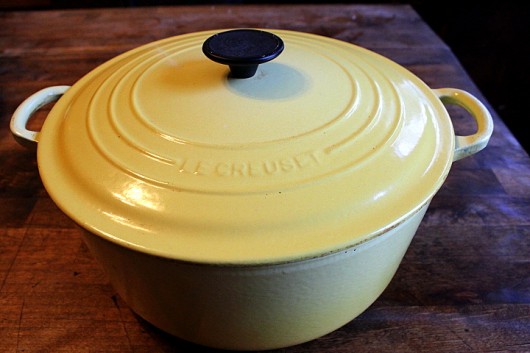 While the boule is rising, grab a heavy pot with a lid (I used my 7 quart enameled cast-iron Dutch oven), and set it on the center rack of the oven. Preheat the oven to 450°F. 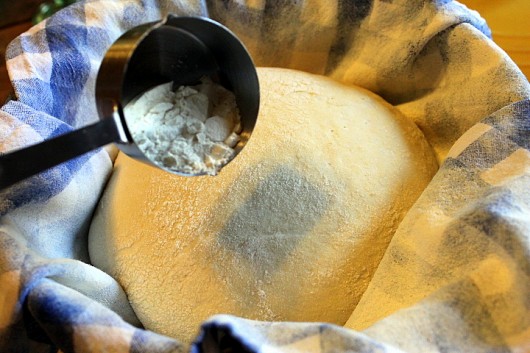 When the boule is ready, scatter a little flour or cornmeal over the top… 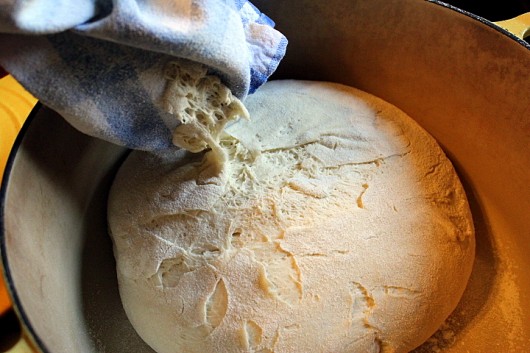 Remove the preheated pot from the oven. Then gently lift the towel, and use it to flip the dough into the pot, the seam-side now facing up. Don’t fret if some of the dough sticks to the towel.  Cover the pot, and return it to the oven for exactly 30 minutes. 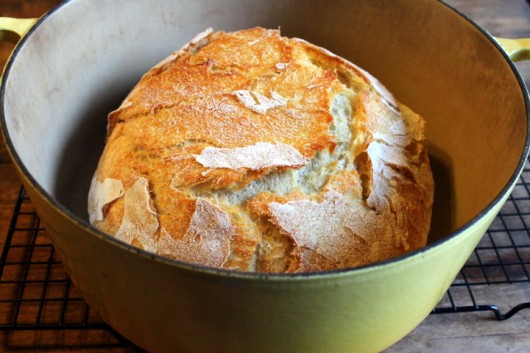 Then uncover the pot, lower the oven temperature to 400°F, and bake until the crust bronzes and splits at the seams — exactly 15 minutes. Transfer the bread to a wire rack to cool. 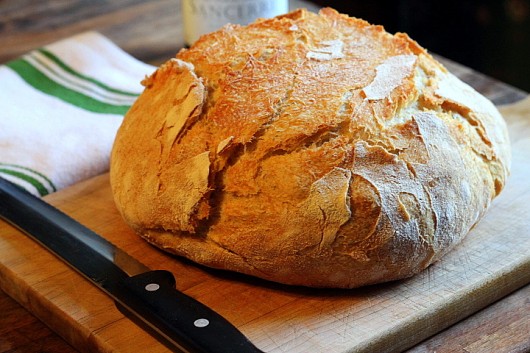 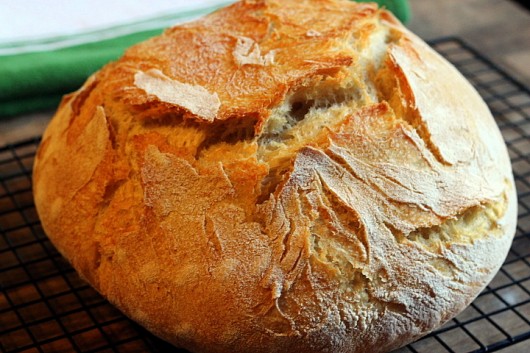 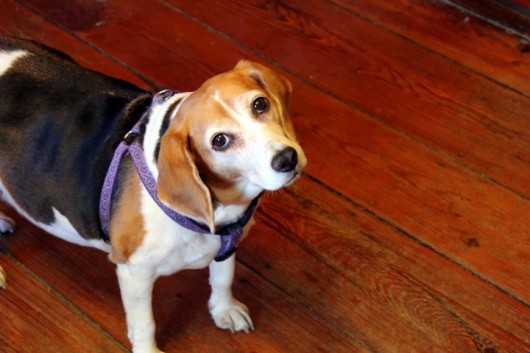 Lily is in full agreement with our decision. 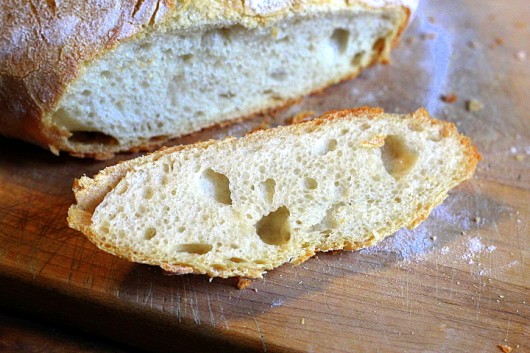 This is the bread you want for sopping up fruity olive oil, or for spreading with butter. It’s terrific for sandwiches and toast, too. 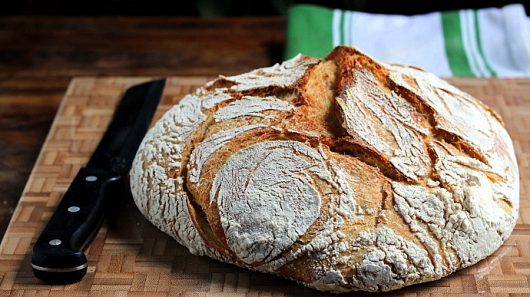 Update May 16, 2016: I’ve made this bread many times over the past year. The recipe has never failed me!

Think you’ll give this crispy, crackling, Crusty Sourdough Boule a try? You can let me know by leaving a comment.

Special equipment: A standing mixer; a large, lightly-greased bowl for rising the dough; a colander; 2 tea towels, and a 5-7 quart oven-proof pot with a lid (enameled cast iron is ideal)

Tip the flour and salt into the bowl of the standing mixer, and blend at “low” speed for 15 seconds. Add the sourdough starter and water, and blend at low-speed just until the flour disappears into the liquid ingredients. Then increase the speed to “medium,” and knead until the dough becomes smooth and elastic — 5-7 minutes.

Scrape the dough into the greased bowl, then invert the dough to grease its other side. Cover the bowl with plastic wrap. Set the bowl in a warm location until the dough doubles in volume — 2-3 hours.

Meanwhile, dust one of the tea towels with 2 tablespoons of flour. Rub the flour into the towel, and then arrange it as liner in the colander.

When the dough has doubled in volume, punch it down. Then scrape the dough onto a lightly-floured surface, and pat it out. Form the dough into a ball, and place it, seam-side-down, into the lined colander. Cover the colander with the second tea towel. Let the dough rise until doubled in volume — 45 minutes to 1 hour.

While the dough is rising, place the pot (covered with its lid) on the center rack of the oven. Preheat the oven to 450°F.

Remove the pot from the oven, and place it on your work surface. Then gently pick up the floured towel, and use it to flip the dough into the pot, the seam now facing up. (Don’t worry if some of the dough sticks to the towel.) Shake the pot to help center the dough. Immediately cover the pot, and return it to the oven. Bake for exactly 30 minutes. Then uncover the pot, lower the oven temperature to 400°F, and bake until the crust turns bronze and splits at the seams — 15 minutes.

Transfer the boule to a wire rack. Let cool completely before slicing.