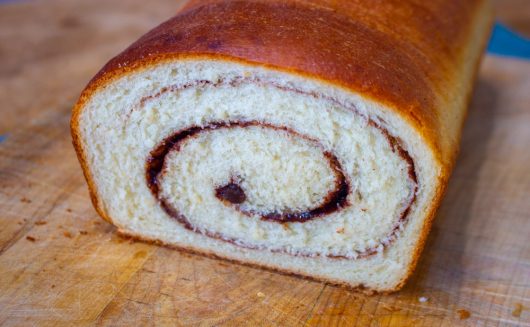 Ah, Cinnamon Swirl Raisin Bread. I made it. Ate it. Loved it. I think you’ll love it, too! Here’s the easy (yes, easy) recipe for this hand-made loaf that is delicious, decorative, and downright addicting: 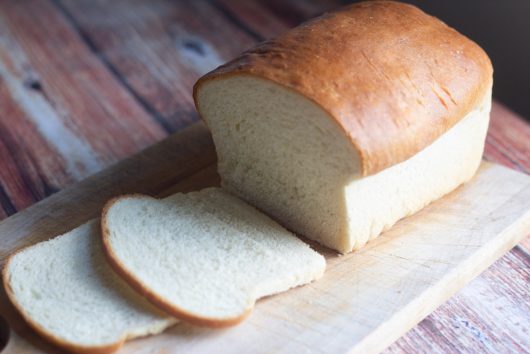 The recipe begins with the ingredients for Basic White Bread. To watch me make the dough — and to learn how to properly knead yeast dough by hand —  click here.

And…to watch me make Cinnamon Swirl Raisin Bread right before your very eyes, click the “play” arrow above! Scroll down for the printable recipe. 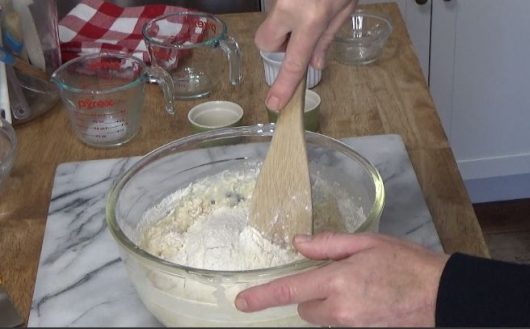 In a mixing bowl, stir together some water, yeast, sugar, milk, shortening (or softened butter), salt, and flour. All-purpose flour works fine here, but you may certainly use bread flour if you have it on hand. 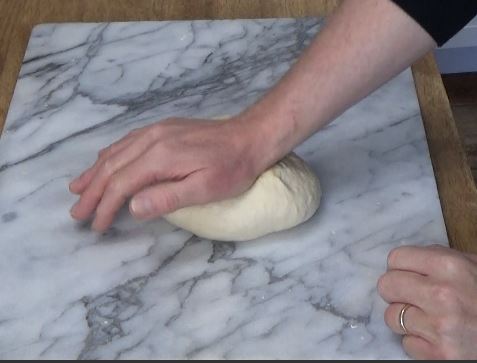 Now roll up your sleeves, and knead the dough until it is smooth and elastic — about 8 minutes. 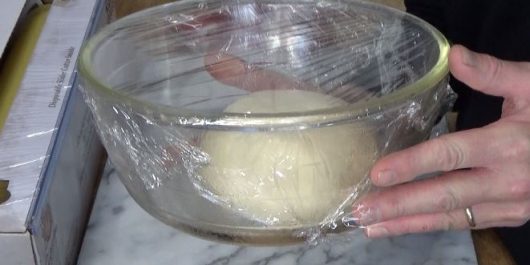 Put the dough in a warm-ish location until it doubles in volume — about 90 minutes. 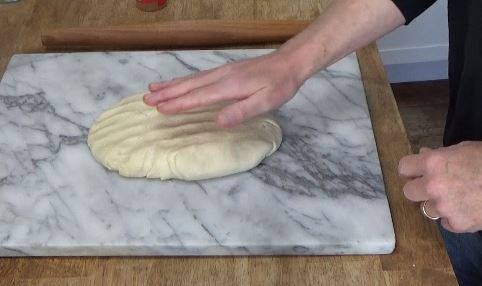 Deflate the dough, and then pat it into a rough rectangle on a non-floured surface. 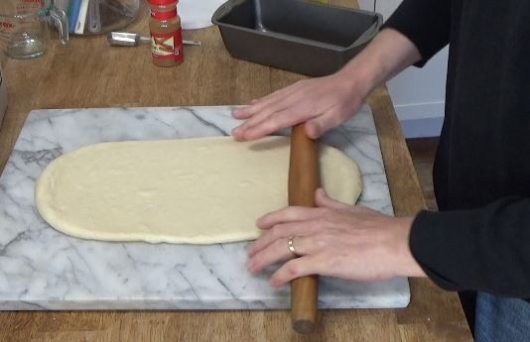 Then grab your rolling pin, and roll the dough into a rectangle that is 9 inches wide and approximately 18 inches long. 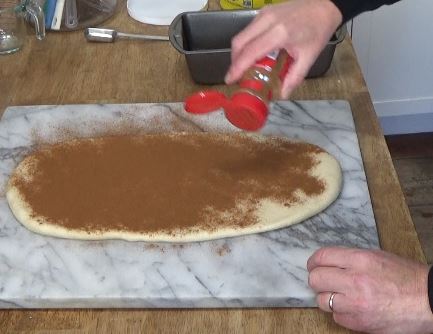 On top of the rectangle, sprinkle on a generous layer of ground cinnamon. The more cinnamon you use, the more pronounced the aromatic brown swirls will be. 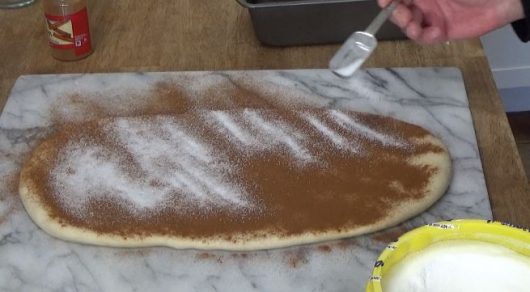 Then add some sugar… 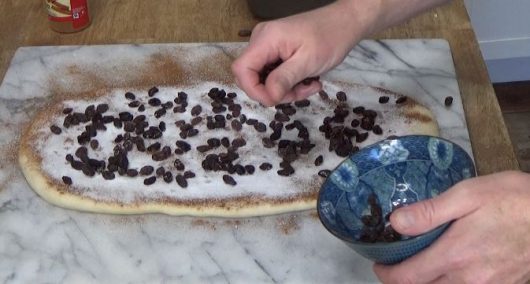 And some raisins! (Hate raisins? Omit them, and just make “Cinnamon Swirl Bread” instead!) 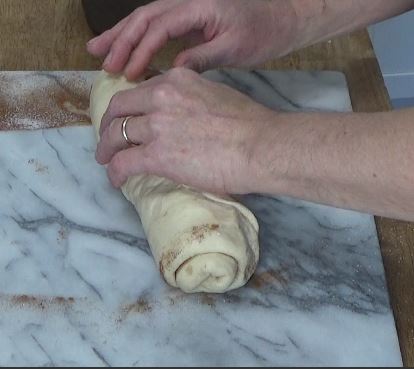 Next, starting at one of the short (9-inch) ends, tightly roll the rectangle into a cylinder. Pinch the seam to seal it. 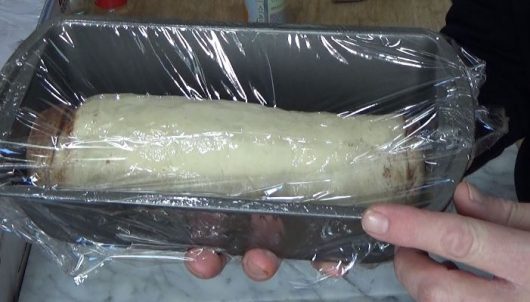 Drop the dough seam-side-down into a lightly greased 9×5-inch loaf pan. Then lightly spray the top of the dough with vegetable spray, and cover it loosely with cling film.  Let the dough rest until it has doubled in volume — 30-45 minutes. Halfway through rising time, preheat the oven to 425°F. 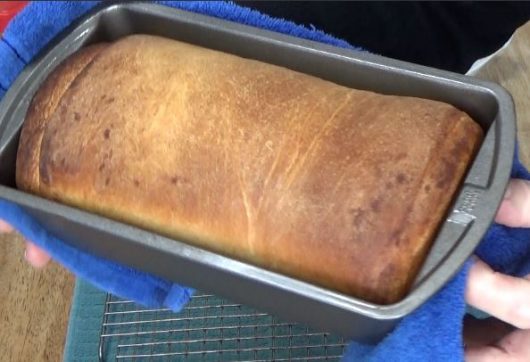 Bake the loaf until the top browns attractively, and your whole house smells like a high-end bakery (what an inviting scent that is!) — 25-30 minutes. 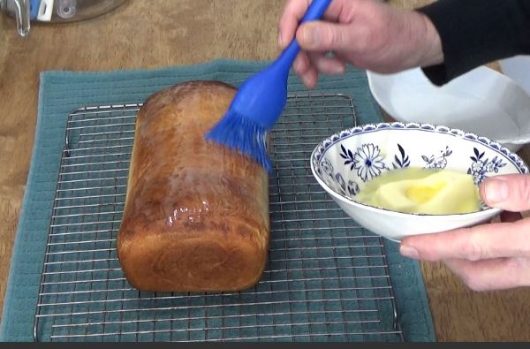 Immediately unmold the loaf onto a wire rack, and then brush a little melted butter over the top crust. 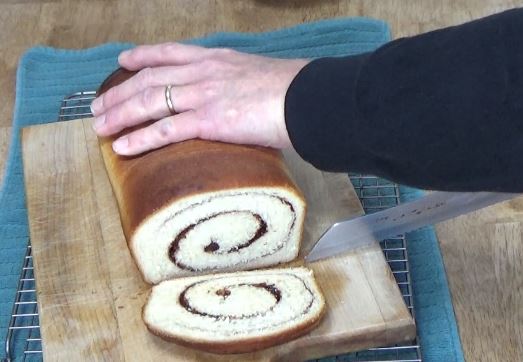 When the loaf has cooled to room temperature, cut a nice fat slice, and enjoy it with coffee or tea! For an extra-special treat, toast a slice and top it with butter. YUM. 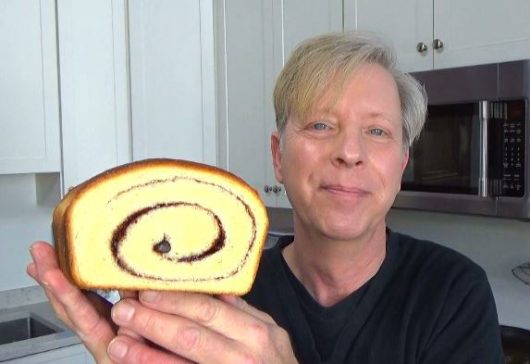 True Confession: To test the recipe, I made this Cinnamon Swirl Raisin Bread 3 times in the past 3 days. 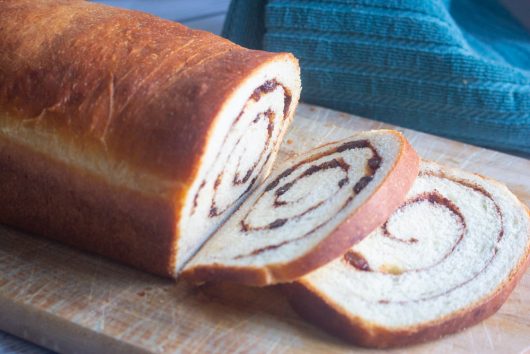 Another Confession: In the past 3 days, I have eaten — all by my lonesome — 2 1/2 of the aforementioned loaves. The remaining bread will be consumed while I type out the following printable recipe. (Oink.) 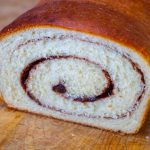