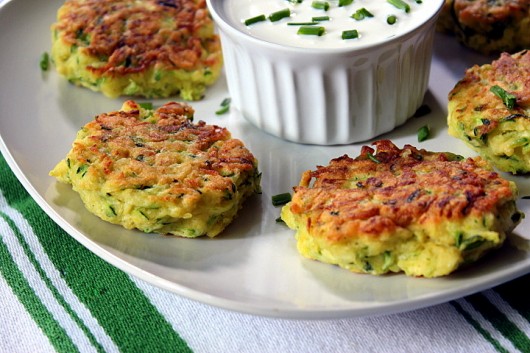 WHAT’S THE DIFFERENCE between good Zucchini Fritters and great Zucchini Fritters? Well, first the crust. It should be delightfully crunchy. Then the interior should be firm but smooth, and loaded with good zucchini flavor, plus other tastes such as fresh lemon and chive. And finally, when you bite into the fritter, you should hear a choir of angels sing. Such exquisiteness is not difficult to produce: 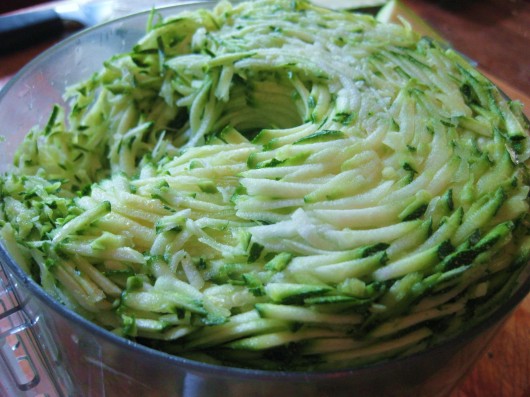 1. Shredding the Zucchini. Slice off and discard both ends of the squash. Cut the squash crosswise in half. Then cut each half lengthwise in half. Shred the pieces on the shredding disk of a food processor.

Pour the shreds into a large bowl, and sprinkle  with 2 teaspoons kosher salt. Give the shreds a toss, then let them drain for about 10 minutes. 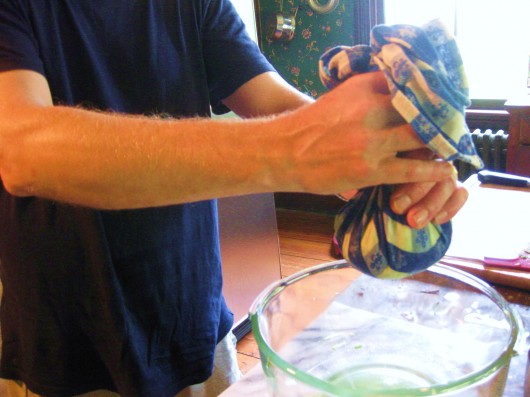 2. Squeezing the squash. Grab a handful of shredded zucchini, give it a squeeze, and then place it in a clean kitchen towel. Twist and squeeze the towel over a bowl or sink to relieve most of the water from the squash. You’ll be amazed (I certainly was) at how much water comes out. Pour the squash into a large bowl. Repeat this step for the remaining squash. 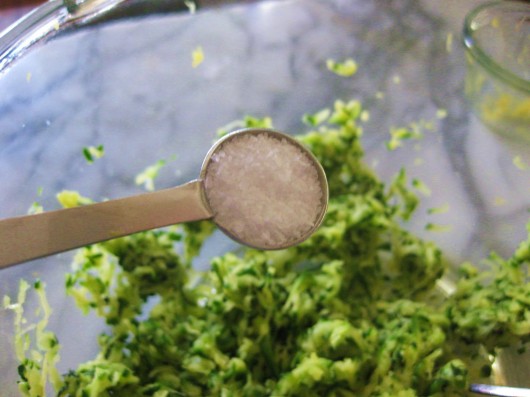 3. Flavoring the Squash.  To the bowl of squeezed-out squash, stir in 1/2 teaspoon salt  (the other salt you added will  have escaped with the liquid) and several grinds of black pepper. 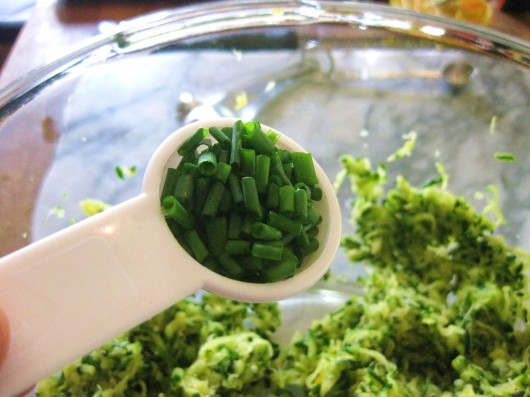 Also stir in a tablespoon of finely chopped chives… 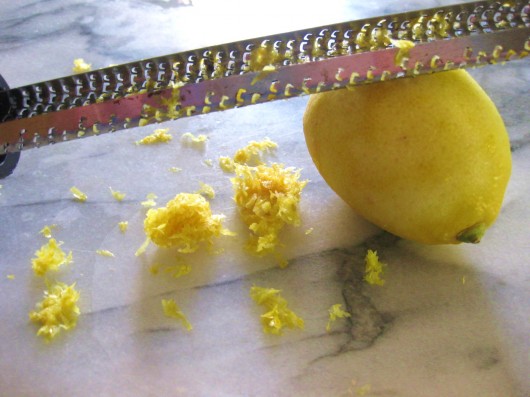 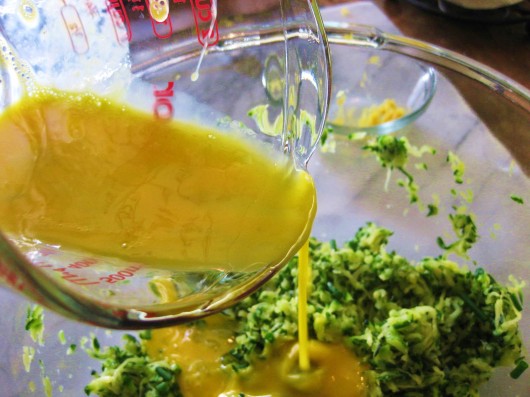 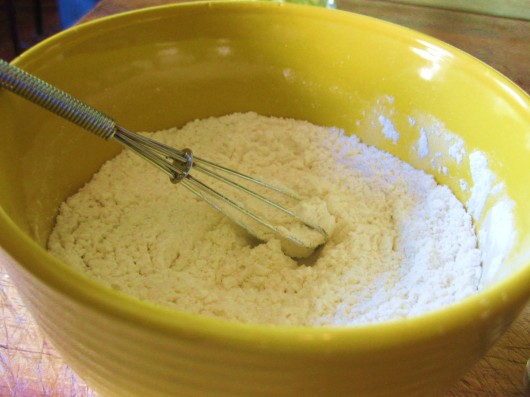 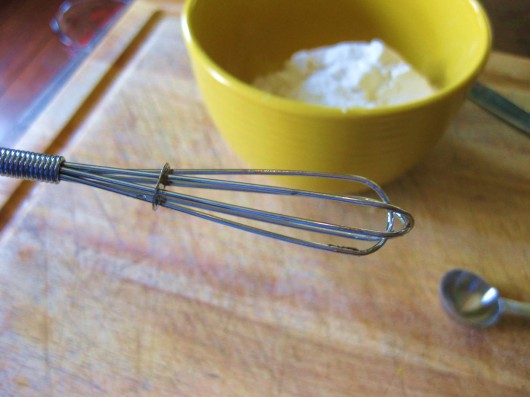 I can’t tell you how often I use this tiny wire whisk. It came to me as a Christmas present, attached to a mug and a package of gawd-awful “Swiss Miss” instant hot chocolate.  Because I make hot chocolate the old-fashioned way, I threw out the powdered (just add water!) mix, but kept the mug and whisk.

Dump the flour mixture into the zucchini, and stir just enough to coat the shredded squash. The zucchini mixture will seem very dry. 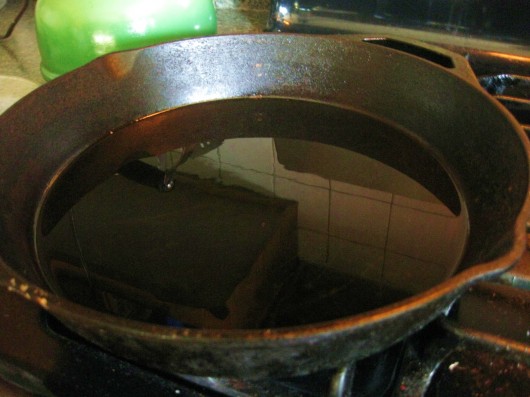 5. Frying the Fritters. At this point, pour a glug of olive oil into a skillet. Heat the skillet over a medium flame.

Cast-iron is my skillet of choice not only for fritter-frying, but for open-hearth cooking, too. Such pans are also useful as weapons, and I don’t mean in the culinary sense. In the 1960s, housewives commonly  hit  philandering husbands over the head with them.  Or at least they did in 1960s cartoons. I grew up with such cartoons.

I also grew up with Mrs. Olson. Mrs. Olson used to tell young housewives how to make good coffee. So their husbands wouldn’t divorce them. 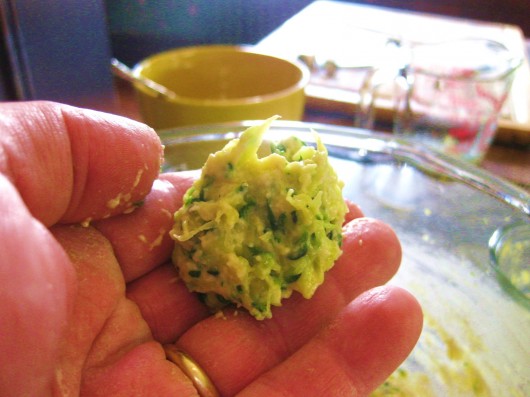 Back to fritter-making. Pick up a cherry-tomato sized clump of  dough. Don’t bother flattening it out, or it will  make a mess all over your hands.  As always, I speak from experience. 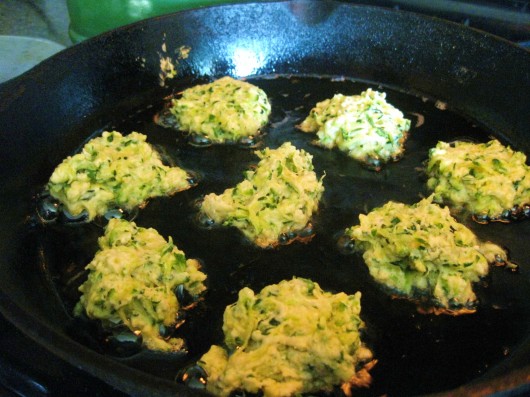 Lay as many as will fit in your skillet, making sure there is an inch or two of air-space between each fritter. Crowded fritters won’t brown very well. Let them fry for 3-4 minutes. 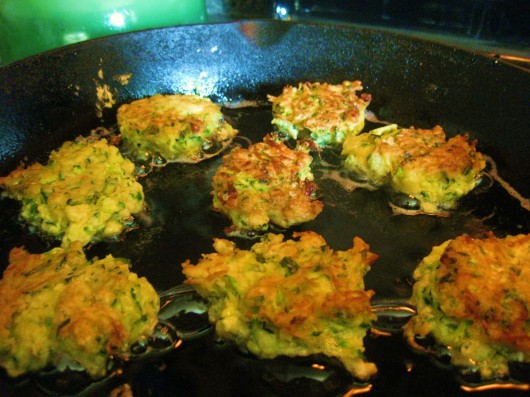 When the bottom of the  fritters have turned a lovely golden brown, flip them over, and flatten them slightly with the back of a spatula.  Cook the other, “non-public” side for only a minute or two. And if the fritters seem to be turning black, not brown, you will have to lower the heat for your next batch.

Drain the morsels on several layers of paper towels. Then, if you are not going to serve them right away, set them on a baking sheet, and keep them warm in a 200F oven. 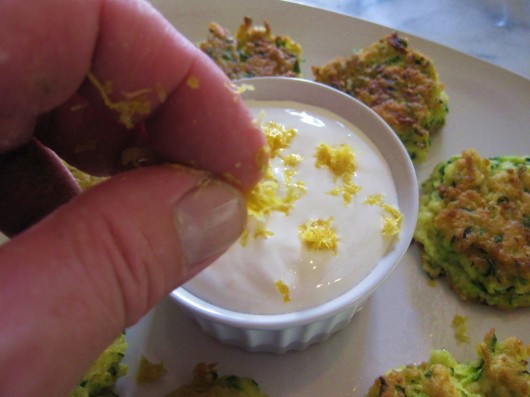 We need a dreamy dipping sauce which is worthy of these fabulous fritters.

Stir the juice of one lemon into one cup of sour cream. Then stir in the remaining 1/2 Tablespoon of lemon zest.  Pour this mixture into a small bowl.  Arrange the fritters on a serving platter, with the bowl of sauce set in the middle. 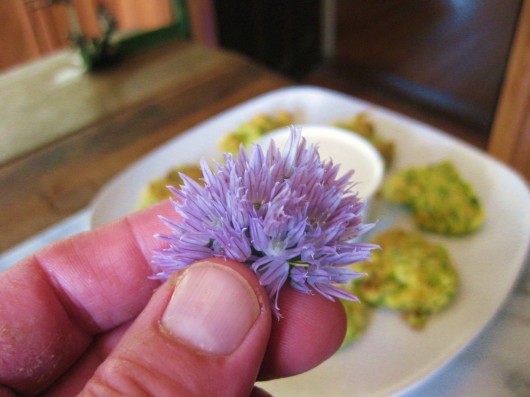 And then, if you happen to have a chive blossom in your garden — as I obviously did — snip it, and then rip out its lovely lavender petals. 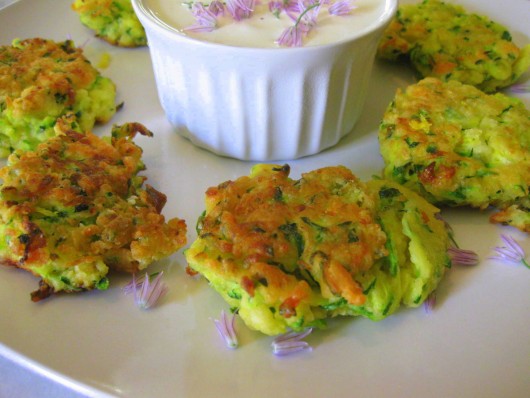 Scatter the petals over the sauce, the fritters, and in any open space on the platter.

What’s that you say?

Then simply mince a few chives, and use them as garnish.

Or, forget the garnish, and just eat the fritters already. You know you want to.

Need a printable version of the above recipe? I’m happy to oblige:

Think you’ll try these insanely-delicious fritters? You can let me  know by leaving a comment. As always, an angel rings a bell whenever anyone posts their thoughts here. 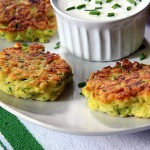 Shredding and salting the zucchini --