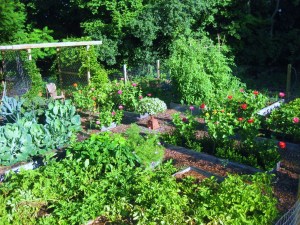 BECAUSE AUTUMN IS AROUND THE CORNER — it begins, in fact, this Thursday at 5:05 AM — I think now is the ideal time for a rear-view look at our vegetable gardens. Who achieved, at summer’s end, the harvest they dreamed of back in Spring? (Not me!) Who over-planted potatoes but under-planted peppers? (Guilty as charged.) Tell us about your successes, your failures, and what you learned during the garden season that was 2011:

My lesson: I need a better watering system. Dragging hoses around and setting up sprinklers is not only exhausting work, it’s an inefficient use of water. But arranging such a system for a series of raised beds (which I will never part with) isn’t an easy feat. If you’ve set up drip irrigation for your own raised beds, mind telling me how involved the project was? Also, did you tackle the job yourself or hire it out?

Now it’s your turn. Please share your veggie-garden-in-hindsight thoughts — whatever they may be — in the comments field below.