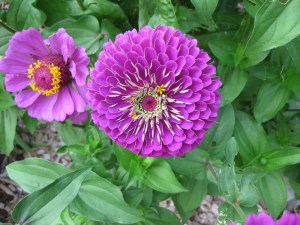 WANT TO GET A JUMP-START on your veggies and flowering annuals (like the zinnia ‘Violet Queen’ above) without the fuss of fluorescent lights? Plant the seeds outdoors, in the same kind of miniature greenhouses used for winter-sowing. Outdoors, seeds won’t germinate as quickly as they would indoors under lights. But they will sprout earlier and more reliably than direct sowings made in the open garden. Here in zone 5-b, late March is the perfect time to plant the seeds: 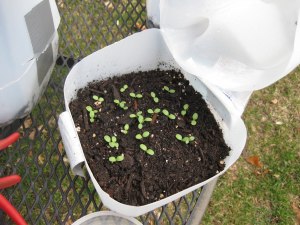 And here are other flowers and veggies which lend themselves to “winter”-sowing in late March and early April:

There is one caveat to early outdoor sowing. Although the seeds are somewhat protected in their vented containers, a sudden hard frost is likely to kill any which have sprouted. Therefore, keep an eye on the forecast! To protect seedlings on frosty nights, simply throw a blanket over the containers of sprouted annuals and veggies. (Thankfully, winter-sown perennials do not require protection from frost.)

Aside from their need for frost-protection, spring-planted vegetables and flowering annuals are treated in exactly the same manner as winter-sown perennials. Provide the seeds with constant moisture (if rainfall is not sufficient). Fertilize too, but only after seedlings have developed their second, or “true” set of leaves. Unhinge the covers of your containers on pleasantly warm days, and let the seedlings revel in fresh air. Replace the covers at dusk. To avoid overheating the seeds, set their containers in an eastern exposure that is protected from wind.