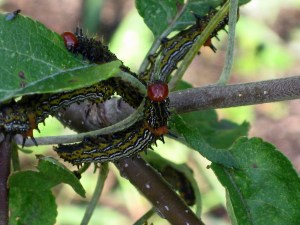 TRUE, there were only ten apples on my ‘Gala’ apple tree, but I had grand plans for them. “I’ll bake a pie!” was one thought. “I’ll give them away to friends!” was another. But this morning I learned that my fruit-fantasy was in vain. Why? Because a colony of very lovely but very destructive caterpillars got to my apples first.

Like most modern apple tree varieties, ‘Gala’ is disease resistant. In fact, the nurseryman assured me that it would require no spraying. But he neglected to inform me of the red-humped (and headed) caterpillar, Schizura concinne, which has skeletonized every leaf of my tree, and deposited some sort of goo on the apples. 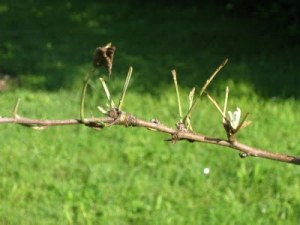 I blame the loss of my meager crop on my own lack of attention. Had I noticed the very first skeletonized leaf, I could have sprayed the tree with Bacillus thuringiensis, or “BT.” BT is a natural bacterial preparation that causes a disease-like condition in red-humped caterpillars. They stop eating several hours after feeding on a sprayed leaf and die a day or two later. I find BT completely acceptable for green-gardening; unlike the more toxic, broad-spectrum insecticides, it does not harm beneficial insects.

I expect my tree to survive this summer’s defoliation. But I’ll be more watchful next year, and have an economy-sized bottle of BT on hand.

And that is today’s woeful tale from A Garden for the House. I hope your apples are safe and sound, and free of the Red-Humped Monster.

What to Do in August
How To Propagate Petunias, Wax Begonias & Impatiens for Winter Bloom Indoors