Yesterday, for the first time in my life, I made — and ate! — Welsh Rabbit. Are you familiar with this cheese-on-toast tavern fare from 18th-century England? Click the “play” arrow above to watch the dish come together in my kitchen. Then scroll down for some fascinating historical notes and a nifty printable recipe:

In early 18th-century England, “Welsh Rabbit” was probably a jocular (read: patronizing) description for roasted cheese on toast. The term would be politically-incorrect by today’s standards, for it implied that people in Wales were so poor that they ate cheese and called it “rabbit.” A put-down for sure, but the name stuck.

Beginning in 1781, Welsh Rabbit was sometimes referred to as  Welsh “Rarebit.” What’s a rarebit? Nobody knows!

From Wikipedia: Hannah Glasse, in her 1747 cookbook The Art of Cookery, provided recipes for “Scotch Rabbit,” “Welsh Rabbit,” and “English Rabbit.” Check out Hannah’s directions:

To make a Scotch Rabbit, roast a piece of bread very nicely on both sides, butter it, cut a slice of cheese about as big as the bread, toast it on both sides, and lay it on the bread.

To make a Welsh Rabbit, toast the bread on both sides, then toast the cheese on one side, lay it on the toast, and with a hot iron brown the other side. You may rub it over with mustard.

To make an English Rabbit, toast a slice of bread brown on both sides, lay it in a plate before the fire, pour a glass of red wine over it, and let it soak the wine up; then cut some cheese very thin and lay it very thick over the bread, and put it in a tin oven before the fire, and it will be toasted and browned presently. Serve it away hot.

Served with an egg on top, Welsh Rabbit becomes Buck Rabbit, or a Golden Buck.

Welsh Rabbit blended with tomato (or tomato soup) is a Blushing Bunny. 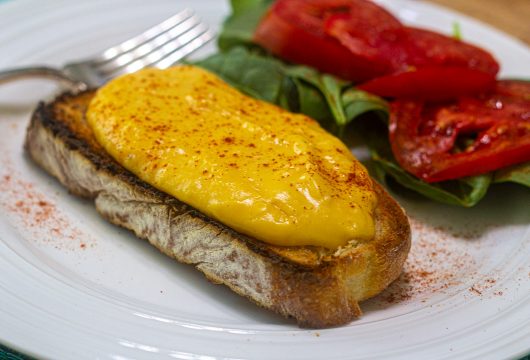 The Welsh Rabbit that I enjoyed yesterday (watch the video up top) was adapted, slightly, from a 1950 recipe in The Betty Crocker Picture Cookbook. The cheese is melted in a bechamel sauce that’s enhanced with Worcestershire, ale, and mustard. It’s truly delicious. I poured the golden lava over thick, toasted slices from a crusty boule. 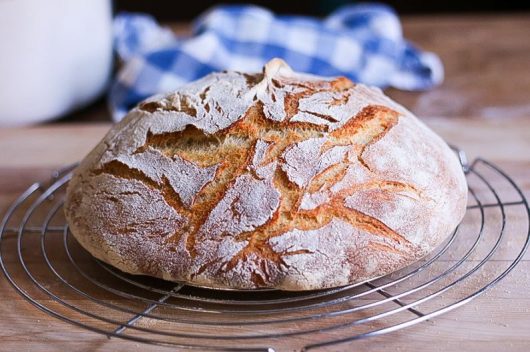 The crusty boule in question. Here’s the recipe. 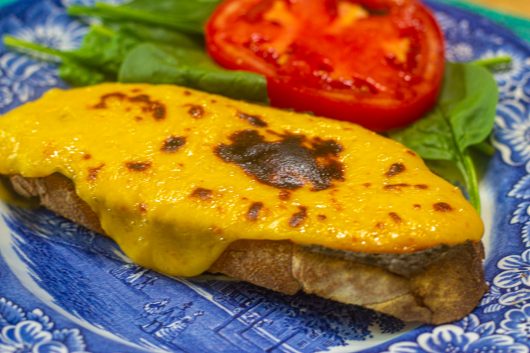 Update: I made the same recipe this morning, only this time I took the advice of one of my YouTube subscribers, and placed the “rabbit” beneath the broiler for 30 seconds. The result? A Welsh Rabbit that was infinitely more picturesque! (And just as wonderful as its non-broiled kin.)

Have your own, heirloom version of Welsh Rabbit? Talk to me in the comments section below. xKevin 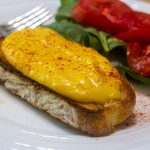