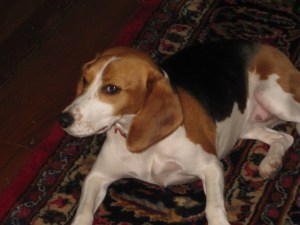 Our beloved beagle, Lily, is not well. She had to spend the night in a crate at the veterinary clinic, hooked up to an IV-drip. Because I’m awaiting a call from the vet, and feeling very anxious, I thought I’d take a moment to tell you how this little bundle of joy entered our lives.

The morning of July 6, 2008, Mr. Fox and I heard the incessant, gut-wrenching yelps of a dog. We ran out to the street, only to discover a little beagle had been struck by a car. Blood was everywhere. A small crowd had gathered, and the beagle, who was obviously in shock, bit anyone who tried to touch her. This included the careless motorist who had hit her. While Mr. Fox crossed the street to investigate, I ran to call my dog-loving friend DeGuerre. DeGuerre, I sensed, would know what to do. Mr. Fox, being a gentle soul, managed to calm the little dog. She even allowed him to caress her back.

Because it was a Sunday morning, all veterinary clinics were closed. That is, except an “emergency” one a great distance away. Thus DeGuerre, Mr. Fox and I drove the beagle to the clinic. There, we were told euthanasia was in order, for the dog had no ID, and would require at the minimum very expensive surgeries, including a leg-amputation. We said “No!” to the idea of ending the dog’s life, and agreed to incur all expenses. The vet carried the dog into another room for examination.

After a long, anxious wait, the vet reappeared. She told us the dog had a microchip, which, when scanned, revealed her history at shelters, and the current owner’s name, address, and telephone number. The beagle, we learned, had been adopted just 30 days prior to the accident, and had been spayed two weeks before. The stitches from the spaying were still in place. The vet called the owner, who, according to the vet, sounded annoyed at being awaken at 12 noon on a Sunday. She told him that his dog had been hit by a car, and that a few “good Samaritans” offered to give it the care it required, but legally could not do so without his permission. The owner said he didn’t want the dog anymore. When I asked the vet for the owner’s name, she refused to give it to me.

Since this clinic was emergency-only, we had to pick the dog up at 7 the following morning. The receptionist handed us the helpless patient, and also gave us a file that included information from the microchip scan. Among other stats in the file was the abominable owner’s name and address. But more about this character later. DeGuerre and I brought the poor dog to the amazing Dr. Cane in Hillsdale, New York.

Dr. Cane took one look at the beagle, now named “Lilybelle,” and said she was in shock, had a fever, and was close to death. Cane, like the previous vet, felt Lily’s hind leg would have to be removed. But after countless surgeries and thousands of stitches, he saved not only Lily’s life, but her leg, too.

Lily stayed at Cane’s clinic for two weeks. During this time I spoke with the previous owner’s neighbors. They told me he kept the dog on a rope in his tiny, fenced yard all day and all night. When he tired of her (perhaps she refused to fetch his slippers), he removed her collar, opened the gate, and just “let her go.”

Lily made a remarkable recovery. Two months after leaving Cane’s care, we watched with joy as she out-ran pit-bulls, golden retrievers, and other dogs three times her size at a local dog-run. She also started sleeping in our bed, contentedly cuddled by Mr. Fox and me all night long. Does your dog sleep with you, too? It’s a wonderful feeling.

I’m telling you this Lilybelle story because I’m very concerned for her now. I have no idea what the nature of her injury might be. Dr. Cane said it could be a dislocated joint, or maybe Lyme-disease or some other serious issue. But we will do whatever we can to make her well again. Prior to finding us, she had a very rough life. But she is our little child now, and we love her to pieces.

Update 3/05/10: Dr. Cane called and said Lily is up and “perky.” He said, “Kevin, I know I’ll have to release this dog tonight, or endure your wrath. And frankly I’m not that strong.” Thus, after two nights in hospital, our girl is on her way home!!!

When to Start Annuals Indoors
Prima Donnas in March