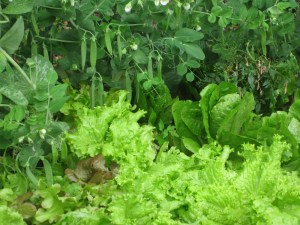 EGADS…another lettuce recall has been announced. According to the Food & Drug Administration, 23 states, including New York, have received bagged lettuce tainted with E-coli. Read the following report, and then let me know if you will ever eat bagged salad again:

WASHINGTON — Lettuce sold to retailers in 23 states and the District of Columbia has been recalled because of a possible link to 19 cases of E. coli.

Freshway Foods of Sidney, Ohio, announced on Thursday a recall of romaine lettuce after illnesses were reported in Michigan, Ohio and New York. The Food and Drug Administration said the illnesses included 12 people who have been hospitalized and three with potentially life-threatening symptoms.

The New York state Public Health Laboratory in Albany discovered the contamination in a bag of Freshway Foods shredded romaine lettuce on Wednesday, according to the FDA.

That bag of lettuce came from a processing facility that was also linked to the illnesses, the FDA said. The agency would not release the name of that facility or its location but said an investigation was under way.

E. coli infection can cause mild diarrhea or more severe complications, including kidney damage. The three patients with life-threatening symptoms were diagnosed with hemolytic uremic syndrome, which can cause bleeding in the brain or kidneys.

The affected lettuce has a “best if used by” date of May 12 or earlier. The recall also affects “grab and go” salads sold at Kroger, Giant Eagle, Ingles Markets and Marsh grocery stores.

What can we do to avoid contaminated lettuce? Well, we can eat only what we grow. Failing that, we can purchase our produce from a local greenhouse or food co-op. And when ordering salad at a restaurant or deli, we can ask where the lettuce came from. Personally, I’m going to do just that, even if the waiter gives me a funny look. For I suspect that most restaurants (and probably all delis) buy their lettuce bagged, and from a source located at least 1,500 miles away. Such produce I will not eat. What about you?