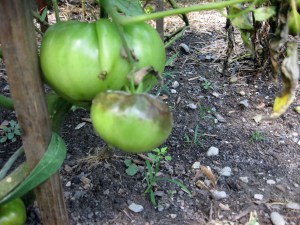 What are the dark spots on my tomatoes? Late blight, that’s what. And this fungal phenomenon isn’t “late” this year, but very early…

Dan Barber, in his New York Times op-ed, “You Say Tomato, I Say Agricultural Disaster” (August 8, 2009),discusses late blight, and explains how and why it is rapidly spreading throughout the Northeast. Among other things, he notes the danger of buying starter tomato plants from big box stores like WalMart and Home Depot. You see, such outlets buy their tomatoes from a single grower in the south. Just one plant, if it carries a fungus, soon infects the entire bunch at the big box garden center. And spores from a single diseased plant can quickly spread through entire neighborhoods.

Consequently, it is wise to either start your own plants from seeds, or purchase seedlings from a small, local grower. (You might wish to avoid heirloom varieties, too. They do not possess the disease-resistance of modern types.)

Copper sprays — the traditional method of preventing late blight — have proven largely ineffective in the Northeast this year. Why? Because the fungus thrives in the type of weather we’ve endured throughout the summer of 2009: wet, humid, and cool.

My plan is to harvest — post haste — the remaining blight-free tomatoes in my garden. I’ll use a number of them to make my fabulous Fried Green Tomatoes. Others, after ripening on my kitchen counter, will be frozen or turned into sauce. Then the vines will be destroyed, and in their place will go fast-growing crops of Swiss Chard, beets, beans and lettuce.

Has late blight found its way to your tomatoes, too?

Why miss anything at A Garden for the House? Sign up for my weekly newsletter.