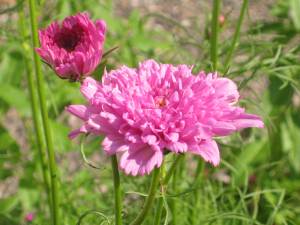 LAST YEAR, Renee Shephard of Renee’s Garden Seeds sent me a trial packet of a new, fully double Cosmos called ‘Rose Bon Bon.’ Would you like to know my honest assessment of this plant that was bred in France for the cut-flower trade? 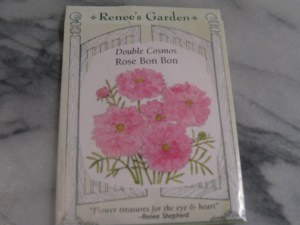 First, let me tell you that I ignored the planting-directions which came with the seeds. I did not wait to plant them “after all danger of frost has past.” Instead, 12 seeds were winter-sown in a milk jug in early March, when nights were consistently below freezing. Even after the seeds germinated they were not bothered by frost. Thus I ended up with 12 healthy plants to set out in mid-May. 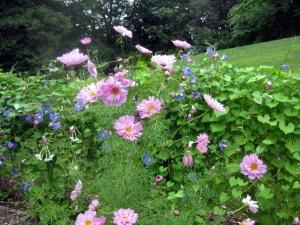 The lustrous, rosey-pink coloring of Bon Bon turned out to be strong enough to catch the eye, but pastel enough to harmonize pleasantly in a choir of other brightly-hued plants. I placed four in front of the wall of ‘Heavenly Blue’ morning glories in my herb garden (above), and considered the effect fantastic. 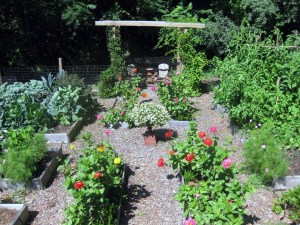 I tried them in my Kitchen Garden too. There, set at the end of two raised beds (in the photo above they are located on either side of the two front zinnia beds) the peony-like flowers attracted bees and butterflies just as I hoped they would. 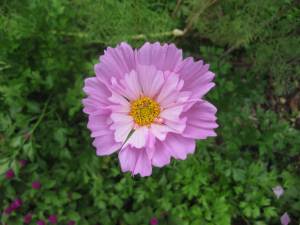 In both locations the plants bloomed and bloomed from late spring through the first hard frost. True, some of the flowers were not so peony-like as others, as you can see from the photo up top. But all were beautiful.

How they stand up as cut flowers I haven’t a clue. You see, I have little need for flowers in the house during summer. With so many gardens and outdoor seating arrangements here, we rarely entertain indoors during the warm weather months.

In the final analysis, I’d say that if you want a delightful splash of pink in your garden, one that is easily achieved, Cosmos double Bon Bon is definitely the plant for you. Give it average soil and moderate water and it will flourish almost too well.

The only downside is that plants require staking. Unlike tall single cosmos I’ve grown, Bon Bon’s stems bend and break during summer storms and heavy wind. If a broken stem is left on the ground, it quickly grows roots in an effort to produce a new plant. This isn’t a bad thing, especially if you desire a fresh crop of pink which can be transplanted to another part of your garden.

Related Posts:
Winter-Sowing 101
The Chocolate Flower
Welcome to My Herb Garden
A Walk in the Kitchen Garden
Nicotiana for Evening Perfume

The Creamy Contrarian
Freesia at Last!