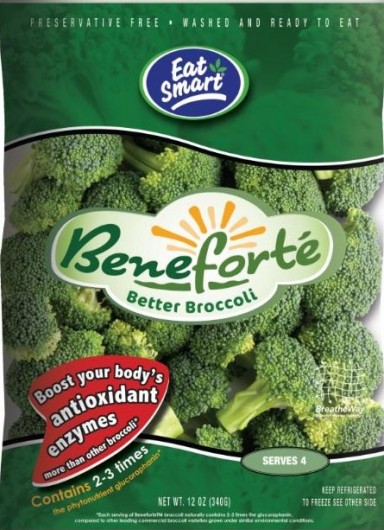 COMING TO A PRODUCE AISLE NEAR YOU, and conveniently pre-packaged and ready-to-eat, is ‘Beneforte’ broccoli. As you can see in the photo up top, the package is labeled with a number of health claims. But when you realize what’s missing from the bag, you’ll probably gag. I know I did. For Beneforte is the product of the agricultural Goliath I like the least. It is the product of Monsanto. 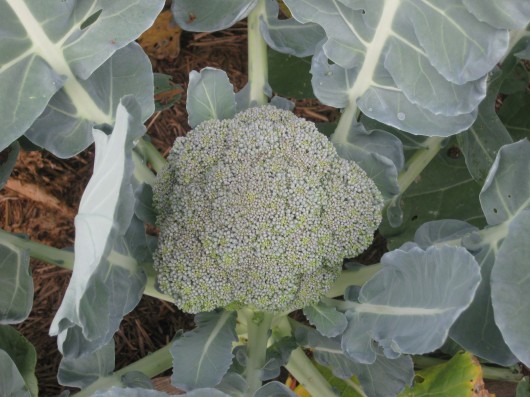 To be clear, there is nothing inherently wrong with ‘Beneforte.’ It is not a genetically modified vegetable, but a cross between a commercial broccoli and a wild broccoli. (More details: see comment #25 beow.)

What gets my goat is Monsanto’s claim that ‘Beneforte’ helps to “maintain your body’s defenses against the damage of environmental pollutants and free radicals.” Now that’s a howler. For Monsanto is one of the biggest polluters of the environment. Have a look at their track record, which includes the company’s introduction of Agent Orange:

Well. Is it any wonder that Monsanto doesn’t want its name emblazoned on packages of ‘Beneforte’ broccoli?

Folks, if you look at the recipes here at A Garden for the House, you will quickly discover that I am not a food-prude. My goal with this article is simply to warn those of you who might be avoiding Monsanto products to watch out for ‘Beneforte’ broccoli. The pre-packaged product is currently available at supermarkets in California, Texas, Georgia and Minnesota. It will, I presume, reach Northeastern shops before long.

Related Posts:
Forewarned is Forearmed: Veggies Owned by Monsanto
Keep Monsanto OUT of Your Veggie Patch
Got Weeds? Use Vinegar, Not Round-up