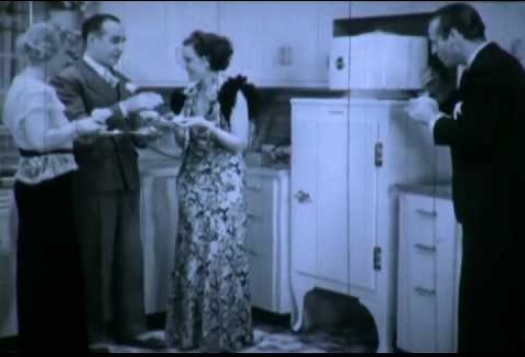 Eighty years ago, before the television became ubiquitous, kitchen appliance manufacturers routinely advertised their wares in movie theaters. I watched several of these “shorts” on YouTube recently, and discovered that kitchens of the 1930s and 40s were, in certain respects, even nicer than the kitchens of today.

Note: These films are definitely sexist.  Nevertheless, since I’m presently re-designing a portion of my own kitchen, I found the films to be both fun and useful.

Here’s a series of short commercials from General Electric. Who doesn’t want a top-loading dishwasher that cleans and rinses in just 5 minutes? And check out the refrigerator that opens with the touch of a toe!

And here are several examples of beautiful, high-efficiency kitchens. I love the “thrifty deep-well cooker” at 13:03.

The “perfect” kitchen, as designed by the U.S. Department of Agriculture. Get a load of the revolving corner shelves, vertical “files” for baking pans, and  built-in bins for flour and sugar.

And here is a push-button stove with a built in pressure cooker. The cooker easily converted to an extra surface unit, as described at the 10:18 mark. Do watch the entire video. It’s a hoot!

See any 1930s and 40s appliances or design features you’d want for your own kitchen? Want the frilly party dress the hostess is wearing in the first video? Talk to me in the comments field below.