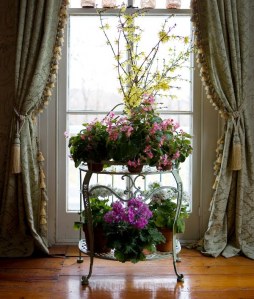 A VASE OF GLOWING, GOLDEN FORSYTHIA is just the thing to alleviate winter dullness in the house. You can cut the branches in late December or early January, and they will bloom for you just 2 or 3 weeks later. And other common garden shrubs can be forced as easily. Of course the branches will look dead at first, but the flowers are there, just waiting for the warmth and light your windows can provide. Here’s my incredibly fun forcing routine: 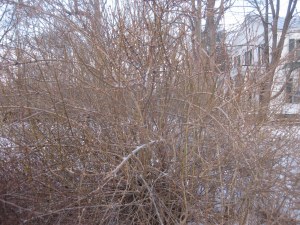 No matter how frigid the weather might be, go out with sharp pruners and gather forsythia bouquets. I clip mine from the big shrub in my front yard (above). Choose branches of varying lengths and shapes for the best sculptural effect. 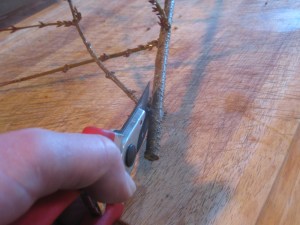 Indoors, cut your material to attractive bouquet lengths. Then smash the ends with a hammer, and set them in a bucket of warm water. A one-hour soak is all it takes to hydrate the branches and snap them out of dormancy.

After soaking, arrange the branches in a vase of warm water, to which a few drops of liquid bleach has been added. My forsythia goes in the sun on the parlor plant-stand. There, as you can see from the very top photo (which was snapped by Patrick Harbron), the gold-trussed stems look cheerful in conjunction with pots of pink wax begonias and fragrant purple and white Primula malacoides. Ah, such beauty achieved for no cost at all.

And here is a list of other branches that will give you early indoor color. The suggestions for timing are based on my own, zone 5-b experience:

If I were you, I’d go collect an armful of “dead” twigs today. For these, in very short order, will produce for you an extraordinary spring portrait.

Related Posts:
Apple Blossoms in February
A Winter Fling with Primroses
Snowdrops – A Prelude to Spring
How to Force Freesia Bulbs
Flowering Bulbs for Winter Windows