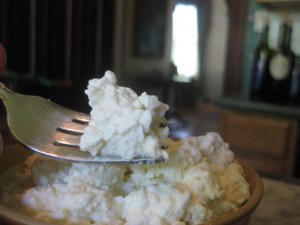 MMMMM…take a bite of homemade cottage cheese, and you’ll think you’re eating a cloud. It’s light. It’s fluffy. It’s the kind of thing I like to fold into pancake batter for breakfast, or to serve with blueberries for dessert. You won’t believe how easy it is to make this ambrosia, or how self-reliant you’ll feel after you’ve made it:

Now, before I get to the recipe, let me explain that this version of cottage cheese is nothing like the heavy, watery, tartly-acidic cottage cheese that American supermarkets sell. In fact, according to food-writer David Lebovitz, it’s the equivalent of the cottage cheese that Parisian shops offer. David lives in Paris, so I’ll take him at his word.

Special equipment – a non-reactive, heavy bottomed pot with a lid (I used my 2-quart Le Creuset pot); a thermometer; a piece of butter-muslin* or cheese-cloth for draining the curds; a slotted spoon; a tea towel

*You can buy, as I did, both the liquid rennet and the butter-muslim here. Neither item is expensive. 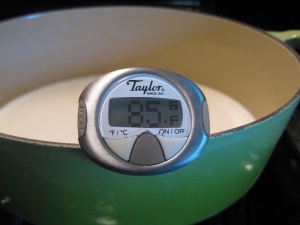 Heat the milk to 85 degrees over a very low flame. (Keep an eye on both pot and thermometer — the milk will reach the proper temperature in only a minute or two.) Remove from heat. 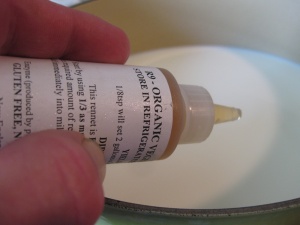 Add 4 drops of liquid rennet. Stir with the slotted spoon for 2 minutes. 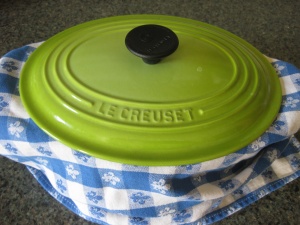 Drape the tea towel over the pot, then put the cover on. Let sit at room temperature for 4 hours. If your kitchen is cold — say, below 72 degrees — wrap a big bath towel around the pot as insulation.

After 4 hours the mixture will resemble a soft custard. Using a knife, cut the mixture criss-cross into one-inch squares. 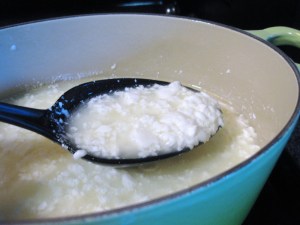 Set the pot once again over very low heat, sprinkle on the salt, and gently stir for 2 minutes, or until the curds separate from the whey. Do not overheat, or your curds will be tough.

Line a colander with the butter-muslin or cheese-cloth, then set the colander into a large bowl. Pour in the curds, and gently stir to help drain the whey. Empty the bowl once or twice so the curds are not sitting in the drained whey.

Fold the butter-muslin over the cheese, and set the colander (still in the bowl) in the refrigerator. Let chill for an hour or more, stirring once or twice to encourage further draining. 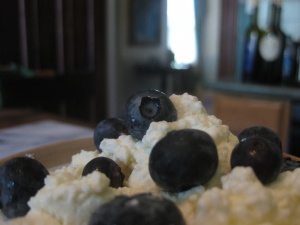 Pour the curds into a bowl, add the heavy cream, and stir with a fork, breaking up the curds as you work. Taste; add more salt if you like.