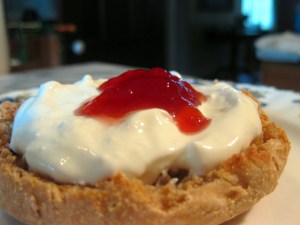 IF YOU ONLY KNOW BLAND, STORE-BOUGHT CREAM CHEESE (which, by the way, is artificially thickened with guar gum, locust bean gum, and modified food starch), get ready for a treat. The homemade version, which I made several times this week, is rich, tangy, and utterly pure. Even an 8-year-old child can make it. Yes…it’s that easy: 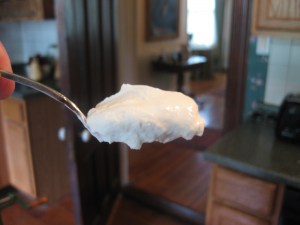 I made this cheese two different ways: with ultra-pasteurized half & half (this made a very white, tangy cheese); and another, with one quart each of local, whole milk and heavy, pasteurized creme. This last batch, which I preferred, had a creamy-yellow hue, possessed slightly less tang, and had an irresistibly-rich edge. I’ll let you decide which way to go.

Homemade Cream Cheese
Ingredients for about one pound of cheese
2 quarts half & half (pasteurized and “ultra-pasteurized” will both work)
1 packet direct-set mesophilic starter*
Optional: salt
Optional: herbs or jam

Special Equipment – a glass bowl that will hold at least two quarts; a colander; a wire whisk; a sheet of plastic wrap to cover the bowl; a large piece of butter-muslin*

*You can obtain, as I did, 5 packets of direct-set mesophilic starter and also the large piece of butter-muslin from The New England Cheesemaking Company. Each costs $5.95. The muslin, which is used for draining all kinds of soft cheeses, can be used again and again.

1. Pour the half & half into the glass bowl, cover with plastic wrap, and let sit for several hours, or until it comes to room-temperature: 72 degrees. (If patience isn’t one of your virtues — it isn’t one of mine — set the bowl in the microwave, and heat it on high for exactly 60 seconds. Check the temperature with a thermometer; if it hasn’t reached 72 degrees, microwave again for 15-30 seconds, or until the proper temperature is achieved.) 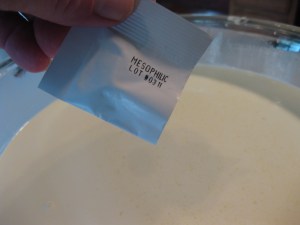 2. Sprinkle the starter over the half & half, and let it rehydrate for 2 minutes. Then vigorously whisk it into the liquid.

3. Cover the bowl again with plastic wrap, and let it sit for 12 hours. A softly-solid curd will form. 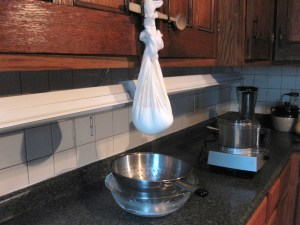 4. Line the colander with butter muslin and then pour in the curds. Tie the corners of the muslin into a knot, and let the curds drain for 12 hours, or until the bag stops dripping. (If you change the bag once or twice, it will speed up the draining-time.) Ignore my lousy knot-tying in the photo above.

5. Pour the cheese into a bowl. Then either transfer to a big plastic tub, or several small tubs. The small tubs are nice, because you can add different ingredients to each — a tablespoon of chopped chives to one, a dollop of strawberry jam to another, and so on, to create your own unique-boutique blends.

6. Cover and refrigerate for up to 2 weeks. The cheese will quickly firm up after only a few hours under refrigeration. 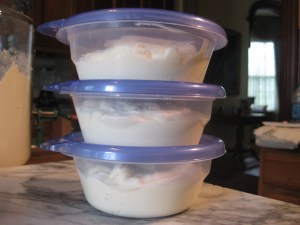 WARNING: Like other recipes here at A Garden for the House, this homemade cream cheese is highly addictive. I found myself eating it by the spoonful. And that’s something I would never think to do with Kraft’s “Philadelphia” or any other commercial cream cheese. You will probably want to spread your homemade cheese on a bagel, an English muffin, or on some of these exquisite English Cream Scones.

Coaxing Pepper Plants to Bloom
How Do You Deal with Critters?