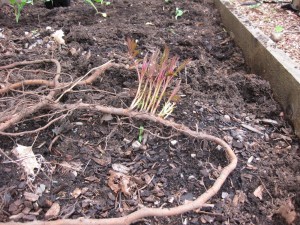 ARE YOU WAGING WAR WITH AN INVASIVE PLANT, TOO? My nemesis du jour is wild sumac (Rhus glabra). Just last week, I removed a grove of this vengeful bully from an area near my Kitchen Garden. It retaliated — and how! — by sending scores of tenacious tentacles under a fence and into my veggie plot. These sprouted a multitude of new weeds. Pictured up top are just some of the sprouted roots I pulled from one of my raised veggie beds. 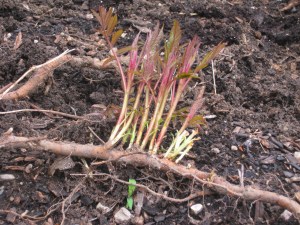 If you type “eradicate sumac” into Google’s search box, you’ll turn up numerous recommendations for Roundup. This herbicide I will not use. First, glyphosate — the active ingredient in Roundup — doesn’t biodegrade. Why would I want it near my source of food? Furthermore, I refuse to hand over money to its evil manufacturer. Instead, I’ll opt for vigilance, and promptly remove any and all sprouts that appear. Deprived of foliage for photosynthesis, the roots will eventually starve to death. This method works — albeit slowly — for all kinds of invasive plants.

So which garden-bully are you battling with? Is it sumac, or something else, like Garlic mustard?