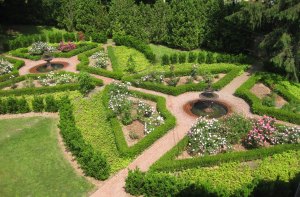 WITH DETERMINATION, even the most grievous eyesore on a property can become a sparkling jewel. My own rose garden (above, click to enlarge) is proof of this fact. Here, where fragrant flowers flourish between ribbons of boxwood, and where classical fountains play soothing music, there existed, not long ago, something quite different: 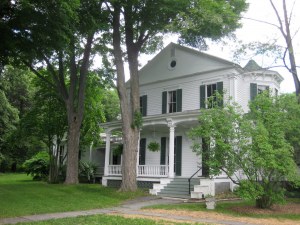 When we bought this 176-year-old house in 2002, there were no gardens here. There was, however, bang behind the house, and in the perfect, sunny spot for a garden, a parking lot. Yes, a parking lot — completely paved with asphalt. (I’d show you the “before” pictures, but alas I can not find them.) Studying the offensive view from kitchen, office, and guestroom windows, a vision of roses, evergreens and fountains began to emerge. Two years later, we hired a contractor to remove every trace of blacktop.

A friend, Roderick Blackburn, who has authored many books on historic properties, drew up a design for my vision: Two 50-foot circles framed with the upright yew, Taxus hicksii, 8 boxwood-edged, hexagonal rose beds within, and two tall, classical fountains.

You haven’t lived until you’ve tried to dig in soil that was covered, for probably 20 years, with heavy asphalt. “Compacted” doesn’t begin to describe it. I rented a post-hole digger in order to make openings in the rock-solid surface for the edging plants — 190 yews and 320 boxwoods. 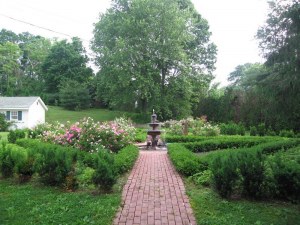 Unfortunately, after the yews were purchased, there was scarcely enough money left to buy sufficient boxwood. Consequently I bought just enough plants to roughly outline the geometric rose beds, and then tucked boxwood cuttings, clipped from the existing stock, in between. These rooted in only 6 weeks time, and within 3 years matched the stature of their parents. 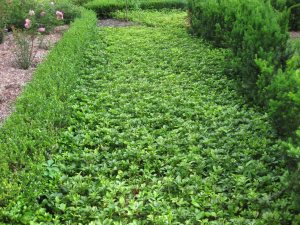 The large sweeps between the boxwood and yew beds were planted with pachysandra. True, this “shade-loving” groundcover struggled in the blazing sun and infertile soil for a few years. Now, however, it thrives. I can tell you that plentiful moisture is the key to pachysandra success, if it is to grow under long hours of direct sun. 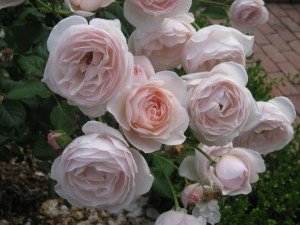 Now for the roses. I chose mostly David Austin varieties, including ‘Heritage,’ above, because of the glorious forms and fragrances they offer. A pick-axe was used to hammer out huge holes for each shrub. Then I back-filled the holes with –get this — Miracle-Gro potting mix. (Cheating, I know, but back then I didn’t have a stockpile of leaf mold.) How the roses prospered in the peaty formula their roots could easily penetrate! Since then, mountains of shredded leaves have been added to the rose beds annually, and now, 5 years later, the soil is friable, filled with worms, and very easy to dig.

I suppose the lesson of my parking-lot-to-rose-garden story is this: You can make a garden anywhere. All you need is a bold vision, a little determination, and an unflinching desire to turn an “impossible” situation into your own, special paradise of fragrance and color.

It's Time to Re-Sow the Salad Greens
Last-Minute Chores