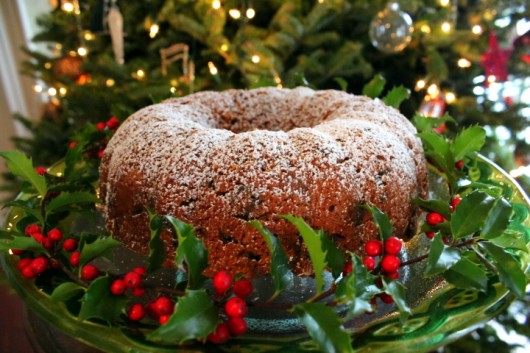 NORMALLY I’D SHY AWAY from a recipe that boasts 18 ingredients.  But when it comes to Dorie Greenspan’s Figgy Pudding, I make an exception. How I love this spicy, fruity, boozy dessert!  One bite, and you’ll understand why 19th century carolers proclaimed “We won’t go until we get some.”

Here’s the step-by-step recipe, followed by a printer-friendly, copy-and-paste version: 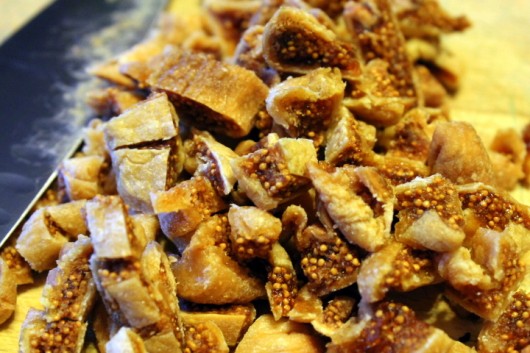 To start, dice up a dozen dried figs. 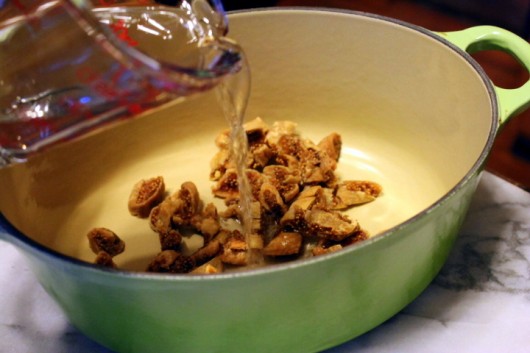 Put the figs and one 1/2 cup of water in a green sauce pot. Bring to a boil, then reduce heat, and simmer, uncovered, until most of the water has evaporated — about 5 minutes. 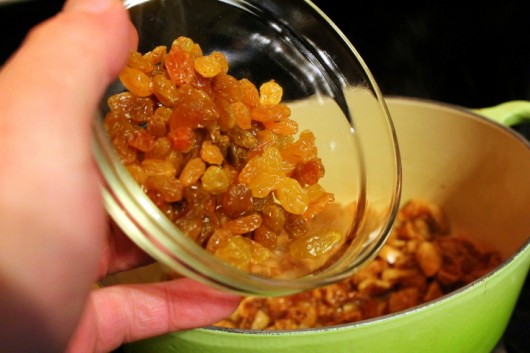 Off heat, add a big handful of raisins to the figs (I used gold raisins). 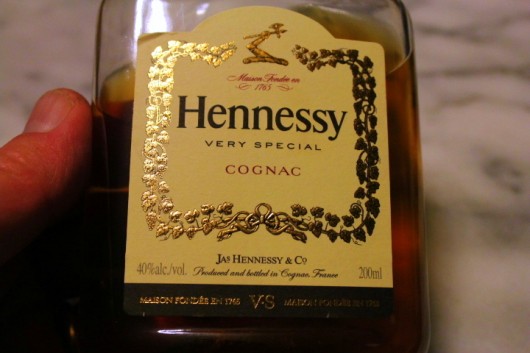 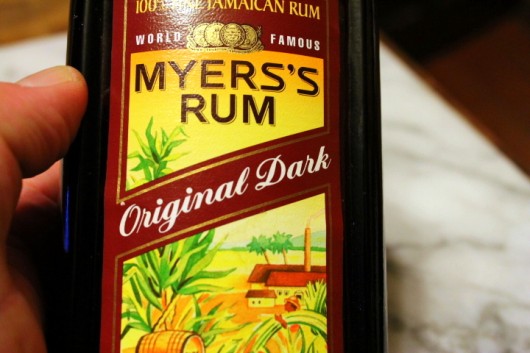 And some dark Jamaican rum.

Bring the works to a boil, and then immediately remove from the heat.

Let flame for 2 minutes. Then extinguish the flames by covering the pot.

And don’t worry — you won’t cause an explosion. The flames will rise only an inch or so above the liqueurs. 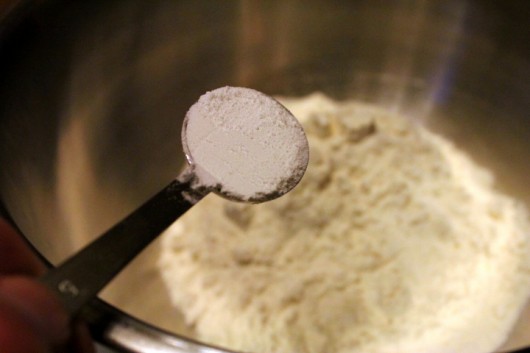 Meanwhile, in a medium-size bowl, whisk together some flour and baking powder. 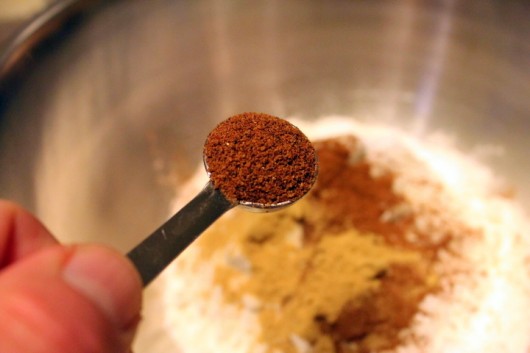 Yes, I realize salt is not a spice. It’s a mineral. Please forgive me. 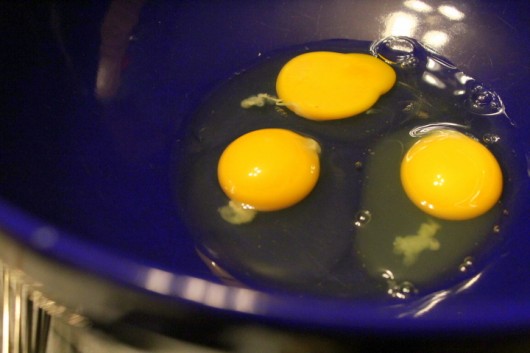 Are you still with me? Put 3 eggs in a large mixing bowl…

And beat  with a wire whisk until thoroughly combined. 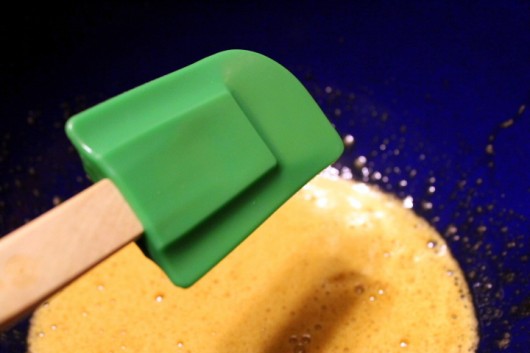 At this point, trade your wire whisk for a rubber spatula, and use it to incorporate each of the following: 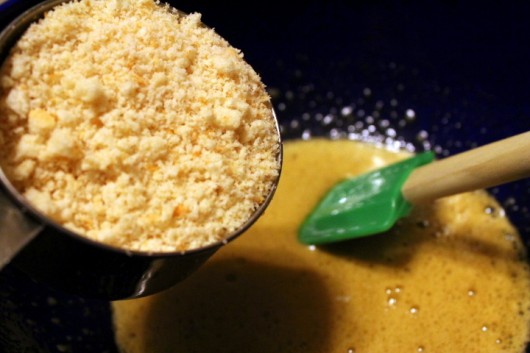 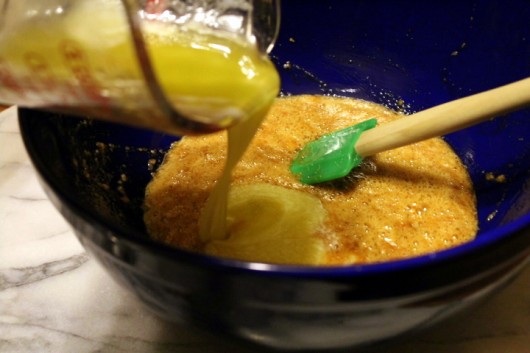 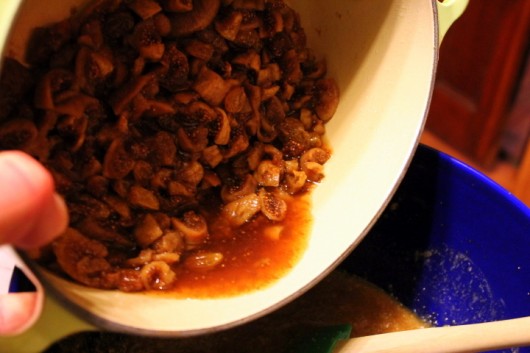 The cooked figs and raisins, and all of their luscious liquid…

And the dry ingredients.

Finally, fold in some dried cherries and cranberries. 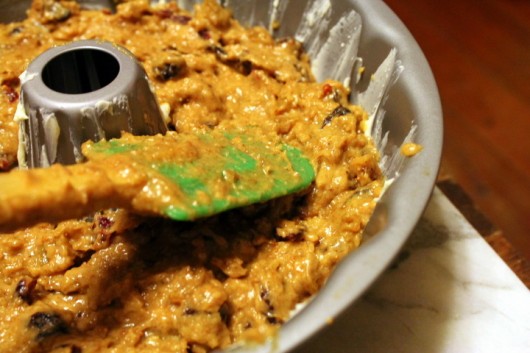 Scoop the batter into a well-buttered tube-pan; cover the pan tightly with aluminum foil. 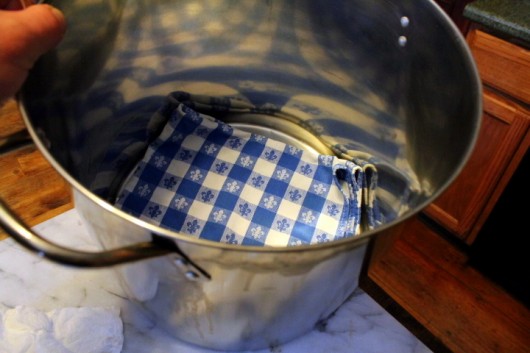 Now grab a blue and white kitchen towel, and place it in the bottom of a stock pot. The towel will keep the pudding from bouncing around as it steams.

Set the tube pan in the stock pot, and add enough hot water to reach two-thirds up the sides of the pan.

Tightly cover the stock pot with aluminum foil, and put the lid on.

Bring to a boil, then reduce heat, and let the pudding steam quietly for 2 hours.

No picture of this next step, because it’s a two-handed affair: When the pudding is done, bring the stock pot to the sink, and tip out most of the water. This will cause the tube pan to shift, so you can easily retrieve it. 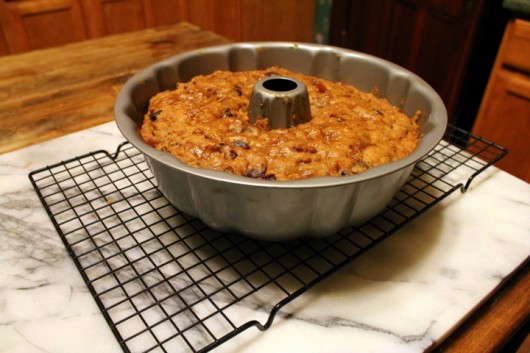 Remove the foil from the tube pan, and let the pudding cool on a wire rack for 5 minutes. 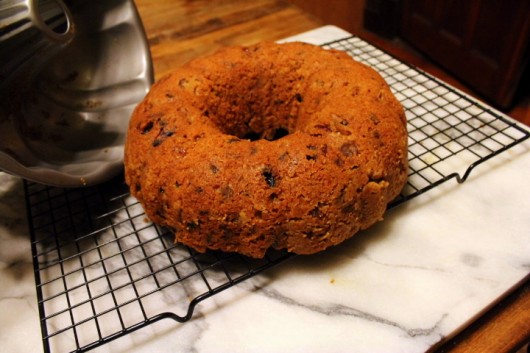 Then set the rack atop the pan, invert the two, and voila! — you’ve got Figgy Pudding!

Ahead of time note: You can make this pudding well in advance. When completely cool, wrap it in several layers of cling wrap. To reheat, remove the plastic wrapping, return the pudding to the tube pan in which it was originally baked, and and steam it in the stockpot for 45 minutes. 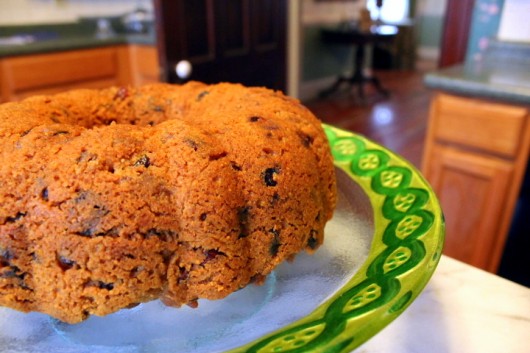 To serve, transfer the pudding to the festive cake-stand you found at the local odd-lot store… 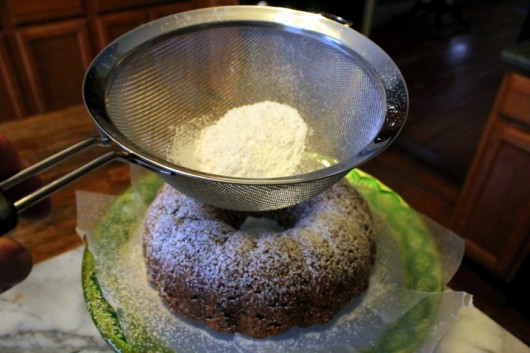 Give it a dusting of confectioners’ sugar… 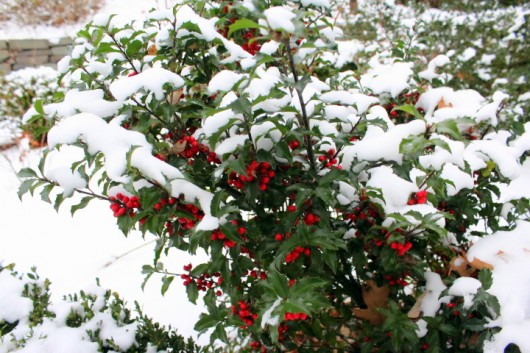 Then run outside to your snow-covered holly shrub, and clip a few sprigs. 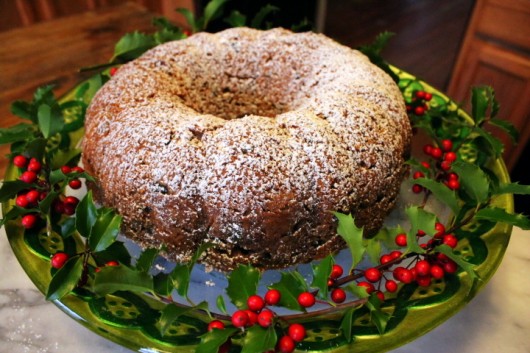 Arrange the sprigs ’round the platter. 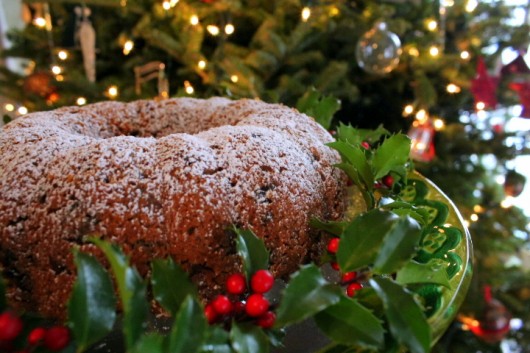 Then take pictures of the pudding in front of your Christmas tree.

Now, I would dearly love to serve you a slice of this moist and fragrant deliciousness. But I can’t. You see, I have to save it for a dinner party I’m hosting on Saturday night. For the grand finale, I’ll pour some warmed cognac over the dessert, and flame it at the table. Because that’s what any sensible drama-queen would do.

And here’s a printer-friendly version of the above recipe:

1. Put the chopped figs and 1/2 cup of water in the saucepan; bring to a boil. Reduce heat and simmer, uncovered, for about 5 minutes, or until much of the water has evaporated.

2. Add the cognac, the rum, and the raisins to the figs. Bring to a boil, then immediately remove from heat. Ignite the liquid with a match, and let it flame for 2 minutes. Then extinguish the flames by covering the pot.

3. Using either a whisk or a food processor, blend together the flour, baking powder, cinnamon, ginger, nutmeg, cloves and salt; set aside.

4. By hand or with the help of an electric mixer, beat the eggs and brown sugar until they are thoroughly blended. Then use a rubber spatula to incorporate first the bread crumbs, then the melted butter, then the fig mixture and all of its liquid, then the dry ingredients from step 3. Finally, fold in the cherries and cranberries.

6. Remove lid and foil from the stockpot, and bring the pot to the kitchen sink. Tilt the pot to pour off most of the water; tilting will cause the tube pan to sit upright along the long side of the stockpot, thus making it easy to retrieve. Set the pudding on a wire rack, remove its foil seal, and let cool for 5 minutes.

7. Run a plastic knife between pudding and tube pan. To unmold, place the wire rack over the tube pan and invert the two. Let cool at least 30 minutes before serving.

8. To flame the pudding, gently heat (do not boil) 1/3 cup of cognac in a saucepan. Pour the liqueur over the pudding, then ignite with a match. The flames will die out within seconds.

My taste-tester and I enjoyed this pudding with no accompaniment whatsoever. You, however, might like to serve it with whipped cream or ice cream.