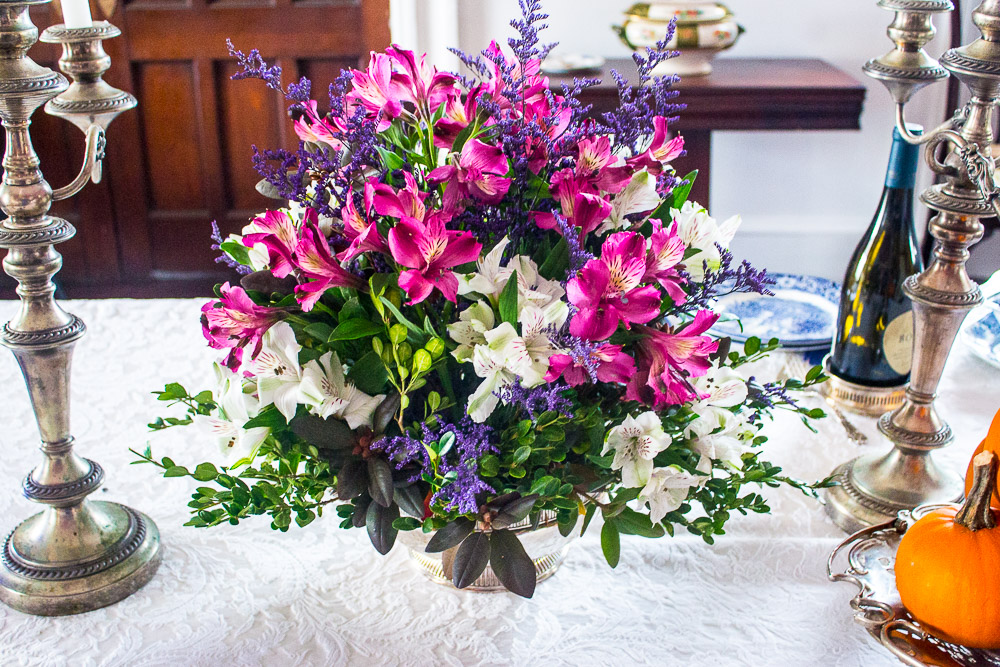 BREAKING NEWS: Yours truly is hosting an online lifestyle series called “Delicious Living.” The videos are being shot right here at Clover Hill, my home in New York’s Hudson Valley. Yesterday, we spent several hours in the dining room, filming the series’ opening sequence, or “B-Roll.” In between takes, I managed to photograph some scenes from the shoot. Would you like to see them? 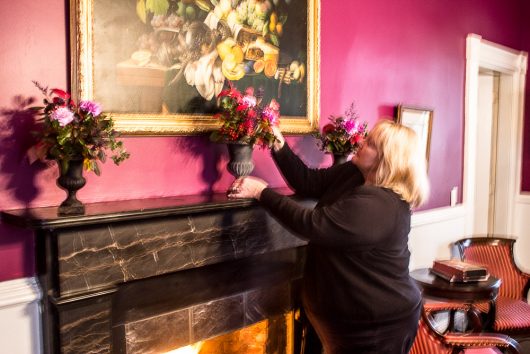 Sue Chiafullo is producing the series. That’s Sue in the photo above, putting the finishing touches on some flowers she arranged for the dining room mantel. 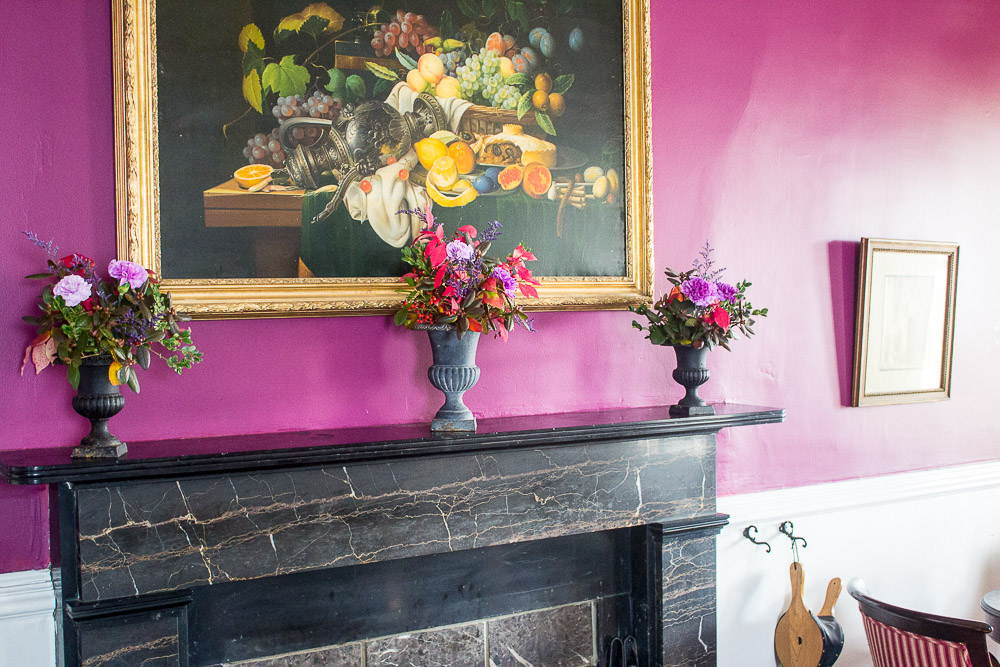 We placed the mantel arrangements in a trio of small cast-iron urns. The flowers echo those that were used for the dining table centerpiece.

The centerpiece in question. It’s composed of pink and white Alstroemeria, purple statice, and boxwood. 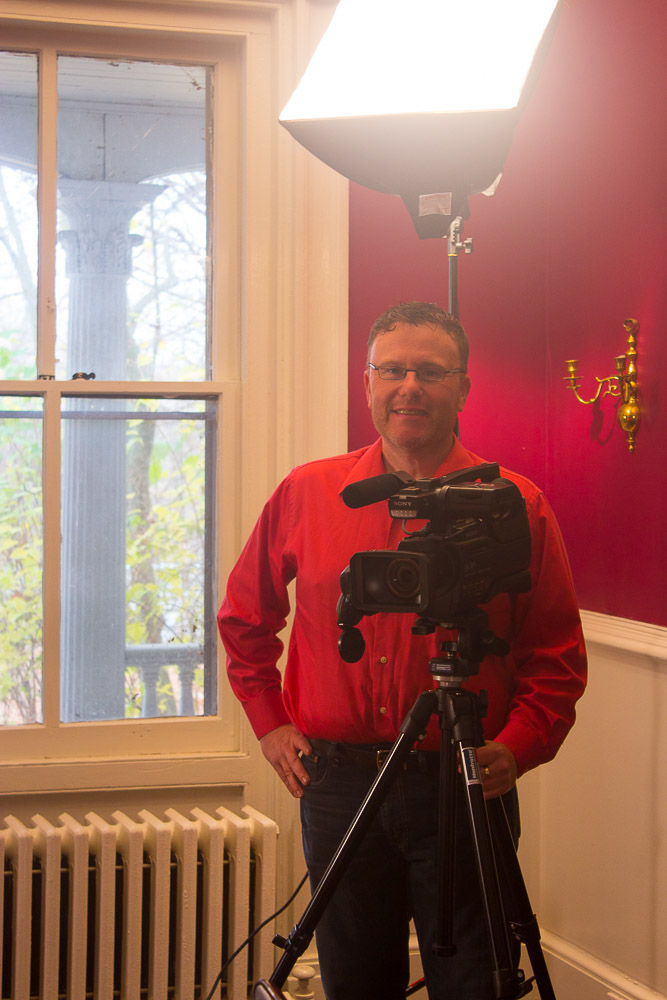 And here’s Dale Himelrick, the amazing videographer. Because the room is naturally dark, Dale set up several reflectors and a couple of brilliant white lights. 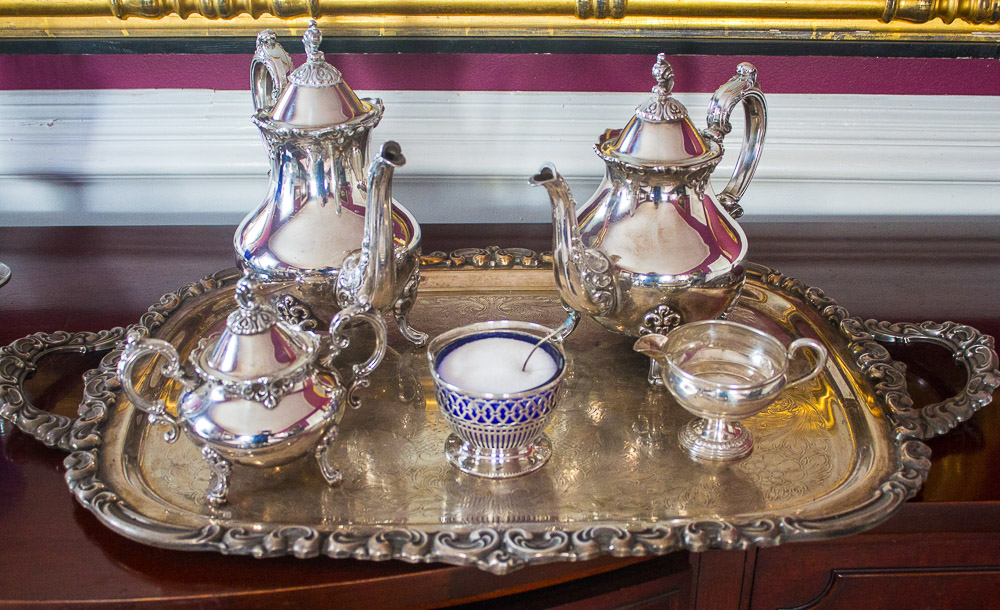 Even my 19th-century silver service got into the act. I cleaned and buffed the set last night, while also binge-watching a creepy TV series called “The Returned.” Too bad the series was cancelled after just one season. It’s addicting!

After the opening montage was shot, filming commenced to the kitchen. This meant more lights, more reflectors, and two cameras. One camera focused on yours truly, while the other one zoomed in on my hands while I sliced, diced, sifted, and stirred. We managed to shoot two cooking episodes today. 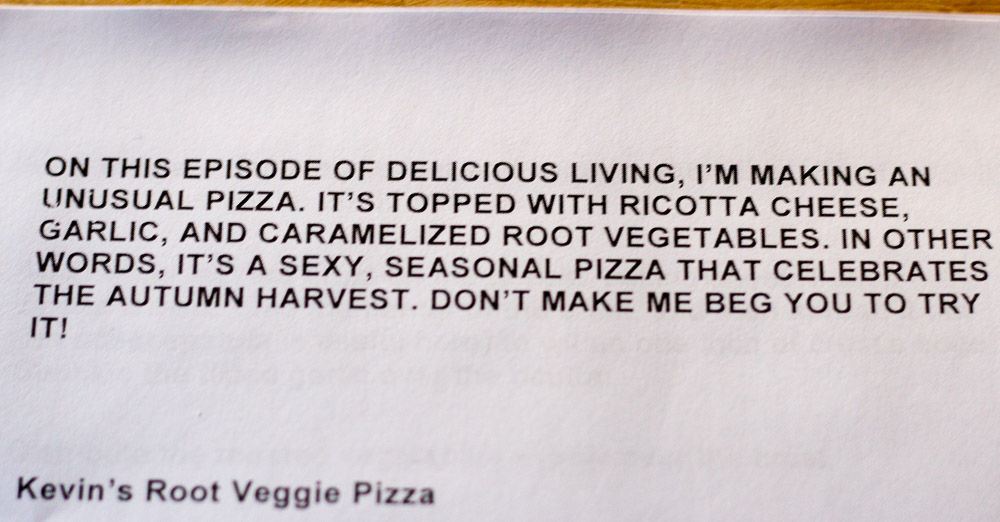 On Sunday, we’ll film 4 more cooking episodes. Pictured above is the introduction to one of the recipes.

Besides cooking, other episodes (assuming we get to shoot them!) will feature certain lifestyle topics. For instance, I’d like to show you how to light a fire in a 19th-century fireplace. And how to polish old silver. And how to rejuvenate overgrown houseplants and display them dramatically in a window garden.

I’ll let you know when the first videos are ready to air. Hopefully each episode be of some value to you. After all, I want you to live a delicious life!