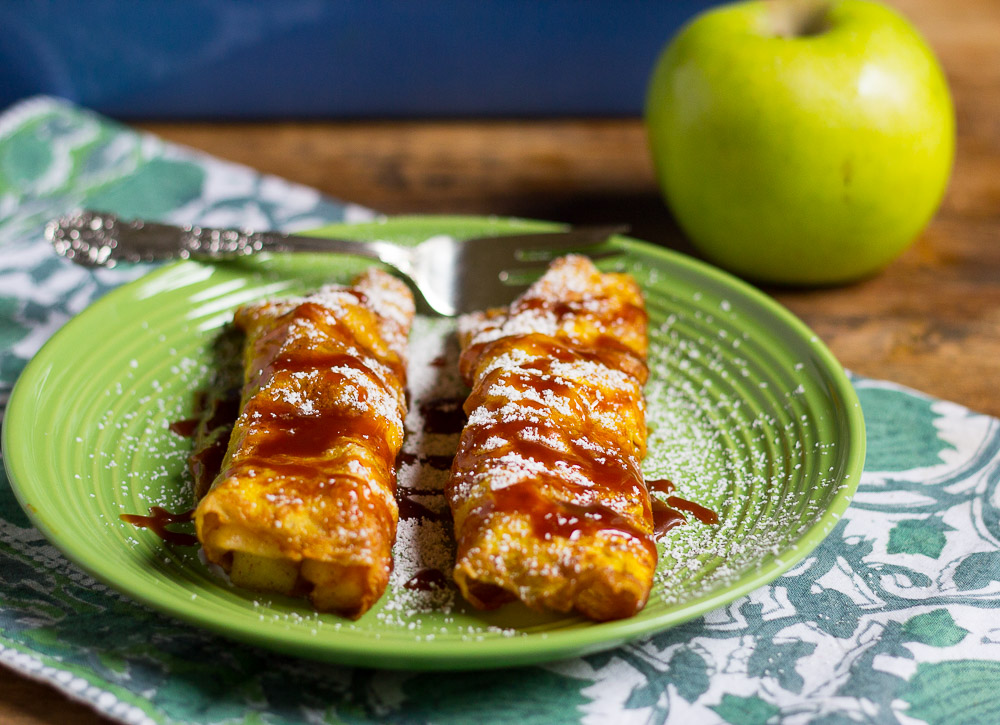 According to my psychologist-husband, couples that pick apples together tend to stay together. Okay, he actually said that “having traditions is an important component of a solid relationship.” But you get the idea. Our October tradition involves a trip to the local “U-Pick” orchard, where we unconsciously (and inevitably) gather more fruit than will fit in our refrigerator.   But that’s a good thing.  I like to invent new recipes! 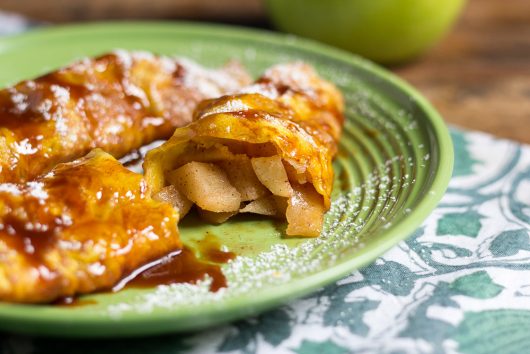 Apple overload is responsible for these too-luscious-for-words Caramel Apple Roulades. The buttery, lemony, caramel-y apples are rolled up in gluten-free egg crêpes, and then baked until crisp and fragrant. A cloud of confectioners’ sugar and a drizzle of caramel completes the picture.

Each component of this recipe, including the apple filling, the 8 egg crêpes (recipe here) and the caramel sauce (recipe here) can be made well ahead of time. Here’s the step-by-step: 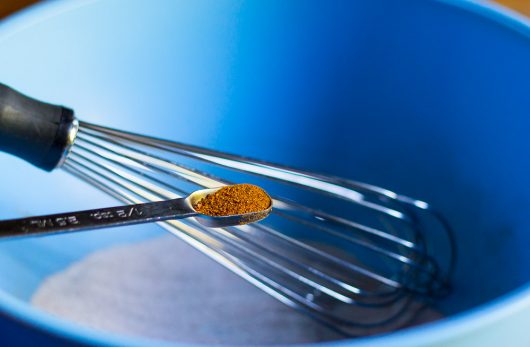 First, make the apple filling: whisk together 3 tablespoons of sugar, 1 teaspoon of cinnamon, and 1/4 teaspoon of nutmeg in a large bowl. 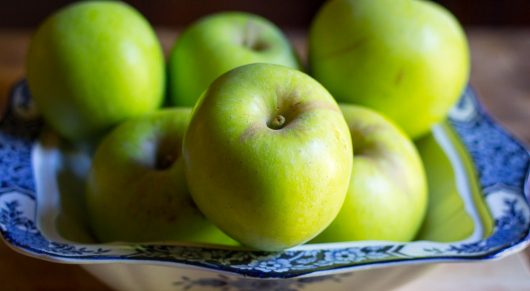 Peel and dice 2 large or 3 medium apples that will hold their shape when cooked. I used the  ‘Crispin’ variety from my local orchard.  ‘Golden Delicious’ or ‘Granny Smith’ will work as well. 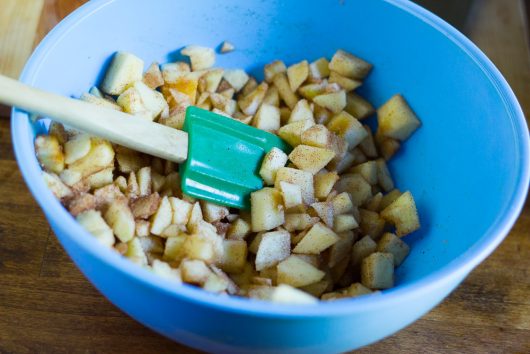 With a song in your heart, add the apples to the sugar mixture, and toss to coat. 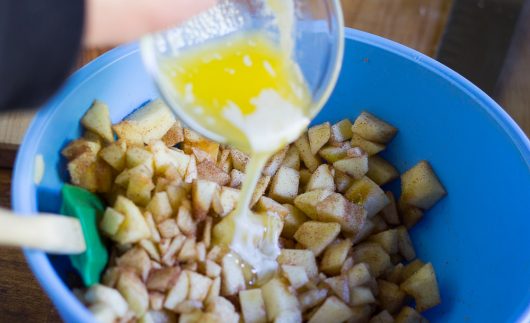 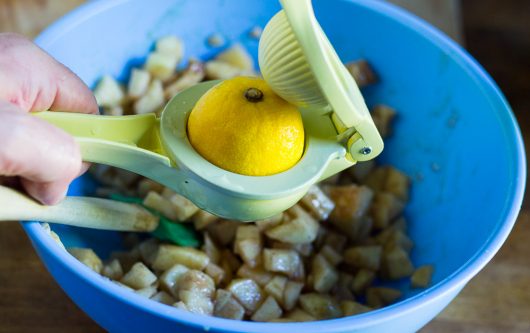 And the juice of half a lemon. Stir to coat, and then let the apples exude their juices for 15 minutes. 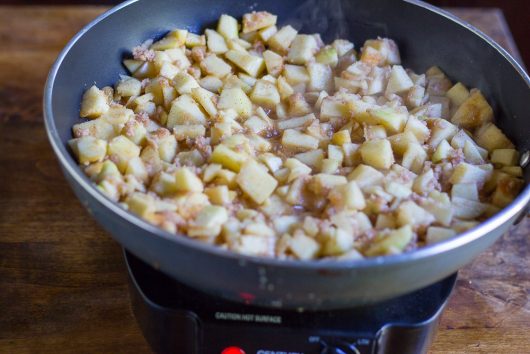 Steam the apples and their juices in a covered skillet over medium heat, tossing the apples from time to time, until they are absolutely tender — about 10 minutes. 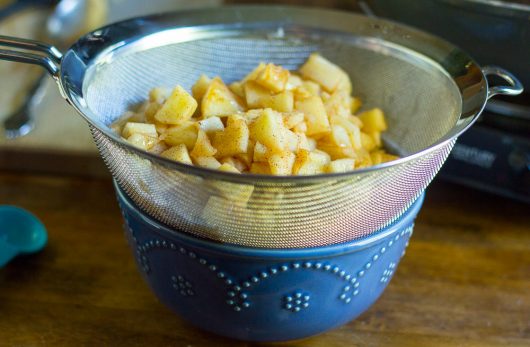 Then strain the hot apples over a pale blue bowl. 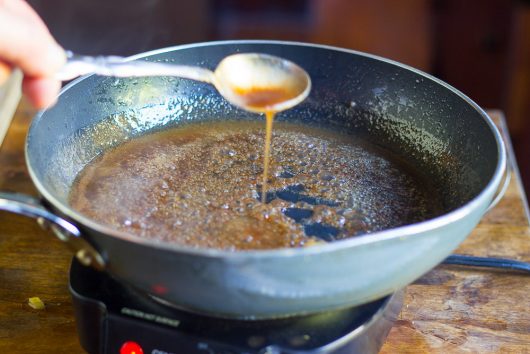 Transfer the juices from the bowl to the hot skillet, and boil them down until thick and syrupy — about 5 minutes. 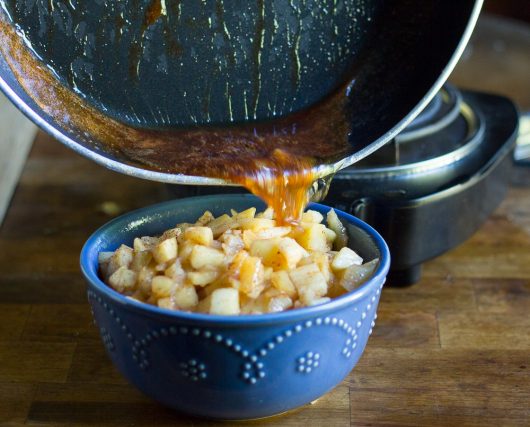 Then tip the strained apples into the bowl, and cover them with the thickened juices.

Make-ahead note: Let the apple mixture cool to room temperature. Then cover with plastic wrap and refrigerate for up to 2 days. 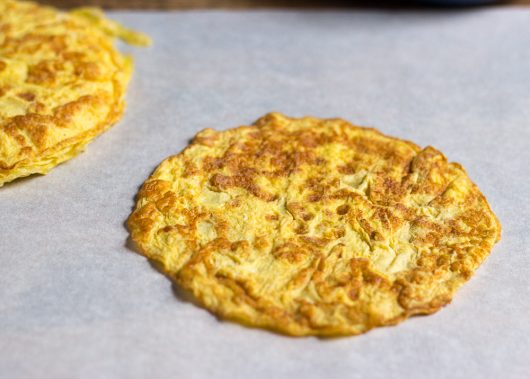 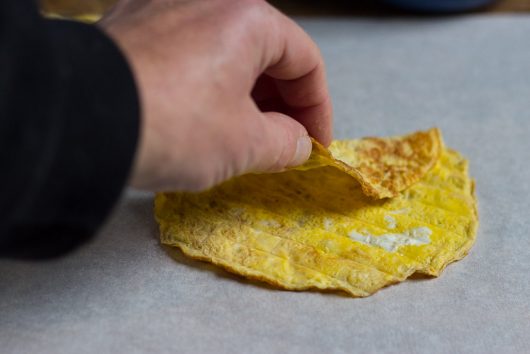 And turn it so its less-brown (“non-public”) side is facing up. 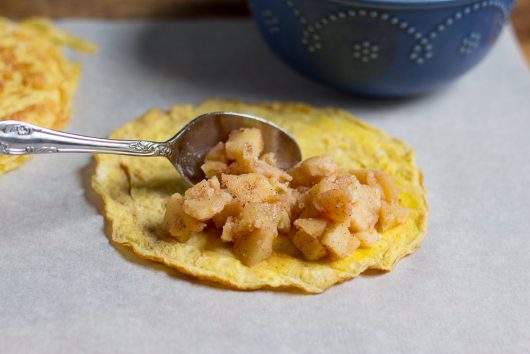 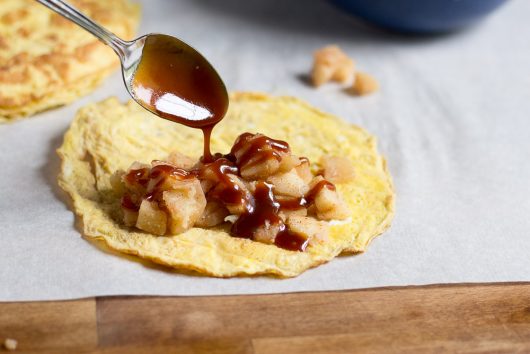 And add a small drizzle of caramel. The caramel will “glue” the apples together. 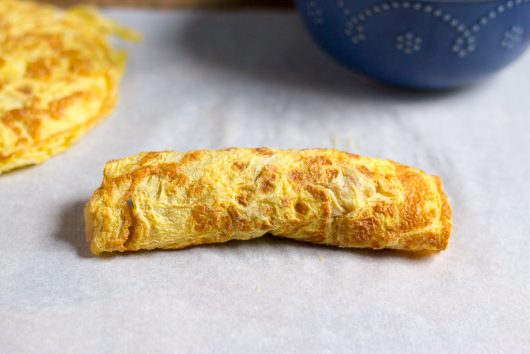 Then roll the crêpe into a cigar, or “roulade.” 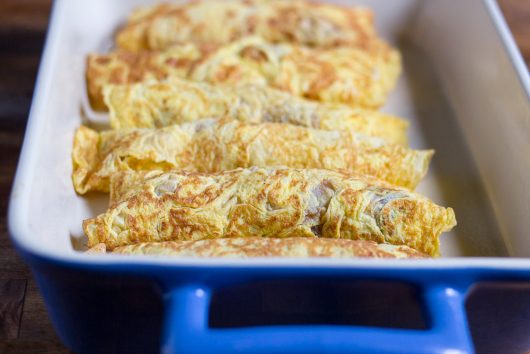 Continue filling and rolling 7 additional crêpes , placing them, as you go, in a greased 9×13 baking dish.

Make-ahead note: You can cover and refrigerate the filled crêpes for up to 24 hours. 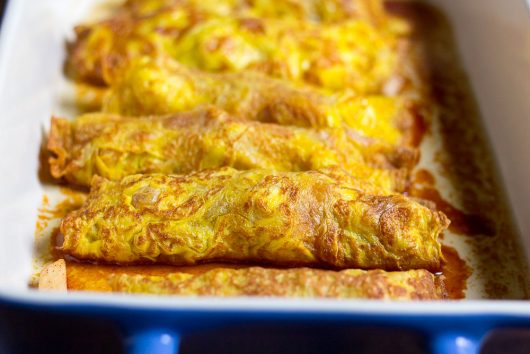 Heat the roulades in a preheated 350°F oven until they are warmed through, and the tops of the crêpes have crisped — 25-30 minutes. 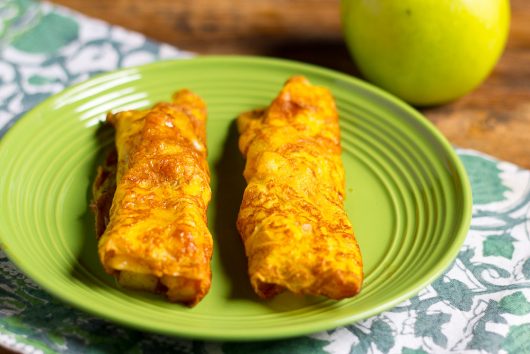 To serve, put 2 roulades on a plate… 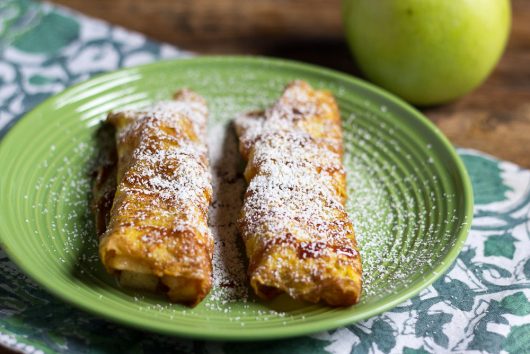 Dust them with confectioners’ sugar…

And finish them off with a generous drizzle of caramel sauce. 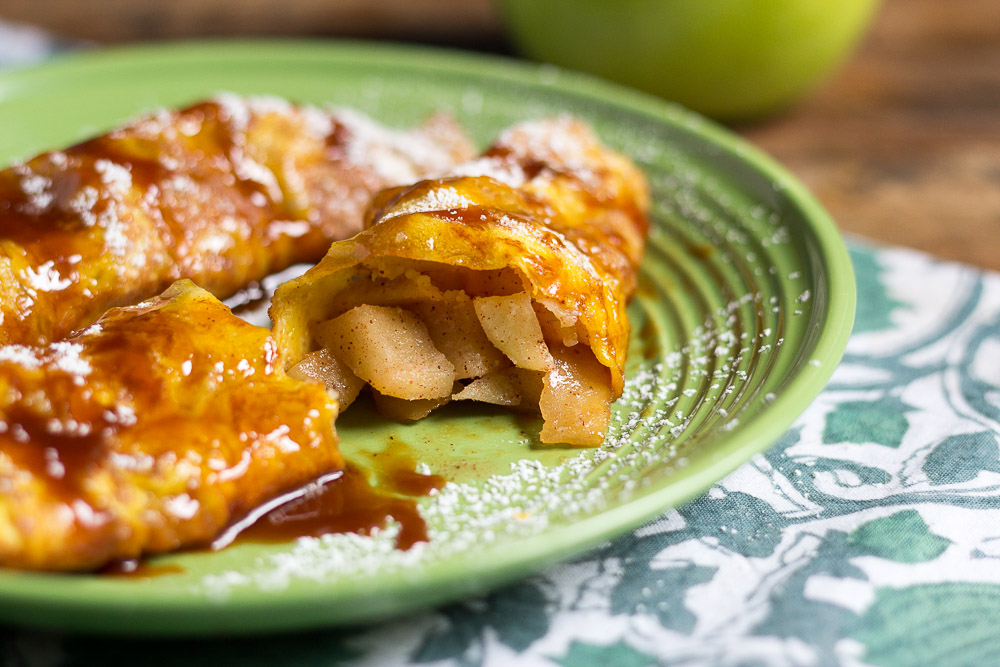 As a testament to the deliciousness of this dessert, I gave just 2 roulades to Brenda Johnson for taste-testing.  The remaining roulades disappeared into thin air.

Confession: When it comes to Caramel Apple Roulades, I have the self restraint of a grease fire.

A spectacular autumn dessert. The rolled-up egg crêpes ("roulades") are filled with a fragrant apple mixture, and topped with confectioners' sugar and caramel.

NOTES: Use apples that will hold their shape during cooking. I used 'Crispin,' but 'Granny Smith' and 'Golden Delicious' will work as well.

The recipe for egg crêpes can be found in my recipe for Rockin' Roulades (use the search box located at the top of this site).

The recipe for Homemade Salted Caramel can also be found via the search box.