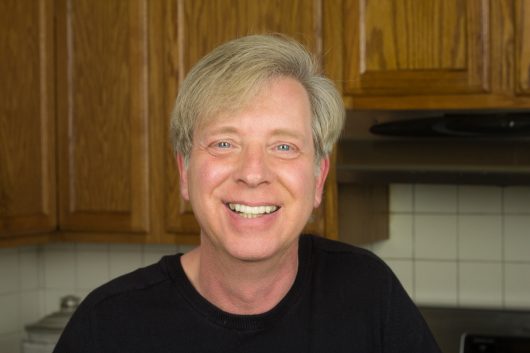 First, thanks for the comments you left on my previous post, in which I announced my upcoming cataract surgery. I had great fun reading your thoughts, prayers, and detailed accounts of your own, similar surgeries. My experience went something like this:

My dear friend David Deutsch drove me to the hospital. He also stayed in or near the hospital until I was released 5 hours later. Obviously David is a saint.

All of the hospital nurses were pleasant, except for the one who lead me to a semi-private room, and ordered me to strip. “Put all of your clothes and any jewelry in this bag,” she barked as she handed me a large plastic bag. “Then put on this hospital gown, and get into bed.” I did as I was told.

Groaning all the while, the nurse bent down and stuffed the bag that contained my pants, shoes, shirt, and feather boa onto a rack beneath the bed. Then, with a painful roar that suggested a bad back (or hip; or knees), she pulled herself upright, and asked if I needed anything. “Could I have my cell phone?” I inquired.  “Where is it?” she asked. “It’s in the bottom of the bag you just put under the bed,” I replied.

When the nurse exited the room, I was left alone with only a Twitter feed, a variety of nervous thoughts, and some audible hunger pangs. Food and water are not permitted  after midnight prior to cataract surgery.

Then came the IV that sadly pumped only saline solution into my bloodstream. I wanted the “twilight” anesthesia that so many of you told me you’d received prior to your own cataract surgery.

Next, a parade of nurses instilled a parade of numbing and dilating eye drops into my left eye. I received 22 drops over the course of just 5 minutes. Yes, I counted.

And then I was wheeled, on my bed, through a series of broad corridors.  “You’re next in line for surgery,” said my athletic bed-pusher. Hurray!

The surgeon, of course, was my ophthalmologist. She asked me how I was feeling. “Nervous but excited,” I said. Her assistant drew a purple arrow on my forehead that pointed to my left eye. I guess you can’t be too careful in a hospital. “Will you administer the ‘twilight’ anesthesia?” I asked. To my horror, she said “No.” Instead, she would give me a mild, intravenous sedative just to calm my nerves. I’d have to be fully awake, she said, so that I could look up or down as directed during the procedure.

The procedure lasted longer than I’d expected — about 30 minutes. During this time, I saw the kaleidoscope of colors that Nora MacDowell and other readers described. But I also felt pressure against my eye. So much pressure, in fact, that at one point I had to clench my fingers and toes just to endure it.

And here’s the miraculous thing. When the light show ended, I could actually see with my left eye — the very eye that was legally blind for 2 years! Even with a big, clear plastic guard taped over the eye, I could see the florescent lights in the ceiling, and the grid pattern on the plastic that covered the lights. The surgery was a success!

A nurse escorted me to the recovery room. There, David greeted me with a much-needed turkey sandwich. (Did I mentioned that David is a saint?) The nurse reviewed my after-care, which, for the next 3-4 weeks, includes no heavy lifting, bending at the waist, or strenuous exercise.  It also includes lots of eye drops to avoid infection.

Am I a happy camper? You better believe it. Thanks to a good surgeon, a toric lens, insurance through the ACA, and some financial help from the Silver Fox, I can see clearly now. From the left eye, anyway. The right eye, which isn’t as bad as my left eye, will be  remedied in a few weeks.

Cataract surgery is a scream, my friends. If you need it, just…do it!