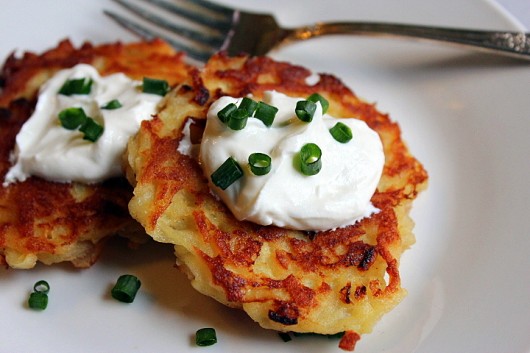 What’s so special about these potato pancakes, or Latkes? Well, they are crispy-crunchy on the outside, and creamy-dreamy on the inside. They are gluten-free, too! My step-by-step recipe:

Since the pancakes contain no leavening, they are perfect for a Passover seder. They are also terrific for Hanukkah, Christmas, Easter, or anytime you need a screamingly-delicious side dish.

To start, toss an egg and some softened cream cheese into a big bowl… 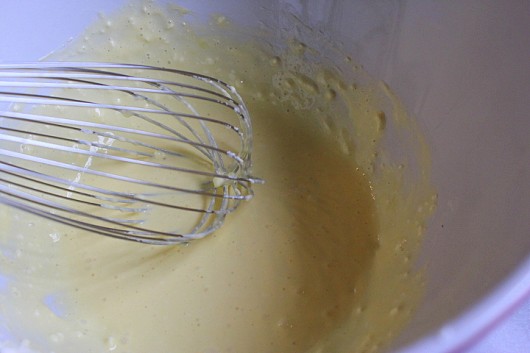 And brutally whisk them together. 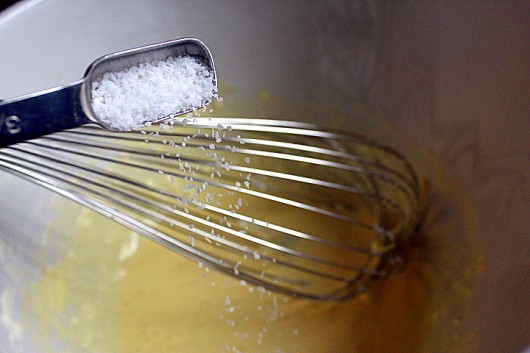 Then whisk in some kosher salt and black pepper, and set the mixture aside for a moment. 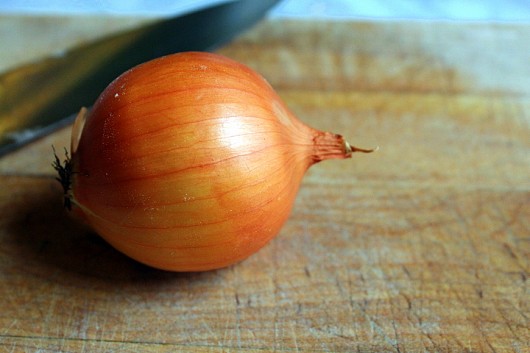 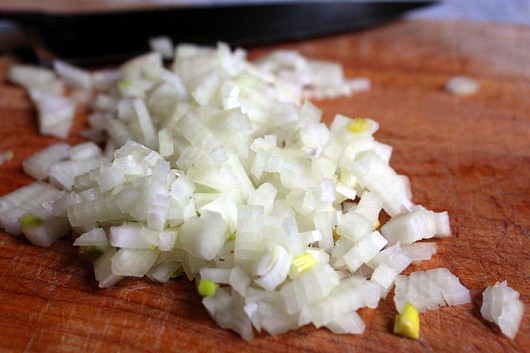 And mince it, baby. 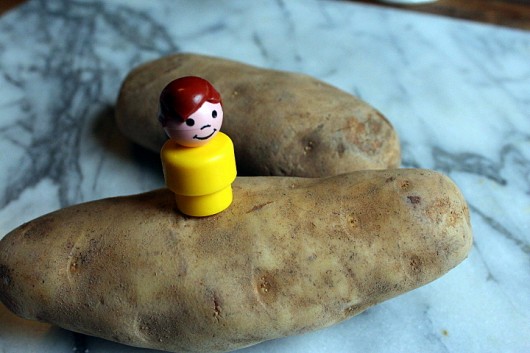 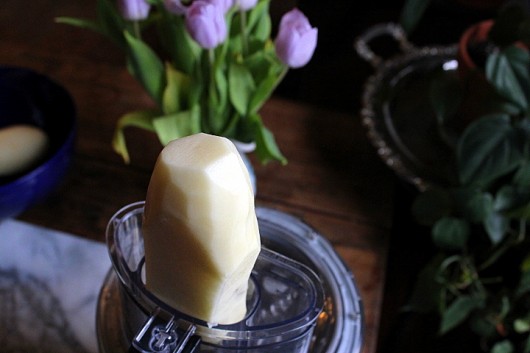 And shred them. I shredded mine on the large-hole disk of my food processor. 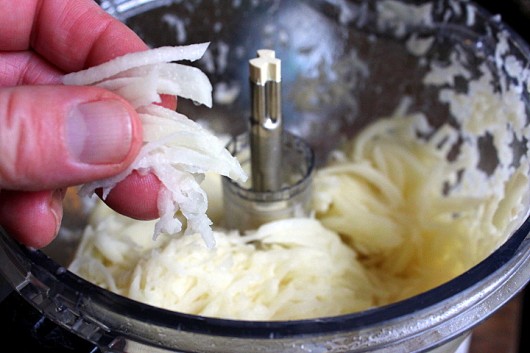 The shredding disk is terrific, because it produces the long, coarse strands that potato pancakes seem to demand.

No food processor for you? Get thee one. Or, just use the large holes of a box grater. 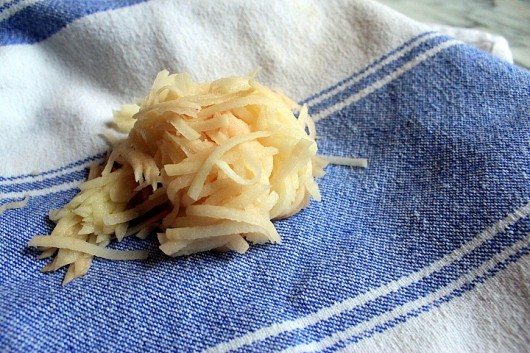 Take a handful of potato shreds, and place them on an impeccably clean kitchen towel. 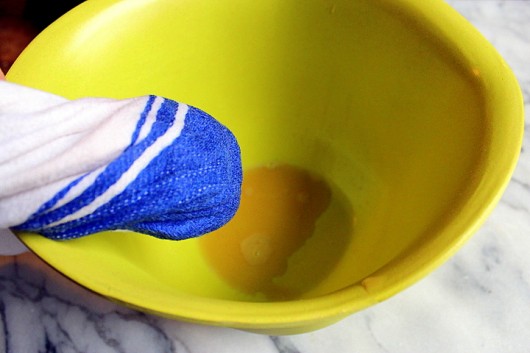 Then twist and squeeze the towel over a pale-green bowl to relieve most of the water from the potatoes. You’ll be amazed at how much water comes out! Repeat this step for the remaining spuds. 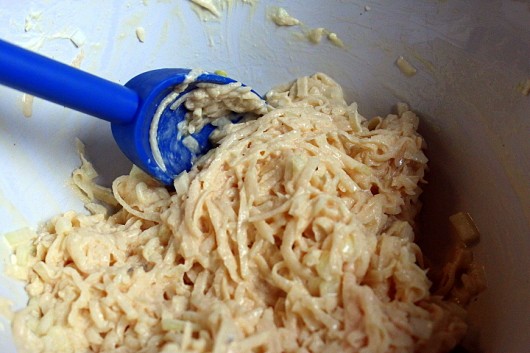 Tip the squeezed-out potatoes into the egg mixture, and stir them up with a big blue spoon. 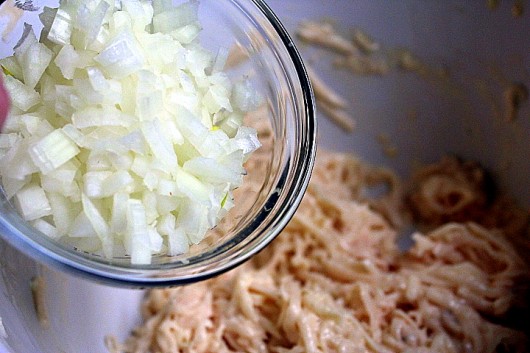 Then stir in the minced onion. 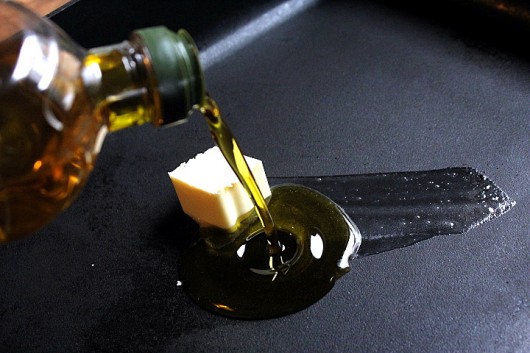 Heat some oil and butter in a large skillet. I used my inexpensive but awesome electric skillet, heated to 350°F. 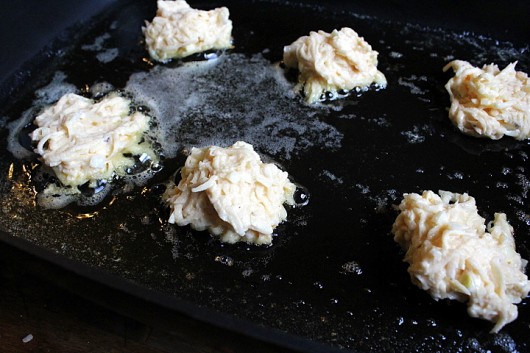 When the butter melts and its foam subsides, drop 1/4 cupfuls of the potato mixture onto the hot surface… 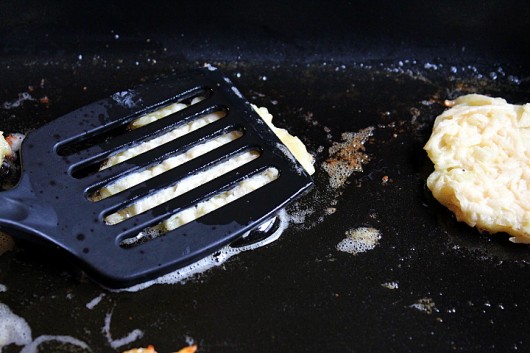 And immediately flatten each cake with a spatula. Flat cakes will fry faster and more evenly than clumpy cakes. 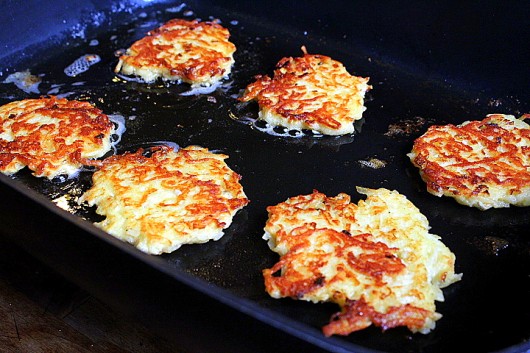 Fry until crisped and browned — about 4 minutes per side. Drain on paper towels.

Note:If you can’t serve the cakes right away, just put them on a baking sheet, and pop them into a 200°F oven for up to 1 hour. 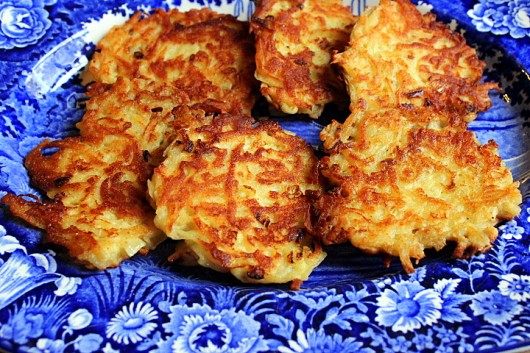 Another Note: You can serve latkes just as they are, direct from a blue and white Enoch Ware platter. Or, you can top them with applesauce or sour cream. Heck, you can even top them with a poached egg and a sprinkling of parsley! 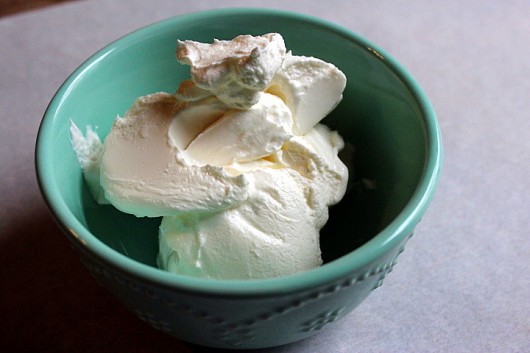 For an especially nice topping, tip some sour cream into a small bowl… 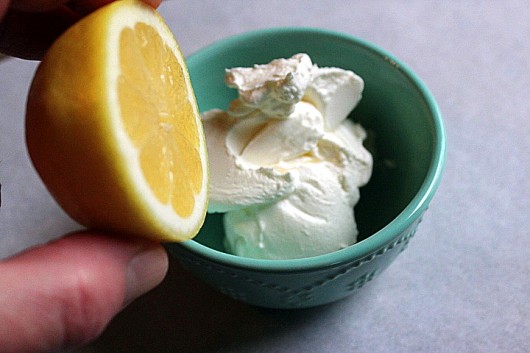 And perk it up with big squirt of fresh lemon juice. For an even perkier perk, you could add some freshly-grated lemon zest. 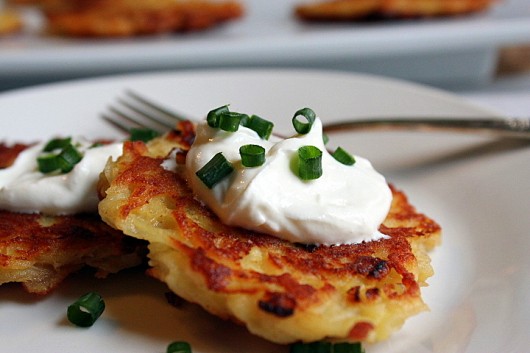 To serve, top the latkes with the sour cream mixture, and garnish with some chopped, fresh chives. Exquisite!

Makes about 10 pancakes; recipe can be doubled

These potato pancakes ("Latkes") are everything you want them to be: crisp, delicious, and a breeze to prepare.

My April, 2015 Garden Chores
Easter Recipe Round Up