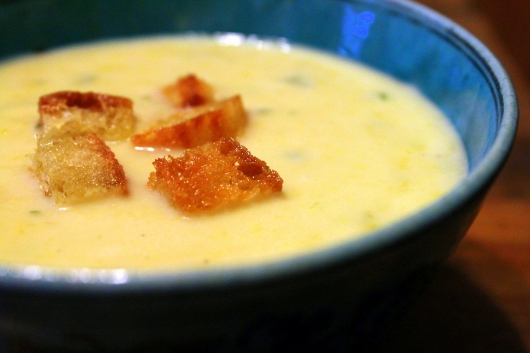 SNOW, SNOW, AND MORE SNOW: Yesterday, winter storm “Pax” dumped two feet of white on my Hudson Valley region. Thus I’m officially house-bound. To warm my body, I lit a fire in the parlor fireplace. And to soothe my soul, I prepared a pot of Leek and Potato Soup.

Are you familiar with this mildly-onion-flavored brew which the French call Potage Parmentier? It’s simple to make. It’s inexpensive, too. And it’s outrageously delicious. You can serve it hot in winter, or cold in summer. Served cold, the soup is called Vichyssoise. 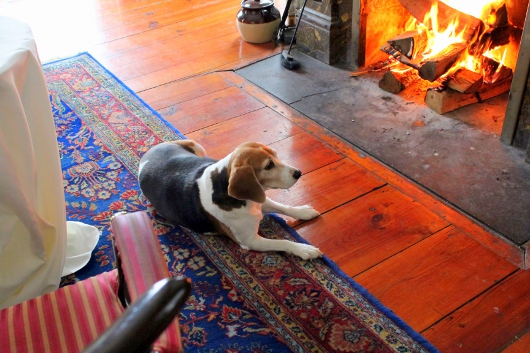 Here’s the recipe in photographic steps, followed by a photo-less (and therefore printer-friendly) copy-and-paste version: 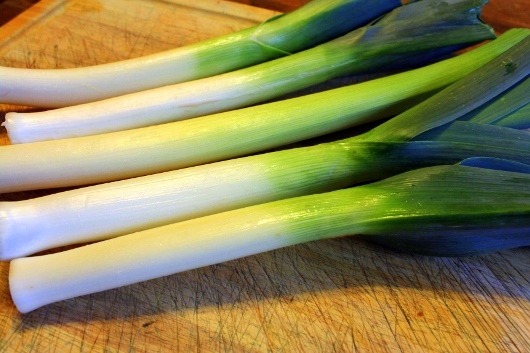 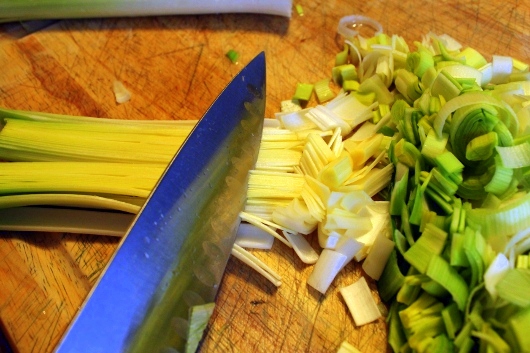 And roughly dice the white and tender green parts.

Throw the tough green leaves on the compost pile. 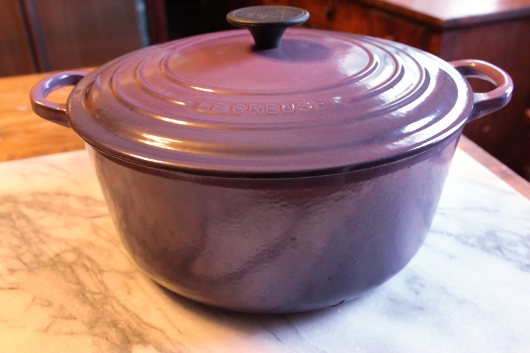 Next, grab a heavy pot, which, by all rights, ought to be purple. 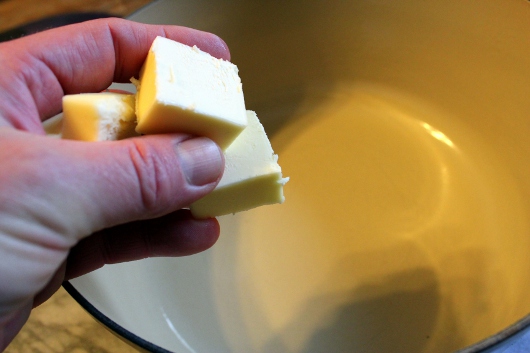 Add four tablespoons of unsalted butter to the pot, and melt them over a very low flame.  The butter shouldn’t color at all. 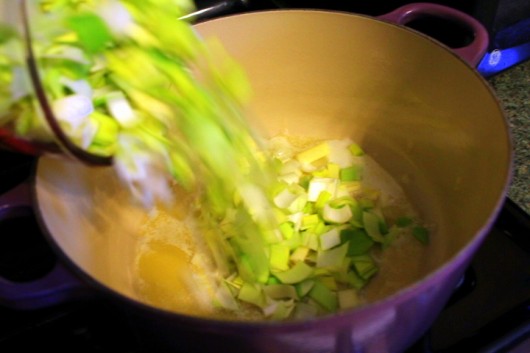 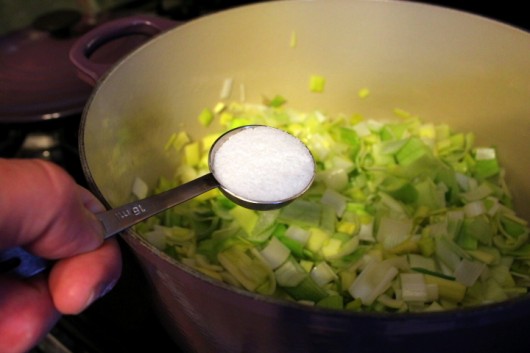 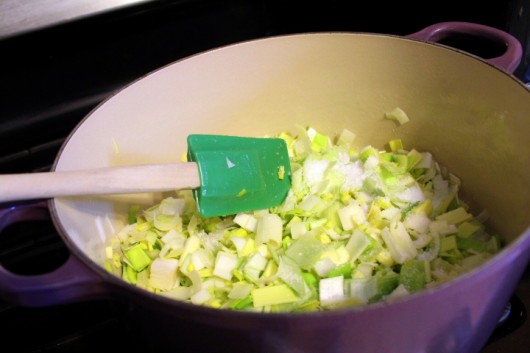 Give the works a stir with an appropriately-hued spatula… 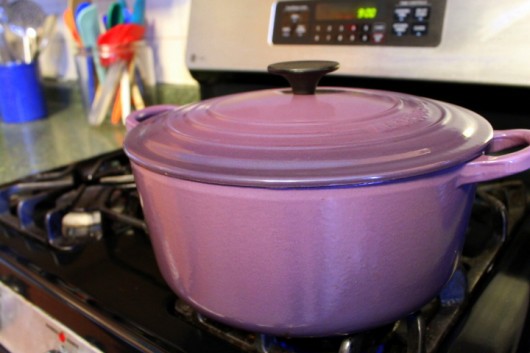 And then cover the pot, and let the leeks steam slowly (they shouldn’t color at all) until perfectly tender — 10-20 minutes. 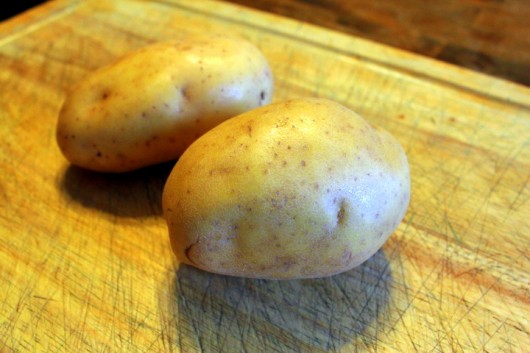 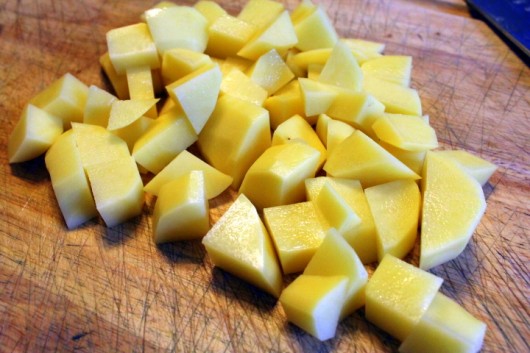 And peel and roughly dice them. 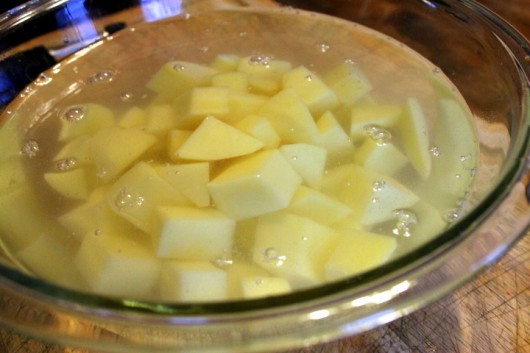 To keep the spuds from turning brown, just drop them into a bowl of cold water. 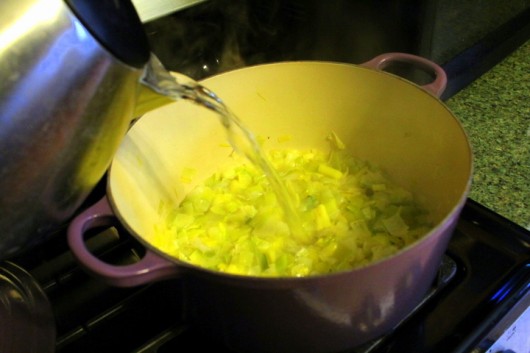 When the leeks are definitely tender, cover them with 6 cups of boiling water. 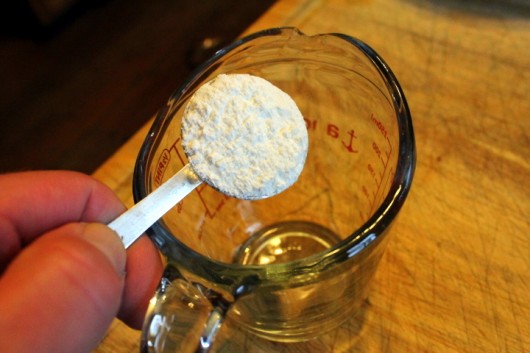 To hold the leeks in velvety suspension, thicken the liquid.  To do this the easy (and gluten-free) way, whisk together  1 1/2 tablespoons of cornstarch with one 1/4 cup of cold water. 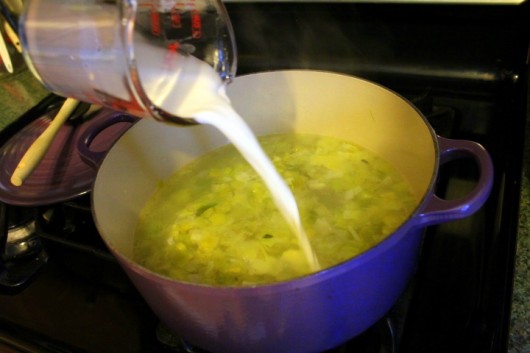 Increase the heat, tip the cold cornstarch mixture into the hot liquid, and stir constantly for a minute or two while the pot comes to a boil. 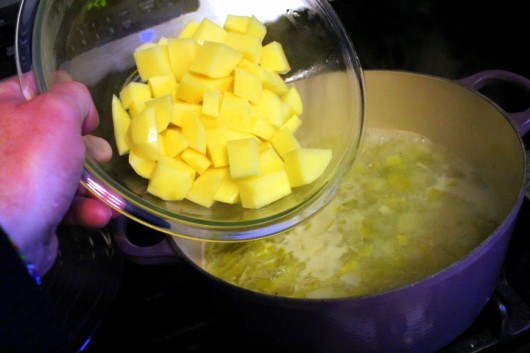 Now drain the potatoes, and add them to the leeks. 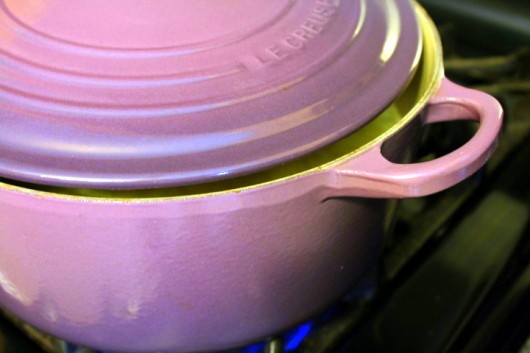 Then partially cover the pot, lower the heat, and let the ingredients simmer quietly until the potatoes are tender — 20-30 minutes. 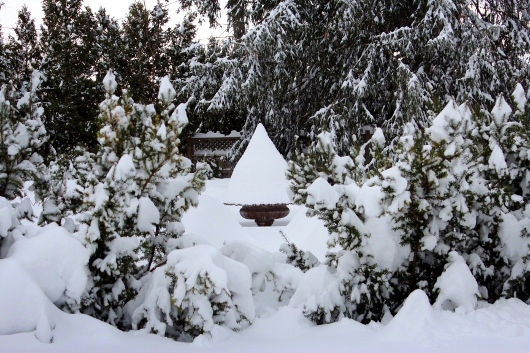 Meanwhile, look at the winter-wonderland outside your window… 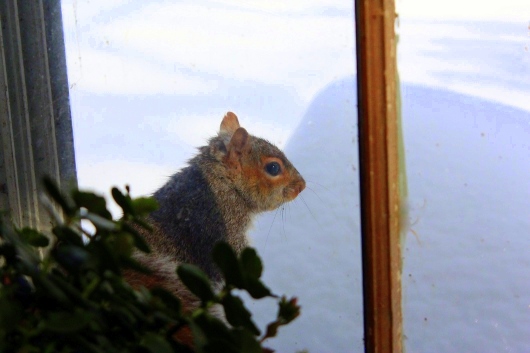 And say “hello” to the little squirrel who is observing the snow from your window sill. 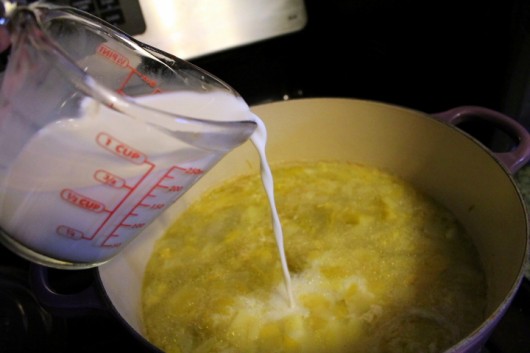 Back to the soup: Off heat, stir in 1 cup of milk, cream, or a combination of the two.

You could very well enjoy this soup as is. Just give it a sprinkling of minced parsley. 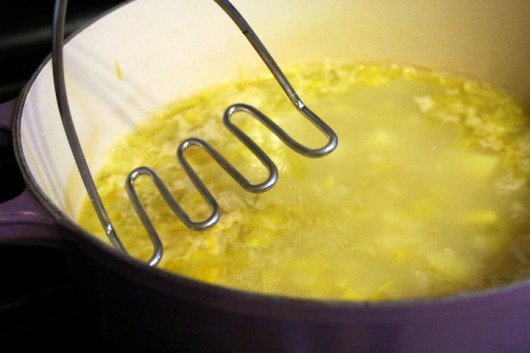 Otherwise, if you wish to serve the soup as an elegant first course for dinner, puree it.

Personally, I like my Leek and Potato Soup coarsely pureed. 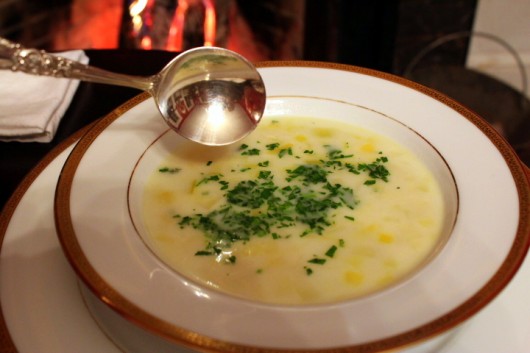 You could serve the potage in soup plates, with a sprinkling of herbs… 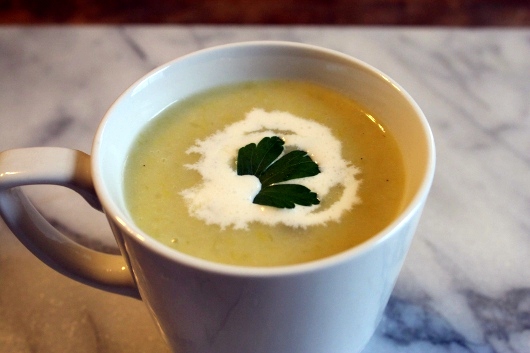 Or in a mug, decorated with a spoonful of heavy cream and a single parsley leaf. 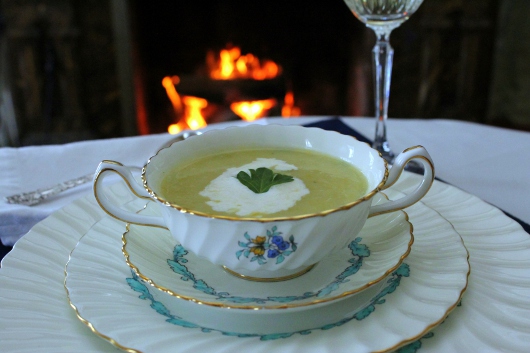 For a first-course, however, you might like to pour the soup into two-handled  Bouillon cups. Decorate these, too, with a drizzle of heavy cream and a single parsley leaf. 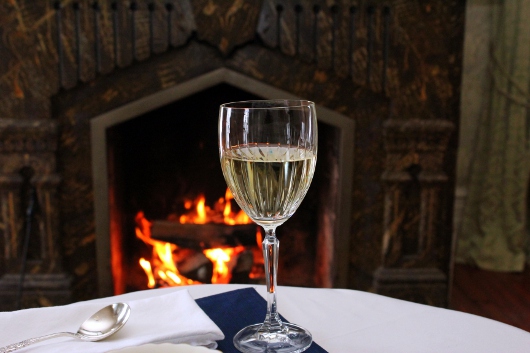 In any event, don’t forget the wine. I can tell you that hot Leek and Potato Soup and icy Sauvignon blanc is a match made in heaven.

As promised, here’s a copy-and-paste version of the above:

Leek and Potato Soup, as made by Kevin Lee Jacobs
Ingredients for 4 servings as a main course, or 6-8 servings as a first course
4 Tablespoons (1/2 stick) unsalted butter
4-5 medium-to-large leeks, the white and tender green roughly diced
1 tablespoon kosher salt, and grinds of black or white pepper
6 cups boiling water
1 1/2 tablespoons cornstarch, dissolved in 1/4 cup cold water
2 medium (2-lbs) “boiling” potatoes (such as ‘Yukon Gold’), peeled and coarsely diced
1 cup milk or cream, or a combination of the two
For flavor and decoration: A little heavy cream and some whole or minced parsley leaves for each serving

Special Equipment: A heavy-bottomed pot which will hold 4-5 quarts

1. Melt the butter in the pot over a low flame. The butter shouldn’t color at all. Add the diced leeks; stir in the salt and pepper. Cover the pot, and let the leeks steam until perfectly tender — 10-20 minutes.

2. Cover the leeks with the boiling water. Then increase the heat, and stir in the cornstarch mixture. Stir slowly and constantly for 1 minute while the brew boils.

3. Add the potatoes, partially cover the pot, and let simmer until tender — 20-30 minutes.

4. Off heat, stir in the milk, the cream, or a combination of the two.

Serve in soup plates, along with a drizzle of heavy cream and a single parsley leaf or a sprinkling of minced leaves.
For a some-what less-peasanty soup, mash the potatoes with a potato-masher before serving, then decorate with cream and parsley.
For an elegant first course (or to serve in mugs), puree the soup, then decorate as before.

The soup can be made a day or two in advance. When thoroughly cool, cover and refrigerate.

Think you’ll try my version of this simple French soup? You can let me know by leaving a comment. As always, I love hearing from you.

Don’t miss anything at A Garden for the House…sign up for Kevin’s weekly email updates!