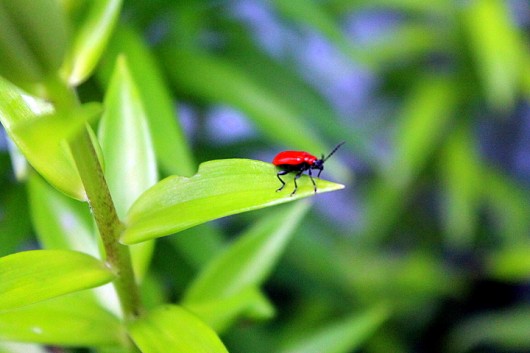 I HOPE YOUR LILIES ARE SAFE AND SOUND. Mine, alas, are not. They’ve been ravaged by Lilioceris lilii — the scarlet-topped insect you see pictured above. More about this “Lily Leaf Beetle,” and the cartwheels I’m performing in order to save my plants: 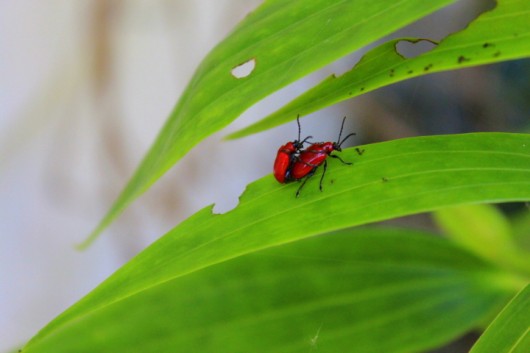 I apologize for the picture above. But I wanted you see how the beetles perform unspeakable acts of intimacy in broad daylight. And in public.

If you are a member of a certain group of activists, you’re probably clutching your pearls just now.

And who can blame you. 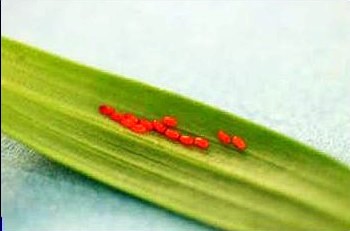 After her little roll in the hay, the female beetle lays eggs on the underside of leaves. If you find these clusters of orange capsules, by all means destroy them. At once. 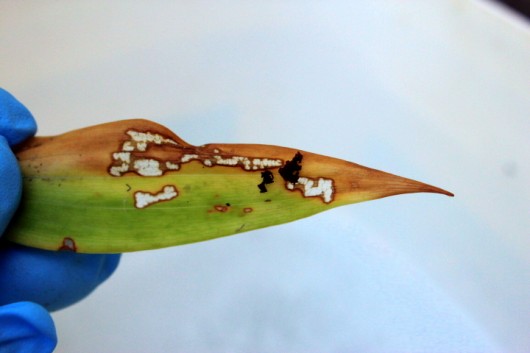 Otherwise, hatching will occur in about 8 days.  The larvae will promptly feed (and feed and feed) on the lily leaves.

And by the way, there is a reason I’m wearing gloves in the above photo. 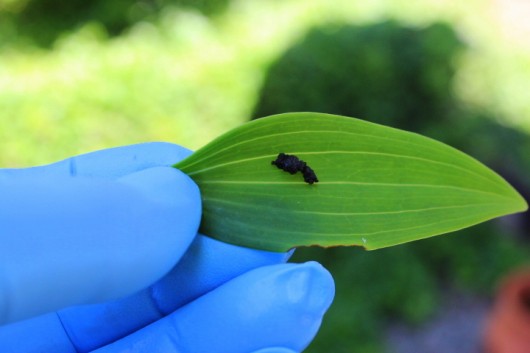 As the larvae eats,  it covers itself in its own excrement.

After 16-24 days of continuous feeding,  the slug-like larvae falls to the ground and pupates in the soil.  Adults emerge in 16-22 days, and promptly eat their way through leaves, stems, buds and flowers. But they do not mate until the following spring. They spend winter either in the garden or in nearby woods, which can sometimes be a great distance from their host plants (lilies).

I hope you never have to confront the Lily leaf beetle. But should you discover the beast in your garden, and you have only a few lilies, proceed this way: 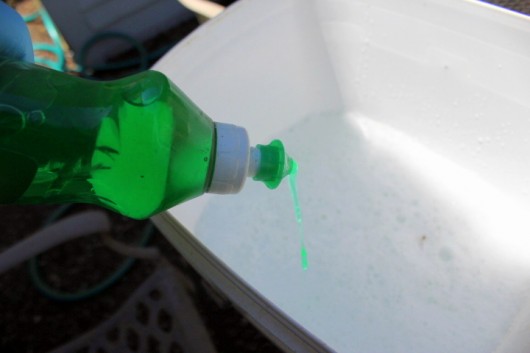 First, pour water and a little liquid dish-washing soap into a bucket or jar. 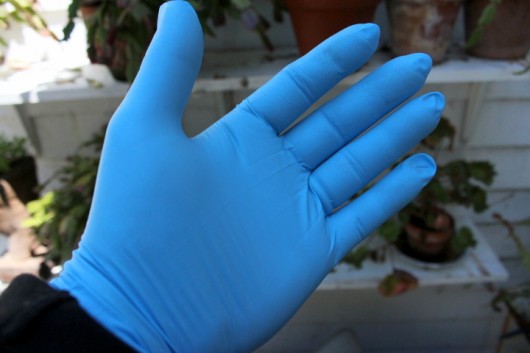 Next, don a pair of surgical gloves. Blue gloves are particularly nice. 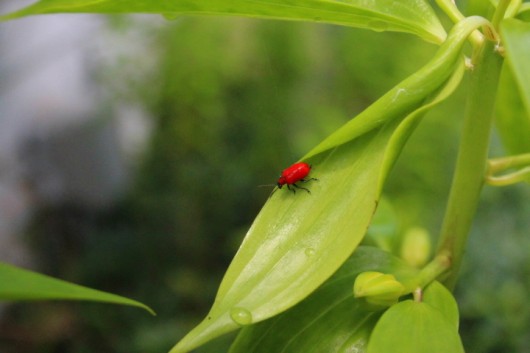 Squish, with your fingers, every adult beetle you can find.  Drop the dearly-departed into your bucket or jar of soapy water. 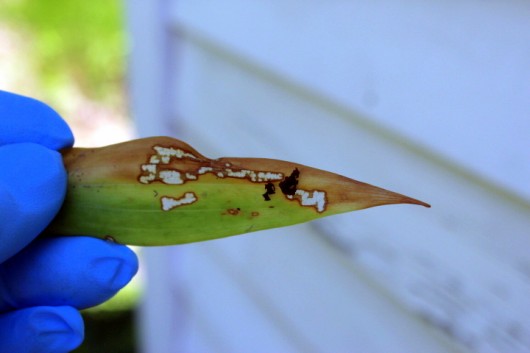 Squish also the excrement-covered larvae. Too revolting a job for you? Then simply detach the larvae-covered leaf, as I do, and drop it into the bucket.

Now, if you have lots of beetle-battered lilies, you probably won’t have the time or energy for hand-picking. In that case, you can spray your plants with Neem. Neem,  an organic insecticide, is available at most garden centers.

The recent arrival of the lily leaf beetle in Boston has complicated lily culture and gardeners throughout the area should be on the lookout for this insect. The lily leaf beetle, native to Europe, was discovered near Montreal, Canada in 1945. Its damage was limited to the Montreal area for decades, but recently it has spread to the south and west. The beetle was first officially sighted in Cambridge, Massachusetts in the summer of 1992. Many gardeners in the area believe it came in with bulbs shipped from Europe. The beetles are strong fliers and excellent hiders. They have spread as much as 150 miles from Boston, in many cases with the assistance of gardeners. At present the infested area in the USA reaches into all of the New England states, including southern Connecticut and northern Vermont. Not all areas are yet infested and gardeners who are transplanting bulbs and other garden plants should be careful not to move these beetles to an uninfested area.

In closing, I’d like to say that Lilioceris lilii is a threat only to Lillium (true lilies) and Fritillaria. It is not attracted to plants that have “lily” in their common name, such as daylilies or Lily of the Valley.

Have you seen the lily leaf beetle in your garden? You can let me know by leaving a comment. As always, I love hearing from you.

Related Posts:
How I Smother Weeds with Newspaper
A Late-Spring Garden Tour
The Fall Webworm