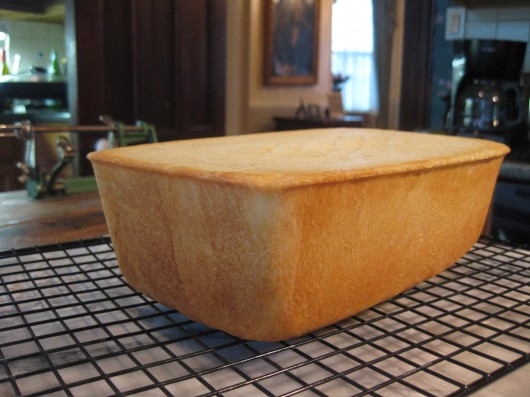 OKAY, I’LL ADMIT IT. I’m addicted to French sandwich bread, or Pain de Mie. What a versatile loaf! I use it for sandwiches, toast, French toast, croutons and canapes. Pain (pronounced “pan”) is French for “bread,” and mie (pr. “mee”) means “crumb,” or “interior.” And the crumb in this instance is soft and moist. Yet the bread is so deliciously dense that you can cut it into paper-thin slices. My New Year’s resolution is to have this lovely loaf on hand at all times. Fortunately, it is incredibly easy to make: 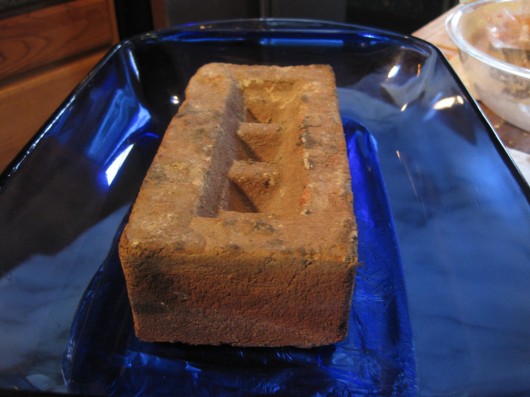 To achieve a rectangular, and practically crust-less loaf, you’ll need to bake the dough in either a Pullman Pan (a special, extra-long loaf-pan with a sliding lid), or in a regular loaf pan with an improvised cover of some sort. I have found that a casserole dish placed over the loaf pan, and weighted down with a brick, works perfectly well.

Special Equipment – a standing mixer, outfitted with a dough hook; a large bowl; a pastry-scraper; a rolling pin for smashing the butter, and one buttered 8 cup (or slightly larger) loaf pan with fairly straight sides.

1. Mixing the dough — Pour flour, milk, salt, and the yeast mixture into the bowl of your standing mixer. Blend at low speed for about 10 seconds. Then increase the speed to medium (number 4 on my model) for 2 minutes, or just until the dough masses on the hook attachment. Let rest for 2-3 minutes; blend at medium speed for another 2 minutes. Let rest again, while you prepare the butter. 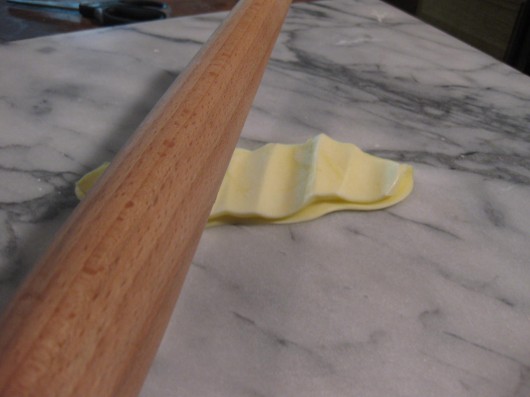 2. Pounding the butter — Use your rolling pin to smash down the cold butter. You want the butter to become malleable, but not so soft that it becomes oily. Scoop up the flattened butter with your pastry-scraper, and carry it to standing mixer.

3. Adding the butter to dough — With the mixer running at medium speed, add the butter one 1/2 tablespoon or so at a time. Stop the machine once all of the butter has been incorporated into the dough.

4. The first rise — Dump the dough, which should be sticky but elastic at this point, onto a lightly-floured board. Pat the dough out, then fold it over on itself 3 times. Place the dough in the large bowl, cover the bowl with plastic wrap, and let it slowly rise until tripled in volume — about 3 hours in a 75 degree kitchen.

What’s that? You don’t heat your house to 75 degrees? Neither do I. Consequently, to help the dough rise to triple in a 3 hour period, I set the bowl of dough on an ordinary heating pad. The pad, depending on just how cold my kitchen is on a particular day, is set either on the low or medium setting.

5. Deflating the dough, and the second rise — With floured fingers, deflate the dough and pour it out onto your lightly floured board. Then quickly wash out and dry the bowl. Fold the dough over on itself 3 times, just as you did in step 4. Return the dough to the clean bowl, cover, and let rise to almost triple — which this time will take about 2 hours. 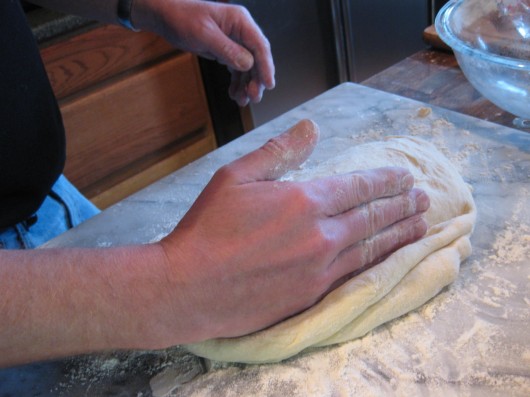 6. Forming the dough, and the third rise — Pat the dough out, fold it over on itself, then use the side of your hand to seal the edges. As you can see, I prefer the karate-chop sealing-method. 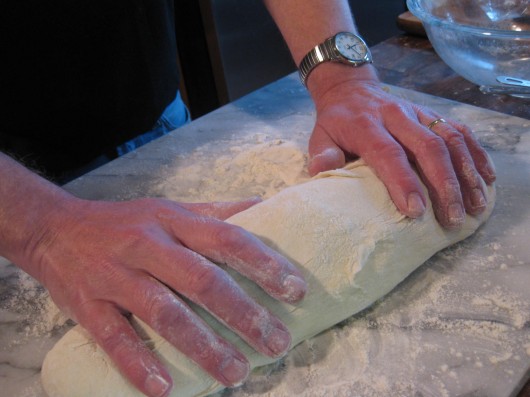 Flip the dough so the sealed edge is on the bottom.

Now karate chop a ridge down the center of the dough. Then fold at the ridge and karate chop again to seal. All this manipulation is to create surface tension. Repeat the karate-chopping and folding once or twice more, until the surface of the dough appears fairly smooth. Then pinch the underside of the loaf to seal. 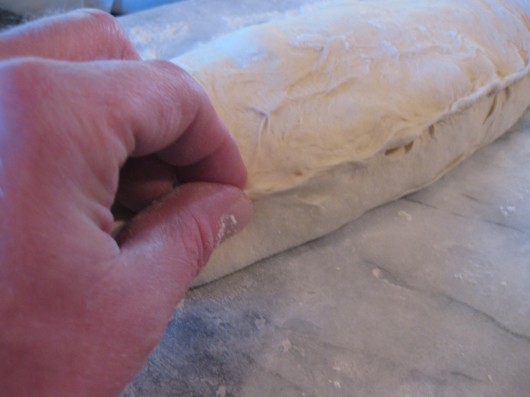 There is nothing more satisfying than pinching the seam of dough. 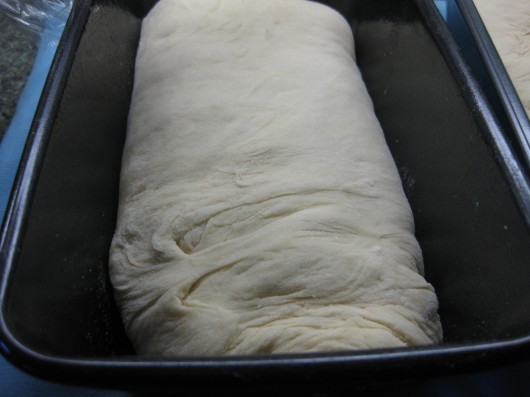 Place the formed loaf in its pan; cover with plastic wrap. Let rise until the dough reaches 1 inch (not more!) from the top of the pan — about 30 minutes. 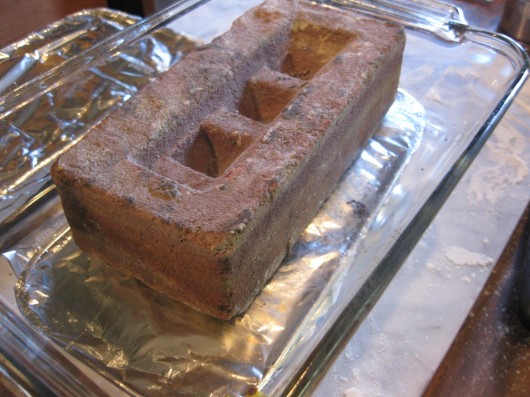 7. Baking – 40 minutes at 435F. Tightly cover the pan with a sheet of buttered aluminum foil. Then place an oven-proof dish, such as a Pyrex casserole dish, oven the pan. Place a brick or some other oven-proof weight in the dish.  The goal is 5 lbs of weight to hold the loaf down. 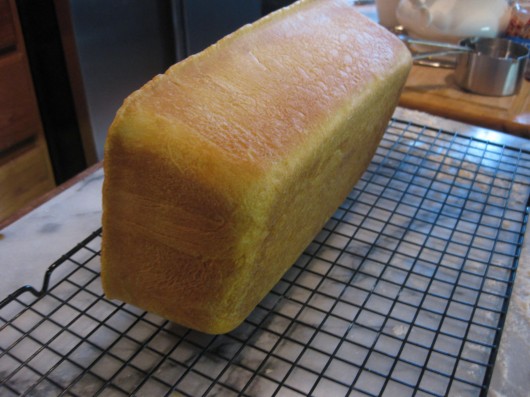 8. Remove the weights and aluminum foil, and gently release the loaf onto a cooling rack. The loaf will cool faster if you set it on its side, as above.

In a feat of self-restraint, try not to gobble the bread while it’s still warm. Let it cool completely, and you’ll find that you can slice it just as thinly as you like. 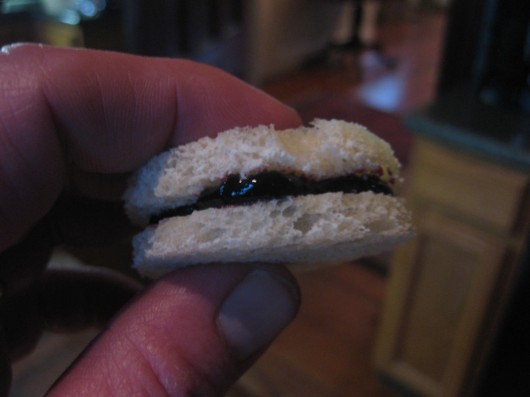 Think you’ll try Pain de mie? I certainly hope so.  It’s as fun to make as it is to eat. Furthermore, if you want to make a proper cucumber sandwich or a simple “Jam Penny” (above), you simply have to have this bread.

Eye-Candy for the Winter Weary
What To Do In January