WHAT FLOATS MY BOAT IN AUTUMN? The potato-kale galette pictured above. This is pure music, folks, a glorious duet of seasoned kale and golden garlic sandwiched between a crust of potatoes so thinly sliced and perfectly fried you’ll think you’re eating potato chips. Yes, potato chips, but with a soft, creamy interior. I plan to serve this at a small dinner party here later this month, and maybe again at Thanksgiving. Here’s the recipe:

Special Equipment:
A heavy skillet, either non-stick or well-seasoned cast-iron, 12-inches diameter; a heavy 10-inch skillet to weight down the galette as it cooks; an adjustable slicer for the potatoes is helpful 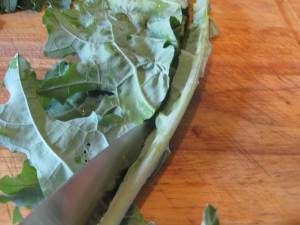 1. Prearing and Cooking the kale — fold kale leaves in half, and slice along the edge to remove the fibrous stem, as shown. Then dump the leaves in a pot of boiling water and let them cook, uncovered, until tender — 4-6 minutes. Drain in a colander and run cold water over them to stop the cooking. Then grab handfuls of leaves and squeeze out all the moisture you can. Chop the clumps of leaves into small pieces. Set aside. 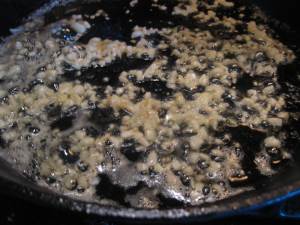 2. Sauteing the garlic and kale — In the 12-inch skillet, add a glug of olive oil and the 2 Tbs butter. Heat over a medium flame until the butter melts and its foam subsides. Then add the garlic and saute until it turns golden. Add the chopped kale to the garlic and saute for 2 minutes, stirring constantly. Season with a pinch each of salt and pepper. Remove to a bowl; wipe out skillet. 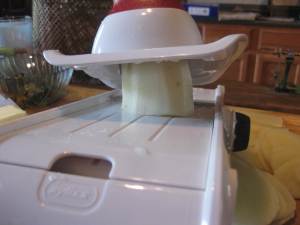 I’ll have have you know that I bought a slicing gadget just for this recipe. It cost $38 and frankly, it was money well spent. Just look at those perfect, 1/16th-inch slices. If you don’t have such a gadget or “mandolin,” use a knife, and try your best to slice the potatoes as thinly as possible. 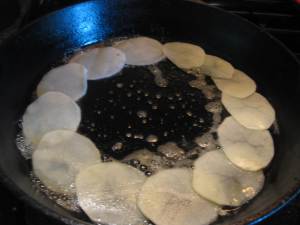 Making the galette – pour another glug (about 2 Tbs) olive oil into the skillet, along with 2 more Tbs butter. When the butter stops foaming, arrange 1/3 of the potatoes, slightly overlapping as shown, in a single layer in the skillet (this is a little like making Tarte Tatin). Be sure to cover the entire bottom of the skillet with slices. Then Pour a thin film of olive oil over the potatoes. 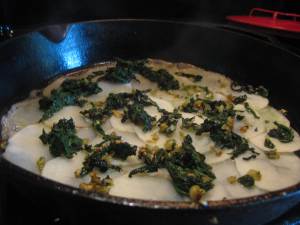 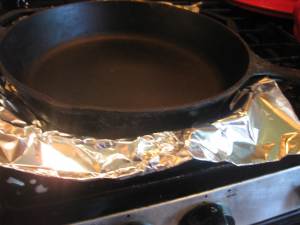 Weighing down the galette — Spray with non-stick spray a sheet of aluminum foil, and set this on top of the potatoes. Then place the second, smaller skillet on top of the foil to weigh the galette down. Continue to cook over a medium flame for 12-15 minutes — you want the bottom of the galette to be golden brown.

Turning the galette – (No pictures; this is a two-handed job.) Remove the foil, set a dinner plate or baking sheet over the galette (as shown) and then, wearing oven mitts, invert the two. Then slide the galette back into the skillet, its uncooked side now facing down. Cook for another 12-15 minutes uncovered. 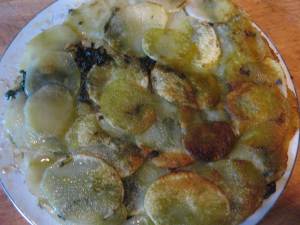 Final unmolding — Set a serving plate or platter over the skillet, and invert as before.

Care for a taste?

Let me know if you’ll make this galette. You’ll find beautiful potatoes, kale and garlic at your farm-market this month (if you didn’t grow these staples in your garden).

Oh. If you want an even easier galette, try this one.

How to Divide & Conquer the Boston Fern
Tell the FDA: Label My Food